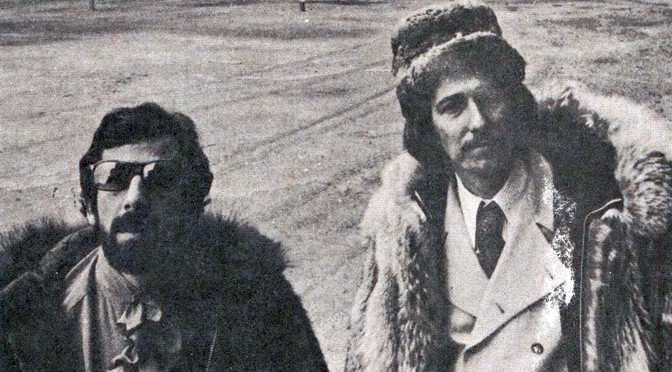 Issue #8 also tweaked the layout with a 90-degree shift of the area above the fold. The first seven issues were laid out like a regular newspaper. This issue features the first “cover of the Rolling Stone” as we know it with a single image and a headline or two. Open it up and flip it sideways for page 1, which somewhat confusingly repeated the nameplate. (See below for what this looks like…)

This is the layout that Rolling Stone would maintain until issue #142 in 1973 when it expanded into a larger magazine format without the fold at all.

My favorite part of this issue is a letter to the editor from the drummer of a rather famous rock and roll combo whose new album had been panned in issue #5.

The idea that this little underground newspaper was being seen, read, and acknowledged by the very rock royalty it was covering must have thrilled the 22-year-old Jann Wenner. Then again, according to Joe Hagan’s Sticky Fingers, by this time Wenner had already received a cease-and-desist letter from the Rolling Stones’ manager, Allen Klein, claiming misappropriation of their name as well as violation of their copyright. But at least Charlie had a sense of humor about it!

Full-page ads: Father is Child to the Man by Blood, Sweat and Tears on Columbia, God Bless Tiny Tim by Tiny Tim on Reprise, The Super Super Blues Band by Howlin’ Wolf, Muddy Waters & Bo Diddley on Checker, and the Billboard Bookshelf.

Half-page ads: Boogie with Canned Heat by Canned Heat on Liberty, ABC Records (“A Groovy Future” ad highlighting Steppenwolf, the Dirty Blues Band, Eden’s Children, and others), Like It Is by Donovan on Hickory, For What It’s Worth by the Staple Singers on Epic, Music Inspired By The Rip Roarin’ Electrifying Sound Of “Bonnie And Clyde” by Charles Strouse on Epic, and Vincebus Eruptum by Blue Cheer on Philips.

Reviews: History of Rhythm & Blues on Atlantic (no byline), Vincebus Eruptum by Blue Cheer on Philips (Michael Geary), Axis: Bold As Love by Jimi Hendrix on Reprise (Jim Miller), Crusade by John Mayall’s Bluesbreakers on London (no byline). Barret Hansen (a.k.a. Dr. Dimento) wrote a feature-length review of We’re Only In It for the Money by Frank Zappa on Atlantic: “In the right circumstances, the first hearing of this album could well be the most profound record-listening experience a person has ever had.”

Features: A Bloody Battle Over Monterey Pop Festival by Jann Wenner, The Rolling Stone Interview with Mike Bloomfield by Jann Wenner, The New Album Art by Thomas Albright, The Sound of Boston: Kerplop by Jon Landau, and Steve Miller on the British Groups: “Queer Bits in Underwear.”

This issue also featured the debut of the gossip column by “John J. Rock,” a pseudonym for Wenner. It featured recording news from the Jefferson Airplane and Moby Grape, some bitchy asides about publicist Derek Taylor and Los Angeles, including the hilarious tidbit that one of LA’s first underground newspapers had “installed a timeclock for employees.” The only really scandalous item was that Big Brother and the Holding Company got drunk at their CBS Records signing party and one member of the band stood up on a table and flashed Clive Davis and asked him, “Can you dig it?”

Ralph Gleason used his “Perspectives” column to rail against the bigotry and hypocrisy of the straight world and to argue for the legalization of marijuana.

The law will be changed. I don’t know how soon but it is obvious you cannot enforce it without busting the Establishment’s own children (judges’ sons, diplomats’ sons, ballet dancers, the son of the California Assembly speaker, etc., etc., etc. Prohibition was unenforceable for precisely the same reason. Too many people.

Well, you’d think. I guess Gleason couldn’t imagine the amount of selective enforcement that would take place over the next fifty years. I suppose we’re getting closer as more and more states decriminalize. But who knows? Let’s check back in another 50 years to see how much progress we’ve made. 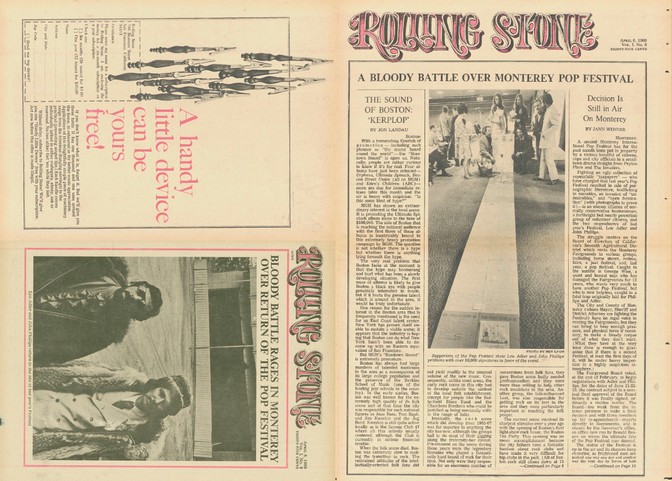