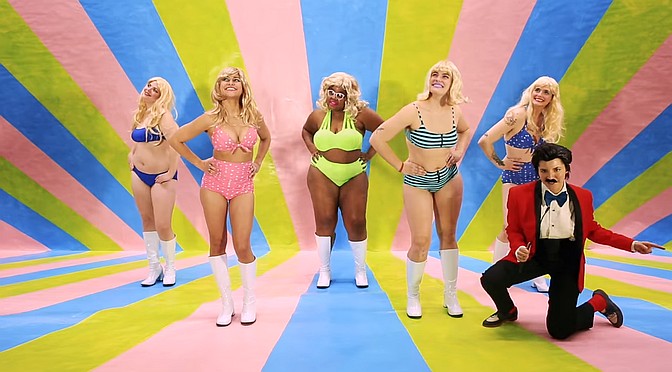 Directed by Caroline Rose. From Loner, out now on New West.

You gotta love the idea of a woman taking the Farfisa-driven genre of sixties frat rock and updating it with a feminist twist.

We’re gonna give you everything you’ve ever wanted
Hang a banner with your name upon it
Pour three shots in a glass, call it a martini
All you’ve got to do is put on this little bikini
And dance

Then again, if you listen to the Pleasure Seekers’ 1965 stomper, “What a Way to Die,” you’ll realize that female garage bands have been socking it to the man from the get-go.

Rose told Consequence of Sound, “I love this one so much, it’s my riot grrl feminist surf punk anthem. It’s about so many things, but mostly about being female-identifying in the entertainment industry and the standard we’re supposed to live up to. This one’s best listened to with middle fingers up.”

And in a press release she added, “A lot of my aesthetic tends to be very tongue-in-cheek, so I wanted to take a serious subject, in this case misogyny, and just sort of turn it around to laugh at it. I think satire can be used as an incredible tool to take the power away from the powerful when necessary. It was important to me to make sure the video was body positive. When we think of ‘girls in bikinis,’ the tendency is to see tall white models with perfect bodies. I knew that would be missing the point of the song.”

Directed by Horatio Baltz. From Loner, out now on New West.