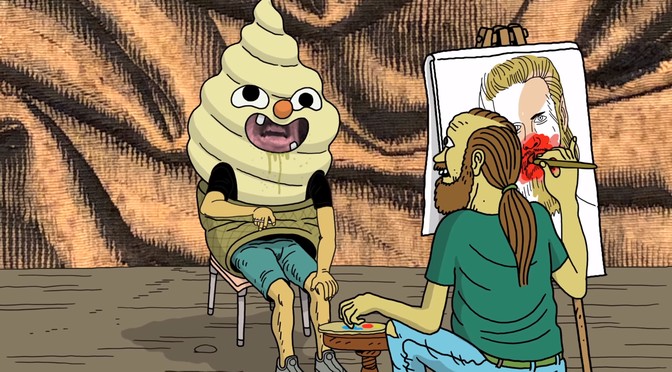 Directed by Chad VanGaalen. From God’s Favorite Customer, out now on Sub Pop.

This video from Strand of Oaks freaked me the fuck out when we posted it last year. In the best possible way, of course. But freaky just the same. To say animator Chad VanGaalen has a way with imagery is to say it’s crackers to slip a rozzer the dropsy in snide, unless you put one grunch (but the eggplant) over there.

“Date Night” is my favorite track off of Father John Misty’s new album, God’s Favorite Customer. It’s two and a half minutes of free association mumbo jumbo that turns me on. The accompanying video is just as kooky and two times more colorful. There’s a cat licking its butthole.

I love the acoustic guitar tone and the “woo hoos” that make it sound as if this were done in three takes, max. It’s not over-thought. It’s not slick. But it’s such a great little stew of the things I love about FJM that it gives me hope that he hasn’t completely lost his humor. Or his mojo.