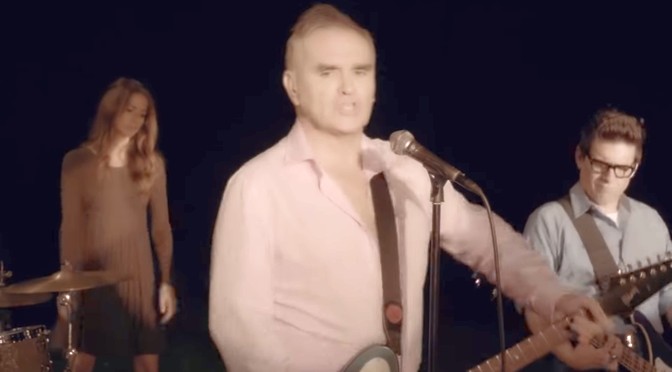 Video: Morrissey – “Back on the Chain Gang”

Morrissey - Back on the Chain Gang (Official Video)

Single out November 23. Also on upcoming double-vinyl reissue of Low in High School.

I’m something of a Morrissey apologist but this is not a great cover. Moz’s clunky guitar player doesn’t nail the fluidity of the Pretenders’ original lead guitar line. That part was created by Rockpile’s Billy Bremner, who Chrissie Hynde and producer Chris Thomas brought into the studio a month after James Honeyman-Scott died of a drug overdose. I had always assumed it was Honeyman-Scott playing on this single, but nope.

It still boggles my mind that Morrissey is so faithful to his thoroughly mediocre backing musicians. He’s stuck by guitarists Boz Boorer and Jesse Tobias since 1991 and 2005, respectfully. Those guys might not be able to play Bremner’s lead guitar part properly, but I can think of somebody who could…

Morrissey told Rolling Stone: “I think the original can safely be counted as a pop classic, and as always with the Pretenders, of the brain as well as the loins. Chrissie is always ready to do something before anyone expects it, and for me that’s a well-developed artist. Chrissie is one of my longest and enduring friendships. I don’t have many. Chrissie is the funniest person in the world, yet she has absolutely no sense of humor. We have been in many absurd situations – all her fault, of course. I know she’d marry me tomorrow, but she’s already had 11 husbands and she’s always being spotted digging in the garden at midnight.”

And that’s why I still love this guy. On his curious decision to pose with a guitar he explained, “I wanted people to see that I can play as well as Jeff Beck. I wanted them to, but they never will!”

Classic Moz. I still wish he, Noel Gallagher, and Russell Brand would be the judges for a singing competition. It would be the greatest television experience of all time.

Video: The Pretenders – “Back On The Chain Gang”