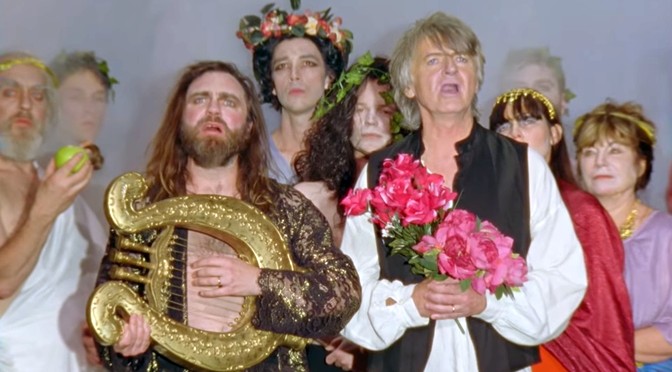 Directed by Sam Kristofski. From Lightsleeper, out August 24 on Lester Records.

Eros was the Greek god who became Cupid when the Greeks gave way to the Romans. You probably associate one—or both—with the tag “the god of Love,” based primarily on the Valentine’s Day cards that you surreptitiously delivered to your secret someones in elementary school.

However, the real subtitle for Eros is “the god of Desire,” which is something wholly separate from—though it sometimes intersects with—Love, and which probably explains why the winged boy is typically shown—as in the video for Neil and Liam Finn’s “Back to Life”—with a bow and arrow. To borrow the title of a Kip Hanrahan album: Desire Develops an Edge. And the edge of Desire is arrow-sharp.

The video is shot as a pantomime which, coincidentally enough, goes back to the ancient Romans, even though in this execution (like many in this genre) it appears as a variant of a silent movie from the dawn of the motion picture age, when there were no voices, just dialog cards. “The more we sing, the less we have to say,” the duo, well, sing.

“Back to Life” is a retelling of the story of Orpheus and his wife, Eurydice. In the original telling (in which Neil wasn’t on piano and Liam on fake lyre), Eurydice died and went to the Underworld. Orpheus followed her there and by performing for Hades was able to convince the god of the Underworld to allow Eurydice to return to life, to return to the surface. Hades allowed this but made one stipulation: Orpheus was to go first and Eurydice was to follow. “Don’t look back,” Orpheus was told in no uncertain terms.

And we know how that plays out.

Chances are, the sweet harmonizing voices of Finn père et fils are such that they, too, could make the chthonic journey and bring back the light.