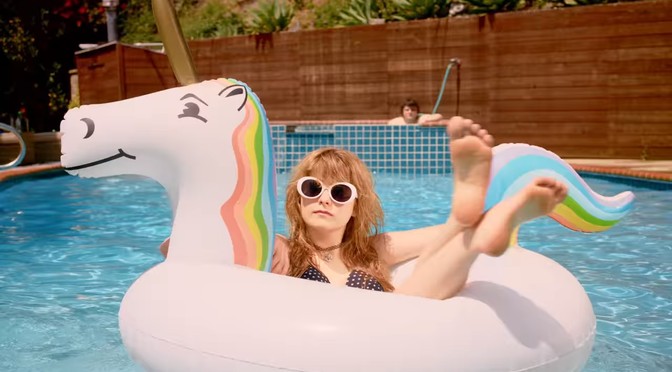 Directed by Scott Stuckey. From The Make It All Show, due May 4 on El Camino.

Check out the kids in Skating Polly living out their success fantasies.

Skating Polly is a family band from Oklahoma made up of step-sisters Kelli Mayo and Peyton Bighorse and brother/drummer Kurtis Mayo.

Kelli Mayo says, “We first wrote ‘Hollywood Factory’ after I filmed a pilot for a TV show and the possibility of it getting picked up was all I could think about for a while. The lyrics were meant to poke fun at the idea of going to Hollywood and selling out, or at least trying to sell out if Hollywood will have you. Anyway, it didn’t get picked up and we kinda swept the song under the rug with it, but right before we went in to record the album, we decided to work on it again, this time with Kurtis on board as our third member. We made the lyrics darker at some points and just more sarcastic overall. Despite the sarcasm, it’s probably the most poppy song on the record and the most cheerful one for sure!”