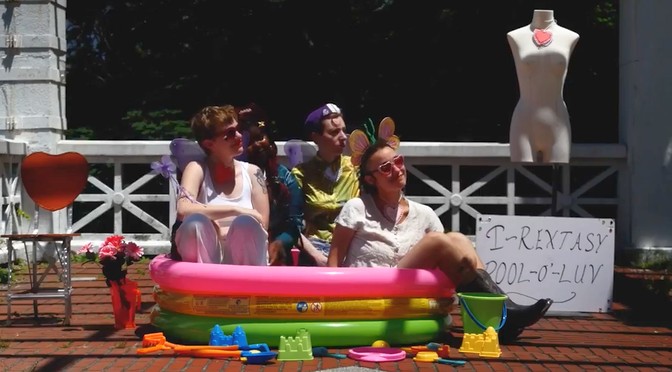 Single out now on Danger Collective.

When I was in college we brought a kids pool to campus. We named it Tony and filled it up on the quad next to the chapel. Shortly after we got it all set up, somebody was having a wedding and asked us to move our pool. I was outraged and indignant at the time, but now I can see that it was a fairly reasonable request. You don’t want a bunch of obnoxious, half-naked lunatics photo-bombing all your wedding pics.

T-Rextasy has a kids pool in their new video. They named theirs the “T-Rextasy Pool-O’-Luv” which is a pretty good name too.

Why don’t you come over and we’ll hang out?
Oh just give me a time and place
Be my friend, girl
Be my girlfriend
I don’t know how I want this to end

I like the call and response vocals and the crunchy guitars. “Fun rock,” indeed.