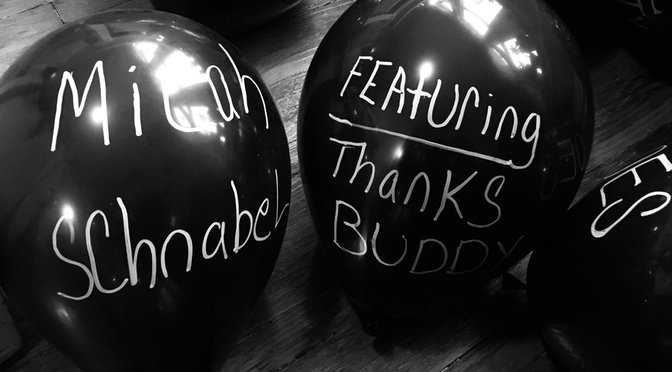 From the upcoming album, The Teenage Years Of The 21st Century.

Schnabel’s “Oh What A Bummer” from 2017’s Your New Norman Rockwell has become my definitive song of the current era. There’s a line in it that gets me every single time: “But now I’m a green participant ribbon of a human being just trying to break even in life’s gas station slot machine / I am that kid on the far end of the bench just happy to be on the team / with a giant foam finger that says LIVING THE DREAM.” Gulp. When I saw he was selling a t-shirt with that on it, I immediately ordered one.

“New Shoes” is something of a companion to that song. This time around he’s “got a bad case of ‘innocent people being murdered by angry white men’ blues,” and he narrows down the source of the problem: “this toxic masculinity is bumming our entire human scene.”

The video features Vanessa Jean Speckman cheerfully flossing and frugging and popping balloons with lyrics on them, “Subterranean Homesick” style.

Micah Schnabel is a great guy and he’s one of the hardest working men in show business. If he comes near your town, either solo or with Two Cow Garage, you should go see him. Buy some stuff from him so he can keep on doing his thing.