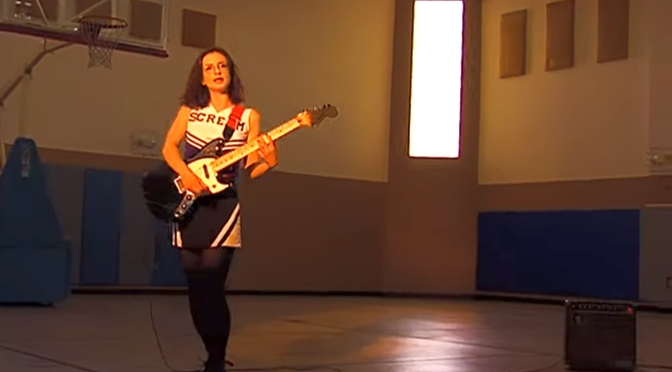 Directed by Ambar Navarro. From Midnight, out now on Saddle Creek.

Stef Chura grew up in Alpena, a small town on Lake Huron way up north in Michigan. For fans of Michigan garage rock Alpena is best known as the birthplace of Dick Wagner and his bands, the Bossmen and the Frost. Wagner went on to play with Alice Cooper and Rock ‘n’ Roll Animal-era Lou Reed.

Alpena is also the home town of Matt Southwell of Bang Sugar Bang. Before that, Southwell played with my pals the Vantrells.

So Alpena’s rock and roll bonafides are legit.

And now we’ve got Stef Chura, who was an Alpena cheerleader in eighth grade. “I kept the skirt,” she told the Detroit Metro Times. She was also a wrestler, and that dichotomy shows up in “Scream” which features classic Detroit muscle as well as chirpy exuberance.

She moved to Detroit in 2009 and told Rolling Stone, “I feel like it’s not like it was. There was a golden era with the garage-rock stuff and Jack White and the White Stripes but…do I relate to the current scene? There’s definitely a scene that I’ve played music in for a long time. So I do relate to that.”

Chura’s new Saddle Creek album was produced by Car Seat Headrest’s Will Toledo, who came to Detroit and recorded at Tempermill Studios.