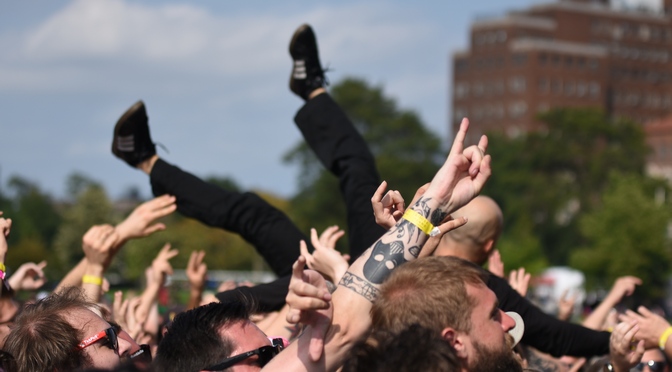 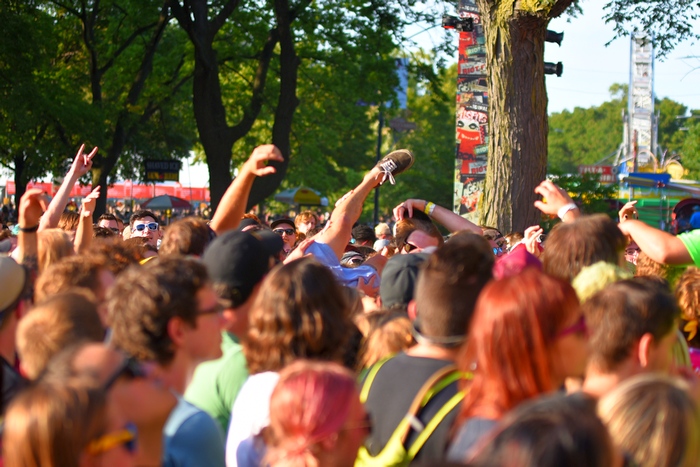 Everybody who has ever attended a multi-day music festival has griped about the same two things: scheduling conflicts and lousy headliners. Whatever. This year almost all the bands I really wanted to see were playing on Sunday, which left a lot of open time to wander around on Friday and Saturday.

A pleasant surprise on Friday included Cock Sparrer who google tells me was formed in 1972 in London and is one of the most influential punk rock bands of all time. I had never heard of them, but they were awesome. The thing I love about those early British punks is that their songs are just classic, catchy pop songs played really fast.

We had to do some running around but managed to catch bits of overlapping sets from the always reliable Descendents, Flaming Lips, and Rancid. I hadn’t seen Rancid since a 1996 show at the Eastown Works where the adults in the bar were separated from the kids on the floor with chicken wire. This may not have quite lived up to that experience, but it was still a pleasure.

Saturday was centered around the titans of thrash: Testament, Anthrax, and Slayer. (Too bad they couldn’t also book Megadeth but Dave Mustaine has throat cancer.) I was standing at the back of the field for Testament and when they did that double kick drum thing they do I could feel it in my chest; photographers in the pit told me they could hardly breathe. Pummeling!

Back when I was a kid, the divide between metal and punk was uncrossable. I remember a metal kid in my freshman year of high school saying, “Punk is for people who can’t play their instruments.” My friend Alex, a senior and the most punk rock kid in school, retorted, “Metal is for people who can’t write lyrics.” East is East, and West is West, and never the twain shall meet. Till thrash came along anyway.

After the unrelenting heaviness of Saturday, it was pleasant to walk in to Day 3 to hear the acoustic strumming of Nick Lowe. He’s a fine craftsman of a songwriter.

The Village People were a hoot to see in person. 2019 is the fortieth anniversary of the notorious Disco Demolition Night in Chicago, an event that revealed the violent ugliness of rockism. So it was a subversive move for Riot Fest to book a disco band at an event that celebrates what some consider the ugliest genres of rock. In high school, a smartass told me that “punk was invented so ugly kids can have fun too.” But these days even the crustiest old punk isn’t too cool to enjoy watching a bunch of macho men getting down.

Even though I just saw them open up for the Hold Steady a couple weeks ago, or maybe because of that, the band I was most excited to see was Sincere Engineer. I don’t watch a lot of complete sets at fests, because I get antsy and have fear of missing out, but I stuck around for this one. The best part about seeing a band with only one album is that you’re pretty much guaranteed to hear all your favorite songs. Chicago’s own Deanna Belos is a great songwriter who explores the themes of being young and bored and hungover and exhausted. Sample lyric: “I had a corn dog / I fell asleep / I feel weird now / I had a bad dream about you and me.” And yes, fans were indeed pumping corn dogs in the crowd, because…well, Chicago, festival, corn dogs, it’s what we do.

The other complete set I watched was Patti Smith. I had never seen her before and now I’m kicking myself. I don’t know what I was expecting but holy shit, she was so good. I guess maybe I was expecting some intense poetry reading with Lenny Kaye noodling moodily behind her, and there was a little of that, but mostly it was Patti fucking Smith showing everybody who’s boss. I thought she’d be super serious but she’s adorable and funny and joyful. I want her to adopt me and be my kid’s grandma. But she’s got her own kids and one of them, Jackson, was playing guitar in her band. She played “Because the Night” for his dad, Fred “Sonic” Smith of the MC5 who died in 1994.

I still can’t stop thinking about how great her set was, and I am so thankful to Riot Fest for giving me the opportunity to see her. What a dope I’ve been for not paying attention to her all these years. She’s been touring nonstop since the 90s so I have no excuse except that I am an idiot.

A three-day music festival will leave anybody exhausted, and the older I get, the more it takes out of me. But there are moments that are rejuvenating, and it’s these moments — especially the unexpected ones — that keep me coming back.

All photos by Jolie Brown for Glorious Noise.

We also shot a ton of other bands this year including Avail, Cock Sparrer, Damned Things, Descendents, Get Up Kids, Guided by Voices, H20, Hot Mulligan, Hot Snakes, Less Than Jake, Lucero, Microwave, Pennywise, Rancid, Ride, Slayer, Teenage Bottlerocket, Violent Femmes, and Wu-Tang Clan. We’ll be posting these to Instagram over the next several weeks. So follow us there.