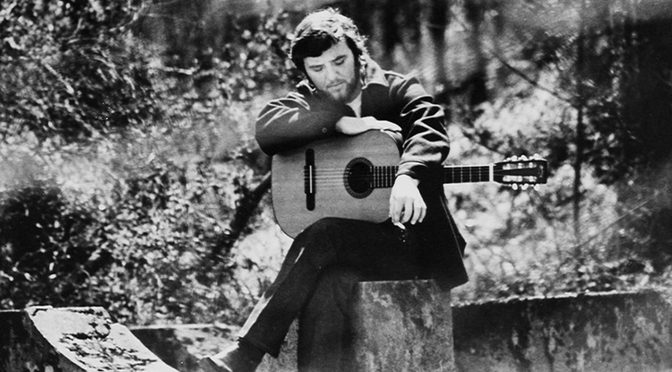 So every couple of years I like to re-read the 2012 Texas Monthly feature (“That ’70s Show”) on the 1972 Austin music scene that birthed the outlaw country movement. If you haven’t read it yet, just stop now and go read it and come back after you’re done.

Every time I read this fantastic oral history I pick up on new artists that for whatever reason I’ve overlooked before. The first time I read it I went out and tracked down a copy of Willis Alan Ramsey’s album. It’s amazing. This most recent time inspired me to look into the work of Mickey Newbury, which is kind of funny since he’s not even mentioned in the article. You know how it goes: you start googling around and one thing leads to another and all of a sudden you’re obsessed with something you’d never even thought about before.

It’s weird, though, that I’d never come across Mickey Newbury. “Luckenbach, Texas” is one of my all-time favorite songs and he’s namechecked in it: “Between Hank Williams’ pain songs and Newbury’s train songs…” How is it that I’d never bothered to look it up before? I’ve been listening to that song all my life — I still have my dad’s copy of Ol’ Waylon. I’m a music nerd; I feel compelled to uncover every reference and backstory of every song I love. Back in college I figured out who the “Jerry Jeff” from Willie’s chorus was and picked up a wild live two-record set that features the drunkest version of “Up Against the Wall, Redneck” ever recorded. But Newbury escaped me.

Newbury was pals with Townes Van Zandt and wrote “Just Dropped In (To See What Condition My Condition Was In)” and arranged “An American Trilogy.” These are songs I have known and loved for decades yet I never looked into their composer. All the best songwriters have proclaimed their love of Mickey Newbury (Kris Kristofferson said, “I learned more about songwriting from him than any other writer”), and in 2011 Drag City reissued his most highly regarded three albums plus a disc of rarities in a fancy box set featuring liner notes written by Ben Fong-Torres, Chris Campion, Kenny Rogers, Kristofferson, and Will Oldham. It’s available on streaming services…minus the liner notes, of course.

So anyway, I made a mix. 21 songs, 69 minutes long, one song per artist, sequenced to maximize listenability but it’s loosely chronological. It tells the story of what happened when country songwriters, mostly in Texas, stopped caring about Nashville conventions and started to embrace the hippies. The bulk of these songs are from 1972 and 73. Tom T. Hall joked about the “illusion of literacy” this new type of songwriting brought to the country music scene.

Buckle up as we take you from the sublime to the ridiculous (and back and forth again) across this sad and beautiful country where someone’s always doing something dirty that decent folks can frown on.

Praise the lord and pass the mescaline!

One thought on “Listen: Cosmic Cowboys, Longhaired Rednecks and Other Troublemakers”