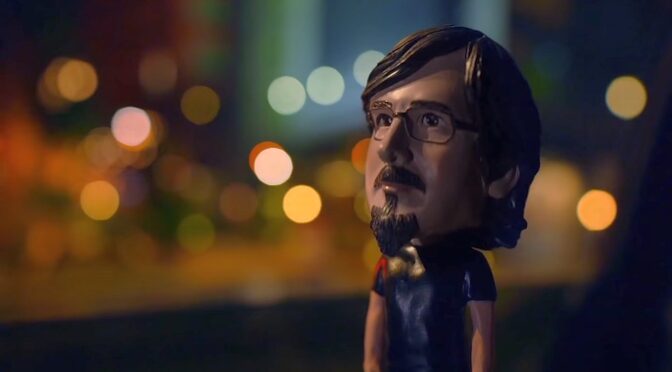 Video: the Mountain Goats – “Get Famous”

Directed by David Hollander. From Getting Into Knives, due October 23 on Merge.

I love the Mountain Goats. There were a few weeks this spring when Songs for Pierre Chuvin very likely kept me from losing my marbles. Everybody I know has struggled with the anxiety, anger, and depression that this pandemic has caused. We all deal with our emotions in different ways. I listened to the Mountain Goats and fired up my chainsaw (don’t ask).

But before John Darnielle recorded that lifesaving effort on his Panasonic boombox at home, alone, in lockdown, his band had already wrapped up recording a new album in Memphis, with special guests like guitarist Chris Boerner from Hiss Golden Messenger who plays on this new single, as does legendary organist Charles Hodges.

The belief that you’re destined to become famous is a weirdly American thing, and this song picks up on some of that desperation, and hints at some of the dangers. Or does it? Darnielle doesn’t typically dabble in sarcasm and it’s easy to hear this celebratory jam as affirming that little Kardashian on your shoulder, encouraging you to go ahead and post that selfie.

The bobbleheaded video comes across as super earnest as well. How can you not root for these nodding little guys? I sincerely want them to be famous!

David Hollander and I met last year and I saw a fellow traveller in him — a guy who likes to get an idea and wrestle with it until something weird and cool happens. I played him the demo of “Get Famous” last July and he picked it up immediately — this would have been within a week or so of writing it, which is kind of a special time in a song’s life — and I knew I’d want him on board to express some of the dread that lurks underneath its mid-tempo Mott the Hoople-inspired jaunt. I wasn’t sure if bobbleheads could really capture that level of giddy anxiety, but David’s visions play for keeps — the first time I saw the camera resolve on my bobblehead in a way that made it look like it had changed its expression, I almost fell out of my chair. Proud to have a video this left-field for our dark little song.

So I dunno. I guess it can be read as dark. But it sure sounds fun!

(Also, the fact that the Jon Wurster bobblehead looks like Jesus is some righteous #rocknrollweirdness.)