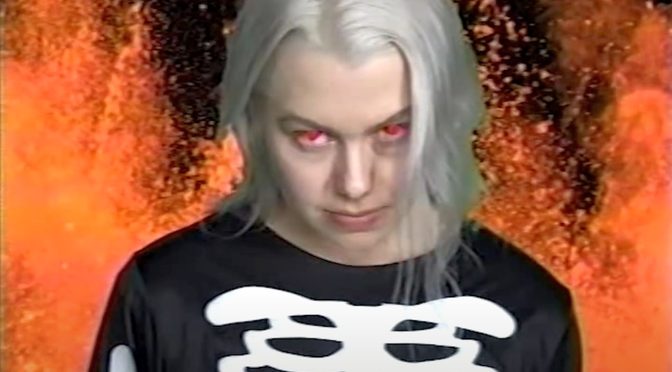 Directed by Nina Ljeti. From Punisher, out June 19 on Dead Oceans.

It’s got to be so hard being a musician right now with no way to tour to make any money. How do you even promote an upcoming release if you can’t assemble a crew and make a video?

Well, as we’re seeing, artists are getting creative and doing it themselves, working from home like the rest of us.

In Phoebe Bridgers’ new video, she gallivants around Japan without leaving the comfort of her jammies. Dead Oceans says the original plan was to shoot the video on location, but who needs that hassle when you’ve got a green screen and some old Godzilla footage? Plus, you know, the whole global pandemic situation…

The only evidence of potential social distancing violations is a little hiccup with the person holding the fan who accidentally gets into the shot. They’re fired!

Day off in Kyoto, got bored at the temple
Looked around at the 7-11.
The band took the speed train, went to the arcade
I wanted to go but I didn’t.

Bridgers says, “This song is about impostor syndrome. About being in Japan for the first time, somewhere I’ve always wanted to go, and playing my music to people who want to hear it, feeling like I’m living someone else’s life. I dissociate when bad things happen to me, but also when good things happen. It can feel like I’m performing what I think I’m supposed to be like. I wrote this one as a ballad first, but at that point I was so sick of recording slow songs, it turned into this.”

We love your ballads, Phoebe Bridgers, but this is good too!