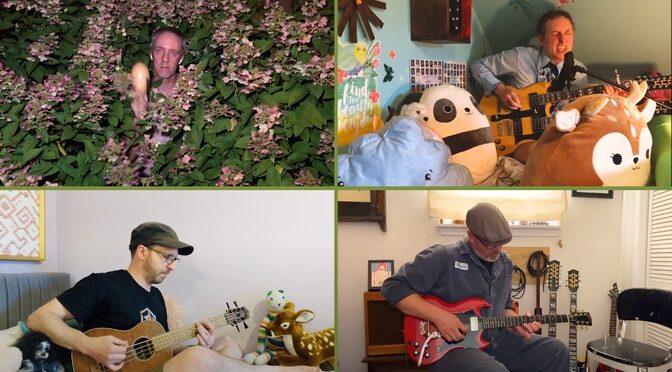 What are you supposed to do when you can’t hang out with your pals in real life anymore? Well, one thing you could do is take over your daughter’s bedroom and zoom your pals. Or take off your clothes and hide in some bushes. Whatever. The choices are endless, really, if you use your imagination.

I miss my friends in Chicago so much. This is the longest I’ve gone without at least visiting Chicago since I was a kid. Maybe ever. My folks had friends there who we would visit at least once a year. It’s where I learned to not take shit from bullies. (I’m looking at you, Randy.) I spent my twenties crashing on couches and inflatable mattresses in people’s studio apartments. Finally moved there right before my 30th birthday and spent my thirties there: Lincoln Square, Lakeview, Albany Park, back to Lincoln Square. Made so many great friends, including the Quasars. We had so much fun. Always a band playing a club somewhere. Big Horse, Gunther Murphy’s, Martyrs’, Beat Kitchen, Lily’s. Oh Lily’s, what a glorious shithole. That big shoe. Weird, hidden rooms upstairs where people could do bad things. Five-dollar Long Island iced teas. Bloody Mary’s made with human placenta. So many good times.

Now we’re all so damn old I can hardly believe it. But hey, at least these four guys still look good. And they’re still able to conjure up the mojo that inspired us to start a record label to release their album.

And maybe the lyrics are as applicable to today as they were back in the day.

They’re handing trophies out to all young things
Who can distract their country for the King,
And keep the vultures occupied…

Go out and earn some trophies, everybody!