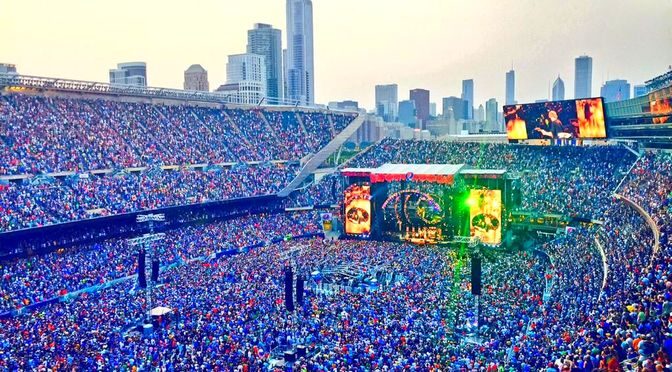 Unless you are a participant, for viewers/listeners/attendees of live events, music and sports are both forms of entertainment, which have many similarities from the point of view of the attendee. They are (and this is in the context of pre-C-19) held in large structures and there are plenty of people also in attendance. There is a multitude of things that you can buy, from overpriced beer (as you’re prohibited from bringing in your own beverages, this is not a price predicted by market forces but by the venue owner or event organizer) to hats, T-shirts and other paraphernalia. Sporting events tend to last longer than concerts (with the average football game taking 3 hours and 12 minutes, for example), unless Bruce Springsteen is involved.

One fairly notable difference is that sporting events start on time, largely because of TV contracts. (This also explains, in part, why the NFL game is as long as it is: the game consists of four 15-minute quarters; halftime is 12 minutes for a regular game, although for the Super Bowl it can run 30 minutes or so.) How many times have you been to a concert when it started within 30 minutes or so of the time on your ticket?

And speaking of tickets, it has been reported that Ticketmaster is considering a plan for concertgoers where by attendees would have to verify that they’ve either tested negative for C-19 within a period of 24 to 72 hours before the show or, whenever this happens, have been inoculated. All of this is smartphone based (e.g., you get a test; tell the lab to send the information to a third party like CLEAR; the third party provides the OK for attendance). A benefit for Ticketmaster is that because this also means that a given ticket is digital, there is no reselling outside of its approved method.

If you’ll accept the argument that there are similarities between things like professional football games and concerts, then there is the very real potential that there will be a profound change vis-à-vis live events.

That is, according to a survey conducted by Morning Consult on live sports viewing habits (as in watching things on a screen) of all adults, Millennials and Gen Zers, the latter cohort is not nearly as keen as the Millennials. That is, whereas 50% of Millennials watch sports at least weekly, the figure is just 24% for Gen Z. And while only 20% of Millennials never watch sports, 39% of those in Gen Z never do.

While there isn’t an exact analogue for watching live music in a way that there are seemingly endless sporting events being shown on commercial and cable television networks, it could be relevant to look at the way people in general are consuming music. According to the RIAA, in 2019, 79% of recorded music revenues came from streaming. Only 10% came from physical media, although interestingly enough, physical media sales were greater than digital downloads, at 8%. Physical media, as in vinyl records, have had sales increases 14 years in a row, hitting $504-million in 2019—but that represents just 4.5% of total revenues, so it is not like there is a massive swing toward the physical.

Which leads me to wonder this: Is it possible that given the $96.17 average price of a concert ticket, given the evident disinterest among Gen Z in
watching live sporting events and the increase in vinyl but still to but a comparatively low level, large concerts may become a thing of the past?

While we may think that concerts have long existed, according to the Victoria & Albert Museum, which describes itself as “The world’s leading museum of art and design,” so presumably it knows a little something about the musical arts, “Public concerts were first established in London during the 1670s. John Banister, a former violinist at the court of Charles II, set up a concert room in 1672 in his own house in White Friars, an area to the south of Fleet Street. In 1678, a group of professional musicians known as the Music Meeting opened a concert room near Charing Cross, where Henry Purcell performed, and by about 1700, a number of music societies were performing in taverns.”

Music concerts began in comparatively small venues. Over time things grew to the massive stadia that has (until now) become the norm for many acts. That is, in 2019 the top five highest-grossing tours were: P!nk at $215.2-million; Elton John, $212-million; Ed Sheeran, $221.7-million; Metallica, $179-million; the Rolling Stones, $177.8-million. Which is to say that these acts are unlikely to come to a small stage near you anytime soon. Or any time.

But maybe a non-trivial percentage of Gen Z is going to be disinterested in the hassle of attending concerts large or small, even after there is a vaccine and reopening. And presumably the older cohort of concert goers (I have a hard time believing that Elton, Metallica and the Stones are drawing a younger demographic) are simply going to be too mortality-conscious and so are going to stop going.

So where does that leave the concert business?

Perhaps looking for a new model.