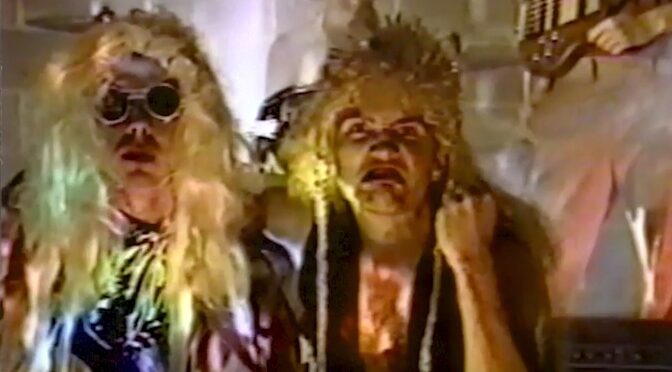 Single out now on Mordorlorff Music.

Years before the Darkness, Steel Panther, Dethklok, even before Tenacious D, a group of teenagers in suburban Detroit decided they needed to live out their rock and roll fantasies and start a band. And not just a band. But an experience!

The Lovely Ladz unashamedly turned it up to eleven.

They had bad wigs, dumb props, lots of beer, and enough chops to pull it off. Pretty much.

I am fortunate to have experienced the Ladz once in a basement at Michigan State University around the time this previously unreleased single was recorded. They were ridiculous but impossible to ignore (it was a small basement). They were goofing on “hair metal” but their songs were as good as anything by Poison or Skid Row if not better. They were definitely funnier.

They never released anything back in the day. In fact, “Nasty Blister” is the only song the Lovely Ladz ever recorded. Captured in 1993 in Saginaw, Michigan, with engineer Dan Palmer who had been in a band called Bungee Deth Fest with Ladz drummer Stylez (secret identity: Matt Favazza), they recently found the original master tapes. Mickey Trixxx (a/k/a Dan “The Fox” Edwards) finally mixed and mastered them for this release, revealing their tender side: “Nasty blister on my private part / Nasty blister on my blackened heart…” 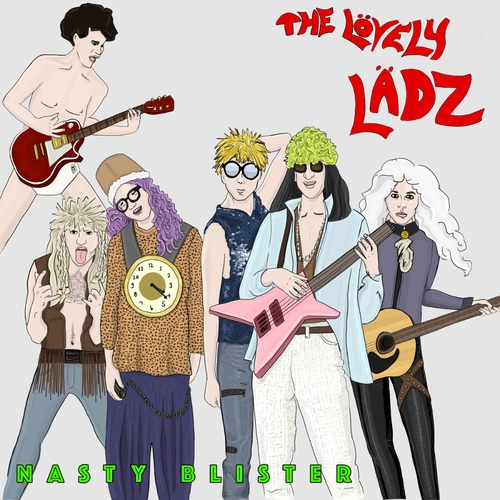 The video features vintage footage of the Ladz terrorizing a local mall combined with them rocking out in their rehearsal space. Watching it feels like going back in time to when nobody had any worries at all.

But the flip side to that is remembering how uptight we all were back then. In the early 90s everybody was too cool to admit they sincerely liked anything. All emotions were draped in irony and sarcasm. We got loaded and danced to the “Wonder Woman” theme song but wouldn’t admit we actually liked disco. Local bands wrote and performed elaborate rock operas. But we all pretended we were aloof.

I remember years later, after we became friends, talking to Dan in Chicago, and I made some snotty, dismissive comment about hair bands. He looked at me like I had stepped on a frog and pointed out that what “cool people” call “hair metal” is really just rock and roll; it’s what hard rock evolved into during the 80s.

“Don’t you like rock music?” Of course I do!

That conversation changed my attitude about that style of music. Since then, I haven’t been so quick to scoff. Sure, there’s plenty of silliness. And there are some truly terrible, awful songs. But that’s certainly not unique to hair metal.

So where does that leave the Lovely Ladz? Were they just a Spinal Tap-inspired joke taken as far as humanly possible by a group of no-budget kids? Or were they talented musicians playing stuff they loved from a humorous angle? Yes and yes. They’re funny, and they’re good.

Footnote: A few years later, four-fifths of the Ladz would move to Chicago and get serious with a great new power-pop band, the Krinkles. They had it all (except enough fans) for a couple glorious years before fizzling out for the typical reasons bands split up. They were amazing while it lasted though.

One thought on “The Lovely Ladz video premiere: Nasty Blister”