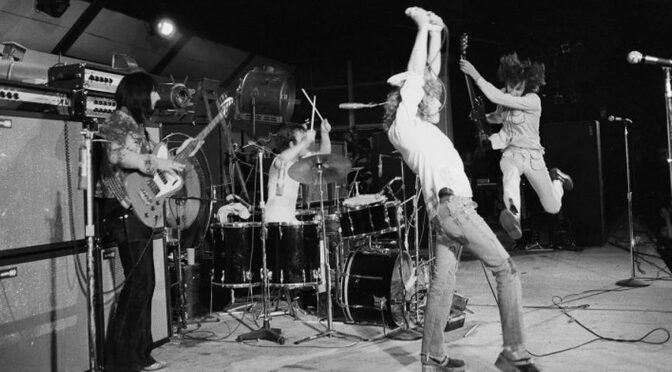 The deal, such as it is, was on offer from Wolfgang’s, the seemingly endless archive of the late concert promoter Bill Graham, who’d established The Fillmore. He’d had his crew record shows that occurred at that venue, and in the years since his death in a helicopter crash in 1991—he’d been attending a Huey Lewis and the News concert at the Concord Pavilion, where he’d been discussing the possibility of staging a benefit concert for the victims of the Oakland hills firestorm (and here we are, all those years later, and the area just north where he died is on fire)—the archive has grown with recordings for an array of other venues as well as all manner of original and replicated memorabilia.

Those who get that picture of The Who get a free year of Wolfgang’s Music, a streaming service that includes more than 20,000. And for those who are buying, say, other pictures of The Who or lots of other performers, or posters or swag of various manifestations, there’s free shipping. Which, for people who are interested in music of that era, in particular, isn’t a bad deal: a year-long Spotify premium subscription is $109.98 (another bizarre price: it is $9.99 per month but you get the first month free; the subsequent year, presumably, would be $119.88; while marketing mavens note that people are more inclined to buy things that don’t have a price like, say, $10 per month, I suspect that was more of a reality when people were looking at actual stickers on objects; now it strikes me as silly).

But I feel compelled to wrap this back around to where we are now, still in the midst of the pandemic, when concerts are in parking lots of drive-ins or simply on line or in venues that allow social distancing, when there are about 1,000 people dying per day, when there are those fires raging on the west coast, and when people in the southeast are recovering from the flooding caused by a hurricane. Just a normal time in the Age of Disnormalcy.

The list of performers “from the last 70 years” on Wolfgang’s starts at Aerosmith and ends at Wilco “and 10,000+ more.” An incredible lineup by any metric, one that seems wholly comprehensive regardless of one’s particular taste in modern music.

Is it better to sit and stream a concert from an archive than buying a ticket to a virtual concert that is being performed live by an actual musician or group, rather than one who is actually gone (e.g., Warren Zevon) or functionally non-existent (e.g., Steely Dan: there is no band without Becker)?

With the economic situation being as precarious as it is, there need to be decisions made.

Do you get that print for free?