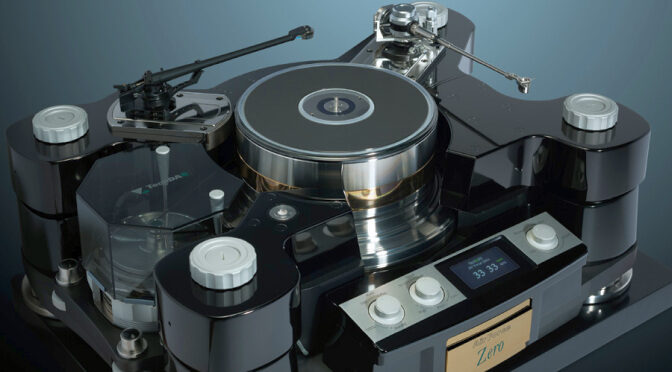 Last week I had the opportunity to drive a 2022 Honda Civic. It was the top-of-the-line Touring trim. It is an all-new, 11th generation Civic. It has leather seats, Bose audio with 12-speakers, Apple CarPlay and Android Auto, an array of sensors for safety, moonroof, 180-hp turbocharged engine. . . and a lot more stuff.

It is really an impressive vehicle, and being a Honda Civic, I would imagine that whoever buys one is likely to have it for some years in reliable operation. A value play.

This morning I read piece by Jacob Heilbrunn in The Absolute Sound about his quest for getting a custom reference stand for his turntable. He contacted the chief engineer at a Buffalo, New York-based company, Harmonic Resolution Systems, about getting the company’s VXR stand. As things went, Heilbrunn obtained a custom VXR Zero stand.

I suspected that I was missing something.

So I looked at the turntable that Heilbrunn needed this very specific stand to accommodate.

According to Hideaki Nishikawa, who designed the reference turntable, “The goal of the project was to develop a truly groundbreaking product, building on our expertise and knowledge and incorporating new ideas and insights. To achieve this goal, the project had to be cost-no-object. And it had to have whatever technologies would be best suited for sonic performance, no matter how much it would cost.”

According to a recent review in Stereophile, the TechDAS Air Force Zero has a base price (i.e., there are models above it in the TechDAS lineup) of $450,000.

While someone might argue that bringing the Civic into this rarefied air is completely out of the question, that I should be citing something like a Porsche 911 or a Bentley Continental or, going completely beyond the pale, a Bugatti Chiron ($2.9-million, if you have to ask), it does strike me that the Civic is a car that pretty much has all of the amenities and then some that anyone would ever want or need (OK, maybe it doesn’t have AWD and you live in the snow belt or maybe you want more room for your gear than its trunk can accommodate), but how bizarre is it that we live in a world where you could buy 17 Civics for the price of a custom stand and a turntable and still have money left over for gas?

But in some ways: How wonderful is it that there are people who want to create and other people who want to own equipment that is less expensive than a Chiron (Bugatti will build a total of 500) but far beyond the resources of those who think about Civics?

(This is not an argument on behalf of conspicuous consumption, rather than to observe that there are those who are so keen on their endeavors that they will commit resources to them which seems far beyond the pale of most of us. Just as there are tuners who have taken previous generations of Civics and socked in more than that $28K over time, which may strike the person who buys the stock version as absolutely bizarre, that commitment is worthy of celebration for those who can—and do.)

Which leads me to good news for people who own turntables.

The “Mid-Year 2021 RIAA Revenue Statistics” were released by the Recording Industry Association of America, and it includes:

“Vinyl records continued a remarkable resurgence in the first half of 2021. Revenues from vinyl albums grew 94% to $467 million, though the comparison versus the prior year includes a period in which retail stores were significantly impacted by Covid-19, and Record Store Day 2020 was delayed and did not occur in the spring (as it did in 2021). Revenues from CDs increased 44% to $205 million, but still remain 19% lower than they were in 1H 2019. CDs only accounted for 30% of physical revenues, while vinyl accounted for more than 2/3 of physical format revenues.”

Not good news for owners of Discmans, but great news for the vinyl audiophiles, because if people will buy, companies will press.

While physical formats account for 10% of the revenue pie in 1H 2021, streaming accounts for 84%, with paid subscriptions totaling $4.6-billion. Which doesn’t look so good for that $467 million, but a buck is a buck.

One interesting aspect of the non-physical formats is that the RIAA calculated that permanent downloads are on the wane: “In 1H 2021, revenues from digital downloads fell 6% by value to $319 million, accounting for 5% of total revenues.” Which makes that $467 million look a whole lot better.

This is somewhat curious. More people would rather not own music but simply have access to music. Yet there is a small but growing number of people—or a small-but-spending-more same number of people (e.g., I suspect Mr. Heilbrunn is spending more on discs than any 10 people you know)—who are finding that there is some benefit to be realized by having the music contained on a physical artifact, even if they listen to that music through the kind of knocked-together setup that could be found in a dorm at a midwestern college in the late 1970s or something that would make SpaceX engineers go wide-eyed.

Maybe this analogy is closer and more telling than a Honda Civic vs. the stand for a turntable.
Remember when digital books were going to make physical books go away, when Amazon would be able to make more money by not having to drop off a physical object at your address because the Kindle was all the more convenient for you (and profitable for it)?

According to the most recent data from the Association of American Publishers, e-books account for. . .13.7% of total trade sales. Audio books are not far behind, at 10.1%. But physical books, hardcovers and paperbacks, are at 67.1% of the market.

This is not to suggest for a moment that there is going to be a sudden ground well in demand for vinyl (vinyl sales are less than 10% of streaming).

But it is interesting to know that there are things like the TechDAS Air Force Zero in the world, things that are tangible and bring joy, as physicality seems to becoming too much of a burden for people.