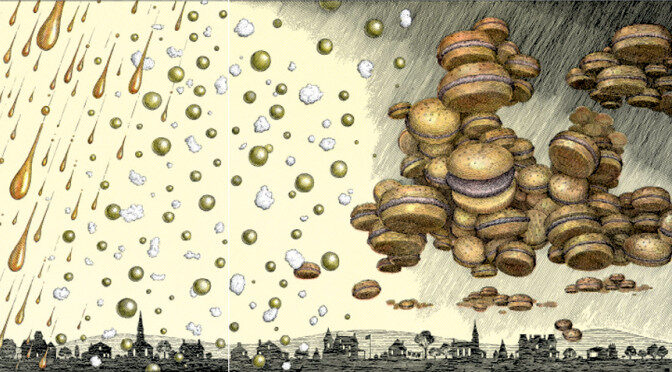 The thing about predictions is that if they’re right no one really notices.

Consider: You are planning a day in the park. The goofy guy on the local TV news says that the weather will be “partly sunny.”

So you go to the park.

You’re pissed and mutter some things about that weathercaster’s mother.

It is fully sunny.

You don’t even remember the weather prediction.

There have been a number of predictions made that were never realized in history.

In 2007, when he was running Microsoft, Steve Ballmer said there was “no chance” that the iPhone would gain any market share. There is the distinct possibility that you are reading this on an iPhone.

John Philip Sousa, the composer of the rousing marches, thought that recorded music would proliferate in people’s homes (true) but with the consequence that no one would want to learn the art and craft of creating music (false).

Then there is Dick Rowe, who worked for Decca Records in London, who told Brian Epstein in 1962, “The Beatles have no future in show business.”

Ted Gioia is, according to tedgioia.com, “a musician and author, and has published eleven non-fiction books. . . . His books have been translated into Spanish, Italian, German, Greek, Turkish, Korean, Chinese, and Japanese. Gioia’s wide-ranging activities as a critic, historian, performer, educator and YouTube presenter have established him as a leading global guide to music past, present and future.”

And on the subject of the future, Mr. Gioia has written a piece on his Substack site, “12 Predictions for the Future of Music,” which includes a preemptive warning: “If you earn your living from music, some of these changes might come as a shock.”

Some are provocative. But if you’re able to generate income in the music industry such that you can “earn a living,” odds are (1) these predictions won’t be particularly surprising and (2) you probably have the skillset that would permit you to do practically anything for a living, from bomb disposal to swimming with the sharks.

So let’s walk through the predictions:

1. Mr. Gioia posits that record labels won’t bother with the time, effort and money required to develop new talent and will simply milk the old catalogs. Given all of the money being spent on buying up the rights to old tunes, this seems not particularly shocking.

2. A number of new artists will get their breaks on thinks like TikTok. (Umm. . .isn’t this occuring right now?) What’s more, Gioia suggests, there may be a new platform for music developed during the next decade, “an interface that makes it fun and exciting for music fans to hear new music.” Might this not be part of Zuckerberg’s “metaverse”?

3. This one is interesting in a strange way: “listeners will have favorite new songs, but not know (or care) about the name of the artist.” Presumably this is a consequence of streaming. Back when people would go to those places called “record stores” and flip through the stacks, they’d know the name of the artist that made the song they liked, such that they would look for those plastic-wrapped squares of colorful cardboard that would contain more work by said artists.

4. He predicts “Musician incomes will continue to shrink” (yawn) and that the bigger potential will come from branding and merch and the like.

5. Here’s one that has some resonance as I write this the week before Halloween: “Dead musicians will start showing up everywhere.”

6. Which segues to this one: “Dead musicians will start by giving tours in concert halls.” Presumably he means that they will go on tour in concert halls, not direct people to their seats or the bathrooms, although that might be a more interesting use of the holographic technology.

7. Gioia thinks that there will be new music trends coming from places that aren’t “major Anglo-American urban centers.” As in “A-Pop from Africa, I-Pop from India or Indonesia,” etc. To put this into context, realize that in 1989 WOMAD (World of Music Arts and Dance) and Peter Gabriel founded Real World Records, the objective of which is “to provide talented artists from around the world with access to state-of-the-art recording facilities and audiences beyond their geographic region.” That’s 32 years ago. How many discs do you own from the Real World Records label?

8. This prediction goes back to the first prediction, but narrows it down to the Anglo-American world, where the big deals will be “acquisition of old songs, especially publishing rights.” This isn’t a prediction because it is happening right now.

9. This one is actually a two-fer: (1) official stats will show that the music business is growing, but as Benjamin Disraeli (he who influenced the gears) once said, “There are lies, damn lies and statistics”; (2) the tech companies that will generate income from music won’t reinvest it in music.

10. Music tech innovations will come from “Silicon Valley and its offshoots.” Well, you can’t depend on dead musicians to do it.

11. “Most people working in the music business will be poorly paid, with few opportunities for advancement.” The future? Or now?

12. Music execs will work to get out of the music business. Not a big surprise, given much of the foregoing.

On another, but slightly related, subject. . .

You may have heard of the massive initiative undertaken by the International Consortium of Investigative Journalists (ICIJ) that is named the “Pandora Papers.”

According to the ICIJ, “Based upon the most expansive leak of tax haven files in history, the investigation reveals the secret deals and hidden assets of more than 330 politicians and high-level public officials in more than 90 countries and territories, including 35 country leaders. Ambassadors, mayors and ministers, presidential advisers, generals and a central bank governor appear in the files.”

And do you know who else is found within the 11.9-million financial records?

Given Ted Gioia’s predictions about the financial aspects of the music industry going forward, perhaps whatever it is that the three did can simply be described as “prudent.”

*As you may know, that is the title of a “family” movie released in 2009 which I have never seen but think carries one of the all-time best titles. I mean, Cloudy with a Chance of Meatballs or Gone with the Wind? Not even close. (Almost as good is the title of another family adventure comedy that was released in 2008—again, I’ve not seen it—The Pirates Who Don’t Do Anything: A Veggie Tales Movie. If you drop the part after the colon, it sounds like something that could have been written by an adventurous Samuel Beckett.)