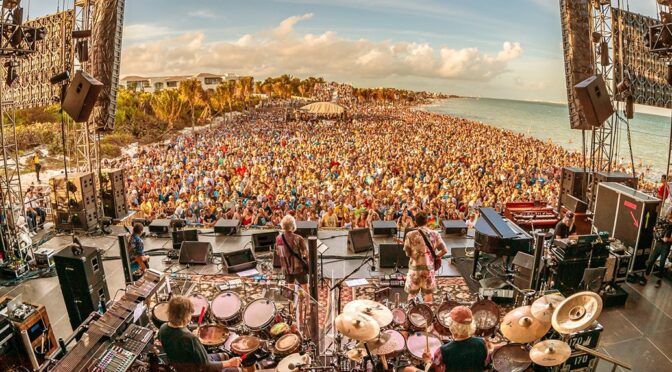 According to the description of Cancun on TripAdvisor:

“The international capital of spring break

“‘Spring break forever’ could be Cancun’s motto. It’s all sun, sand, and good vibes. Here flip flops and board shorts count as “dressed,” and the club beats are thumping 24/7. Swim-up bars keep the cocktails coming to the twentysomething crowd. But families can find their own paradise at one of the many resorts with kids’ clubs and gigantic pools.”

So what do we have:

• Spring break. Which could include those ages 18 to 24, from high school seniors through undergraduates
• Twentysomething crowd that are partial to swim-up bars
• Families

Which makes me wonder about the potential crowd for “Playing in the Sand,” the three-day event that will feature Dead & Company.

Two points: (1) the name of the “destination concert experience” will be held in Cancun next January, a period when there isn’t a spring break; (2) the name of the event is a play on the title of a Grateful Dead tune that was released in 1971, making it 50 years old, which means that it was out 21 years before the oldest twentysomething was born.

The packages aren’t inexpensive. They start at $2,112.50 per person (yes, this includes a room at the Moon Palace Cancun Resort) and go up to $9,000. Starting prices.

Presumably, given that most people haven’t been vacationing much (except for thousands of springbreakers this year) due to COVID, by next January they’ll be ready for an event at a resort.

But one thing strikes me as a bit odd about this, and not that the Grateful Dead was a band that is more associated with grilled cheese sandwiches and drum circles than fine dining and a Jack Nicklaus golf course.

One of the FAQs is: “Can I Pay For This Package Using Multiple Credit Cards?”

Isn’t that sort of a red flag? Or maybe someone who is in that financial position is a vintage Deadhead and is to be admired.

(By the way: the answer is No. Cards can be changed, but when you pay you pay, although a payment plan is offered. Oh, and it is non-refundable, so trip insurance might be a good thing to think about. And I don’t mean Ken Kesey-style trip insurance. Yes, it has been a long time since The Electric Kool-Aid Acid Test.)

While on the subject of Mexico, it is worth noting that Latin America is the fastest-growing region in the world when it comes to recorded music revenues, according to the IFPI. The growth there was 15.9%. In the U.S. and Canada (might as well have a region-to-region comparison) was less than half that, at 7.4%.

This according to the IFPI “Global Music Report” for 2020.

Interestingly, 7.4% is the amount of global growth in recorded music. This is the sixth year running there has been growth. In 2020 the total revenues were $21.6-billion (USD).

Not in the least bit surprising is that the money was largely generated by streaming. The IFPI reports that at the end of 2020 there were 443-million people who were paying for a streaming service. Add in the advertising-supported services and the revenues from both channels was $13.4-billion, or 62.1% of the total take.

And while on the subject of “Playing in the Sand,” a live event, the IFPI found that performance rights revenues fell 10.1%–because there weren’t a whole lot of live performances in 2020.

Which brings me to one of the more bizarre things that is happening in the music industry at the moment.

There is an organization of songwriters that have established the-pact.org, which is meant to prevent them from what can be described as “predatory artists.”

Apparently there are some singers out there who are insistent that they receive a songwriting credit for songs they had no participation in writing.

The songwriters write that they “are fully aware of the importance of the artist who goes on to perform and promote the songs we write.” You can imagine a songwriter playing a composition for a fullofthemselves “Artist” and then having said vocally or instrumentally gifted (probably more the former than latter) individual demanding a writing credit or it is a no-go. Said songwriter is put in an awkward place because if the song isn’t recorded, then there is no income coming in.

If that credit is given, then “These artists will go on to collect revenue from touring merchandise, brand partnerships, and many other revenue streams, while the songwriters have only their publishing revenue as a means of income.”

And the “artists” get a slice of that revenue, revenue that they don’t deserve.

This really is a sad state of affairs.

According to glassdoor.com, the average salary for a songwriter in the U.S. is $51,167.