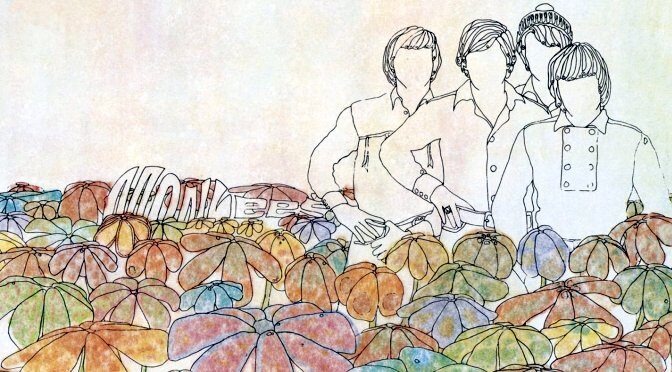 This is odd. To get to the Beatles, my subject, I have to go through the Monkees. This is because as I start this I learn that Mike Nesmith died December 10. He was 78. According to an obit in The Washington Post, “Nesmith just performed less than a month ago, concluding a Monkees farewell tour in Los Angeles with singer and drummer Micky Dolenz, who is now the band’s sole surviving member.” No, he’s the sole surviving member of what was once the band.

Harrison Smith notes in the WaPo obit, “for a time, the ‘Prefab Four were said to have outsold the Beatles.”

And here we go.

The Beatles were referred to as the “Fab Four.” In this case, “Fab” was short for “Fabulous.”

The Monkees “Prefab Four” moniker doesn’t mean “Prefabulous” but “Prefabricated.” The combination of the four was a result of a casting call, as two TV producers in 1965 had the idea for a situation comedy about a band. This resulted in a TV series, The Monkees, which ran on NBC from September 1966 to March 1968, 58 episodes. The storylines were based on the concept of a band in LA trying to make it.

Nesmith showed up at the audition having seen an ad in a trade mag. Tork was recommended by Stephen Stills. Davy Jones was a musical stage performer (who was in the cast of Oliver! that did a performance on The Ed Sullivan Show the night the Beatles performed on the show). Micky Dolenz was a TV actor, having performed as the star of Circus Boy, where he was the orphan of trapeze artists who was adopted by a clown and his extended family and had a baby elephant as a pet—and people think that some of the bits in The Monkees were surreal.

One of the issues that swirled around the “band” was that of the extent to which they were actually making music versus performing music. But realize that (1) they were first and foremost actors in a TV show during that period of ’66 to ‘68 and wouldn’t have existed as a group were it not for the development of that show and (2) back then lip syncing and unplugged guitars in TV performances were status quo. This is not to say they couldn’t play instruments and sing. It is to say that early on studio musicians were instrumental in the Monkees’ music. But when you have a prefab situation, does it really matter?

To the point of how prefabricated things were in the context of musical performance, it is notable that Tork was known for his ability on guitar but was assigned the bass; Nesmith was a bass player but he was the Monkees’ lead guitarist; Jones knew how to play the drums but became the lead singer (whose percussion talents were exhibited on the tambourine and maracas).  And Dolenz, who knew how to play guitar, was put behind the drums. This wasn’t a group of musical polymaths. It was casting. It was about the appearance rather than the reality. The “band” existed in fiction, then it broke through the fourth wall.

As for the “outsold the Beatles,” that is true. In 1967, according to Billboard, The Monkees was the number-one album for the first five weeks of the year, followed by More of the Monkees, which was number-one for 18 weeks, and the best-selling album of the year. It was pushed out of the top spot by Sounds Like. . . from Herb Alpert and the Tijuana Brass on June 17—but the Monkees came back to number one the following week with Headquarters.

Headquarters had one week at the top, being replaced on July 1 with Sgt. Pepper’s Lonely Hearts Club Band. The Beatles’ album, with cuts arguably more, um, eclectic than “I’m a Believer” and “(I’m Not Your) Steppin’ Stone,” was replaced by Ode to Billie Joe by Bobbie Gentry (what was it Billie Joe, who committed suicide, and a young girl were seen throwing off the Tallahatchie Bridge?—a mystery of the ‘60s that was perhaps more perplexing than the lyrics of “Louie Louie”).

Billie Joe was replaced, rightfully I’d suggest, by Diana Ross & the Supremes: Greatest Hits, which is a double-disc set, so all the more surprising that it would be on top for five weeks.

But it was back to the Monkees, whose Pisces, Aquarius, Capricorn & Jones Ltd. became number one on December 2 and finished 1967 on top.

Coincidentally, the first eight weeks of 1968 had Magical Mystery Tour on top; the Monkees didn’t overlap the year.

So with four albums out in 1967 vs. the Beatles’ one, with regular TV exposure back at a time when there were three national broadcast networks (NBC, CBS and ABC) which pretty much meant a concentration of attention among people, the Monkees did best the Beatles.

Although I’ve long contended that a group’s best song is rarely its best-selling song and am therefore skeptical of the argument that sales equate to some sort of musical goodness, let’s go with that sales approach since that seems to be a widely understood metric.

The Monkees wasn’t on the top of the Billboard album list for just five weeks. It was number one for the last eight weeks of 1966. But what else made the list in 1966?

In chronological order, with the number of weeks as number one in parentheses:

(Who knew that Whipped Cream knocked off Rubber Soul?)

And let’s bookend the Monkees’ annus mirabilis with the same sequence for the top albums of 1968:

So what do we see isn’t here? The Monkees. Although the band released two albums in 1968, The Birds, The Bees & The Monkees and Head, neither made it to the top. Novelty is a fickle thing.

There is music. Music that endures. Music that is still remarkable 50 years later. And there is that which had its moment.