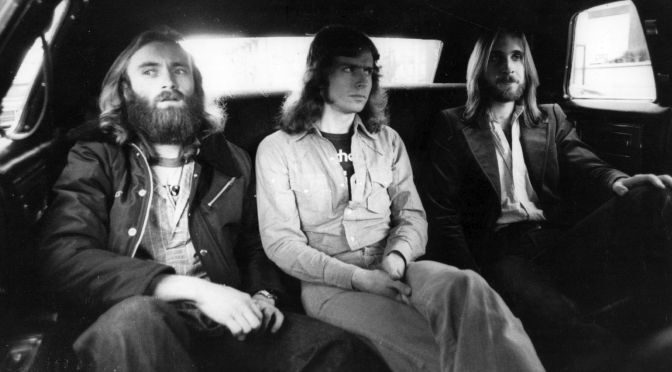 “Did you hear that Genesis is touring?”

A friend called and asked me that. He knew that I’d have little interest in that. But it was good to hear from him, as the pandemic has meant that we’ve not seen one another for many, many months. He is a fan of what he, and presumably Martha Quinn, affectionately refers to as the “Big 80s,” which I suppose is a bit of nostalgia that we could all benefit from nowadays. (Nostalgia for something, not necessarily the 80s.)

“I thought Phil Collins was near dead,” he continued, not making some sort of ageist comment but being completely serious about it.

That led me, later, to a search that took me to British tabloids. As a lede in the Mirror has it in a story published earlier this year: “The master drummer has been plagued by agonising health issues for a decade, starting when he injured a vertebrae in his upper neck while performing in 2009.”

The poor bastard has suffered from all sorts of health-related issues, perhaps the most troubling for a drummer, master of otherwise, is nerve damage to his foot, which was caused by the surgery to fix his neck. This condition is called “foot drop,” which, according to the Mayo Clinic: “If you have foot drop, the front of your foot might drag on the ground when you walk. Foot drop isn’t a disease. Rather, foot drop is a sign of an underlying neurological, muscular or anatomical problem.” Collins was to have performed at the Royal Albert Hall in 2016 yet had to cancel two dates because he had gotten up at night to go to the bathroom while staying in a hotel and took a header due to the foot drop, which led to a brief hospitalization. And you might have imagined that being a rock star is glamorous. Yes, those “agonizing health issues” did lead him to do some serious drinking, which evidently he now has under control.

So while the 70 year old walks with a cane and has had one of his kids fill in for him on drums, he is apparently not “near dead,” because I suspect the tabloids would have been making that point in massive headline type.

Still, it seems as though the man going out on tour is a definition of, dare I say (prepare to groan), “against all odds.” (When is it time to quit?, I wonder.)

A day after my friend called I received an email from Ticketmaster about “The Last Domino?” tour.

The email said, in part, “From VIP dining experiences and cocktail parties, to exclusive merchandise offerings, delights have been prepared that will allow guests to fully immerse themselves in undoubtedly one of the most legendary tours to ever occur.”*

I was also advised, “Ticket prices may fluctuate, based on demand, at any time.” Welcome to dynamic pricing.

The packages (e.g., “‘Tonight, Tonight’ VIP Dinner Package” and “‘I Can’t Dance’ VIP Cocktail Party”) all seem rather mundane. Somehow eating dinner out of steam trays and undoubtedly drinking out of plastic cups at a place where the next night they’ll be playing basketball or hockey isn’t exactly a fine-dining or drinking venue. But presumably with the COVID fatigue and savings that have been accused due to the lack of things like Genesis concerts have left fans of the Big 80s with money that is just dying to be spent.

Which leads me back to the Ticketmaster email which has the following sentence, presumably crafted to entice fans to glom on to one of those packages: “Get closer to the band than you ever thought possible, as each package comes with an amazing ticket to the show.”

The shows start in the U.S. in mid-November. One can only imagine that by then COVID-19 should be under control. Many people vaccinated.

But even so, “Get closer to the band than you ever thought possible”? Are we going to have said “Screw it” to any sort of social distancing in November? Somehow the “get closer” trope is something that doesn’t have the same sort of appeal that it once did. (Although it should be noted that the proximity is the possibility of seating—with that delicious dinner package—in rows 2 through 10.)

As these things happen, the day after receiving the Ticketmaster email I read an essay in The New York Times by Zeynep Tufekci titled “Why Did It Take So Long to Accept the Facts About Covid?” Her basic argument is that the finding, now accepted by the World Health Organization and the Centers for Disease Control, that transmission of the virus by aerosols, small particles, is a primary vector of transmission. Perhaps the primary vector.

Dr. Tufekci writes, “If the importance of aerosol transmission had been accepted early. . . . [i]nstead of blanket rules on gatherings, we would have targeted conditions that can produce super spreading events: people in poorly ventilated indoor spaces, especially if engaged over time in activities that increase aerosol production, like shouting and singing.”

Nowhere in the Ticketmaster solicitation email does it mention COVID. But on the ticketing page, there is a link that goes to this:

The live entertainment industry has taken enhanced health and safety measures to protect you and its staff. However, an inherent risk of exposure to communicable diseases such as COVID-19 exists in any place where people gather. By purchasing a ticket through this website, you assume all risks related to exposure to COVID-19 and agree to the current terms of use.

In other words, when you’re surrounded by people singing “Sussudio” at the top of their lungs, you know what you’re getting into.

I suspect my friend won’t be there, love of the Big 80s notwithstanding.

*To put this into context, when I went to the tickets page it showed me that “Fans Also Viewed” Sting, Roger Waters, Barenaked Ladies, Steely Dan, Santana, Billy Joel, Rod Stewart, and Chicago. (This could take me down two rabbit holes, one predicated on the fact that with the loss of Walter Becker Steely Dan no longer exists, and the other about how while Rod Stewart does exist, no one who has owned and appreciated “Gasoline Alley” believes he does.)