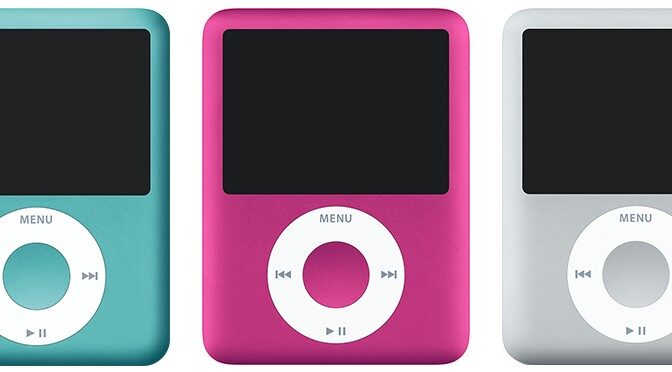 Several years ago I had the opportunity and honor to meet and spend some time talking with Elliot Scheiner, a producer and engineer who has been behind the board for an array of musicians, most of whom are acutely aware of the importance of the sounds that we hear when we listen to their recorded music. A recording engineer is the person to takes all of the tracks that have been recorded during a session (realize that there are as many as 96 channels on a sound board, and multiple recordings of each instrument and vocal) and orchestrates them—perhaps a slice here, a bit there—into something that we think is a done-in-one work. It is the ear of someone like Scheiner that creates a seamless tapestry.

I had in a box a third generation iPod nano circa 2008 that contains music that Scheiner had selected. I’d forgotten about it. Needless to say, when I excavated it, there was no power and it seems that the battery is no longer able to hold a charge.

But I pulled out a connector and plugged it in.

“Take Me to the River,” Al Green. No, not Talking Heads. It was written by Al Green and Mabon Lewis Hodges. Hear Al’s scream between verses and you’ll not listen to Byrne again. “The sixteen candles burning on my wall/Turning me into the biggest fool of them all.”

“Eight Days a Week,” The Beatles. Shocking to realize that it was released in 1965. Actually, it was ’64 in the UK, but the world wasn’t small then, so it was a few months later. Eight days, but the band’s seventh #1 single on the Billboard Hot 100. The the phrase allegedly came from a chauffeur, describing how much he was working. Work. Not Love.

“Fly Me to the Moon,” Diana Krall. It takes a lot of guts to do a cover of a song associated with Frank Sinatra and Count Basie. Yet Krall has vocally and musically more than the stuff to stand up to it. What’s interesting is that her voice isn’t sweet but strong. And it works.

“The Great Pagoda of Funn,” Donald Fagen. Steely Dan released Aja in the fall of ’77. Fagen released Morph the Cat, the album that includes this cut, in March 2006. I defy you to listen to this song and not hear Aja. With the current non-existence of Walter Becker, Fagen could tour doing this album and fully satisfy Dan fans. Or maybe he could call it “Steely Dann.”

“Waiting in the Weeds,” The Eagles. This may have a lyric that resonates now more than ever:

It is a lost love song—it continues,

“Center of the Universe,” The Eagles. Another cut from Long Road Out of Eden. It was released in 2007 and there wasn’t another album from the group—a live album, not a studio recording like this—until 2020. Arguably this is the band at its most accomplished. One bizarre thing about it, however, is that initially it was available only from Wal-Mart and Sam’s Club, or through the band’s website.

“In Your Honor,” Foo Fighters. A jarring change from the harmonies of The Eagles. What is clever about what Grohl and his colleagues did was to create a double album—this is the title track–with one disc being hard rock and the other more mellifluous and acoustic. This is from the first.

“Truckin’,” Grateful Dead. “Livin’ on reds, vitamin C, and cocaine.” The answer “What in the world ever became of sweet Jane?” Who would imagine that a song with that lyric would become perhaps the Dead’s most widely recognized song? Perhaps it has something to do with the fact that it gives nods to Chicago, New York, Detroit, Dallas, Houston and New Orleans. “Sometimes the light’s all shinin’ on me.” You know the rest.

“Edith and the Kingpin,” Herbie Hancock. This is from Hancock’s album River: The Joni Letters, which is an album that is a tribute to Joni Mitchell. (It was released in 2007, the same year a tribute album titled A Tribute to Joni Mitchell was released, with Elvis Costello doing a cover of Edith). Hancock’s version has Tina Turner doing the vocal. Yes, Tina sings Joni.

“An American in Paris,” James Levine and the Chicago Symphony Orchestra. It is probably hard to realize that George Gershwin, who composed “An American in Paris”—and the more widely recognized “Rhapsody in Blue”—is one of the people who made American music internationally legitimate. What is astonishing is that “Rhapsody” was written in 1924, when he was 26. Gershwin died in 1937, at the age of 38. He also wrote the opera Porgy and Bess. This is where our music came from.

“Rock You Gently,” Jennifer Warnes. When you know that she is the vocalists on “(I’ve Had) The Time of My Life” (“No one puts Baby in the corner”) you might be dismissive, but know that John Cale produced her third album. This song is. . .nice.

“Big Noise, New York,” Jennifer Warnes. A composition by Donald Fagen—who provides backing vocals to this track. (Scheiner is responsible for producing (with Warnes and Roscoe Beck), engineering and mixing The Hunter, the album upon which this, “Rock You Gently” and “Lights of Louisanne” appear on. The album also incudes covers of Todd Rundgren’s “Pretending to Care” and “The Whole of the Moon,” the Waterboys’ most well-known song.)

“Lights of Louisanne,” Jennifer Warnes. Clearly Scheiner is sweet on this album. An album with clean, sweet sounds. Van Dyke Parks plays accordion on this track. Wait for the crickets at the end.

“The Hunter,” Jennifer Warnes. See above.

“So What,” Miles Davis. A cut that makes you wonder why you don’t listen to more jazz.

“Drive,” R.E.M. This is a case where the transition from the Davis jazz to this is clearly decided.

“The One I Love,” R.E.M. One wonders how much of the appeal of the sound of this band comes from the mixing board. (Fun fact: Alton Brown, known for his work on the Food Network, was director of photography on the video for this song—which was directed by artist Robert Longo.)

“Under the Bridge,” Red Hot Chili Peppers. The opening chords could have come from an Eagles album. The harmonies about three minutes into the song couldn’t have.

“My Oxygen,” Richard Page. I had no idea who he is. Turns out he was lead singer for Mr. Mister. And before you sniff, know that he was a songwriter and/or session musician for a raft of performers who became far more famous (from Chaka Khan to Hall & Oates). He is one of those performers who have had what is the possibly-lucrative-but-still-unfortunate participation in a Ringo Starr All-Starr Band. (Here’s something frightening: the first rendition of that band included Joe Walsh, Nils Lofgren, Dr. John, Billy Preston, Rick Danko, Levon Helm, Clarence Clemons and Jim Keltner. A shiver and a recognition that musicians have bills to pay like the rest of us.)

“Shelter Me,” Richard Page. The title song from the album that also includes the above. It is music that never got the recognition that it deserves. Know that there are countless musicians for whom the same thing can be said, particularly as a result of the lost year.

“Smooth,” Carlos Santana. Probably one of the only songs that you voluntarily listen to that includes and was co-written by Rob Thomas. Tell me that when summer finally comes this cut from 1999 isn’t something that you’d listen to while sitting back with a few beverages?

“I Want To Take Your Higher,” Sly and the Family Stone. “Boom lacka lacka lacka.” When you think of the San Francisco sound of circa 1969 it could be the Jefferson Airplane, Quicksilver Messenger Service, Janis Joplin. But Sly and the Family Stone were as much a part of it as they were. This is serious music that has unfortunately been commodified. If you listen to this song and your hips don’t involuntarily move, go see an orthopedic surgeon.

“Moon Dance,” Van Morrison. How do you end this compilation of 25 performances? With Van Morrison’s jazz-infused composition. Listen to the Jeff Labes piano and John Klingbert bass. When we consider all of the foregoing work that Schneider organized, it is clearly a song that both contains influences and has paid many of them forward.