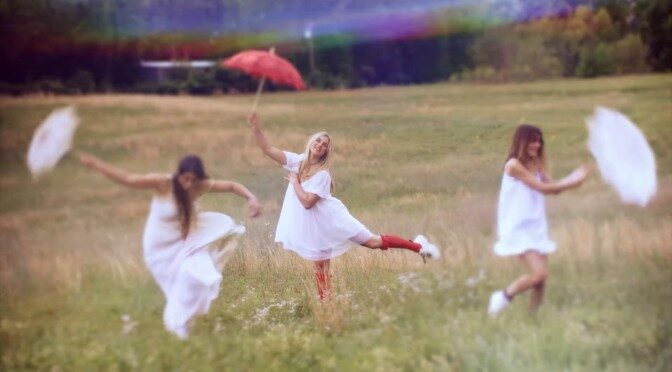 Directed by Erica Silverman. From Welcome To The Wasteland, out June 25. Single out now.

Alex McArtor is an 18-year-old Austin songwriter who names David Lynch as a key influence on her storytelling. And you might catch some Lynchian vibes in the video for “Bras and Jeans” in which a group of innocent teenagers get a little witchy in a meadow. The irresistible guitar riff sounds like New Order.

It’s not lost on me that — as a dude watching a bunch of young women frolicking around in sundresses and bouncing on trampolines — there is undeniably a bit of voyeurism going on. McArtor and director Erica Silverman are obviously playing on those themes, and it works. It’s an interesting conundrum to put us in the middle of. And the ambiguity of that goes both ways: McArtor sings, “We kind of like you watching, sorta,” with the “kind of” and “sorta” doing a lot of heavy lifting in that line.

Anyway, it’s a cool song and a smart video with some real complexity to it.

Via For the Rabbits.