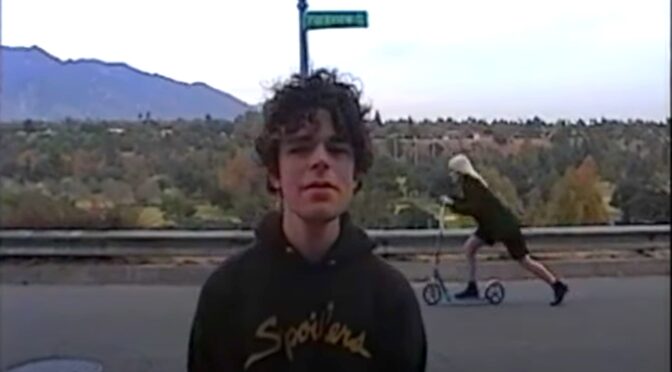 Directed by Zoe Donahoe and Adam Sputh. From the Count the Stairs EP, due February 26. Single out now.

The kids are alright.

Charlie Hickey is 21. And he’s been writing songs since grade school. The story goes that he impressed Phoebe Bridgers when he was 13 by covering one of her songs. Eventually she introduced him to her drummer/ex-boyfriend Marshall Vore who collaborated with Hickey and produced his upcoming EP. It’s all about who you know, I guess, but it doesn’t hurt to write good songs and be able to perform them so effortlessly.

He went to college for a year before he dropped out to focus on his music, but it sounds like he was there long enough to capture the essence of the whole experience: “There’s not a problem here that can’t be solved with liquor, stickers, and strawberry Boone’s.”

“I was going to school at the time and was feeling quite alienated in this little world where everybody was instantly partying with their brand new best friends and fun came so naturally. I found solace in Marshall’s studio on the weekends. This was our first proper attempt at writing together and we were writing something really horrible. We were both kind of delirious and Marshall started singing the verse melody for the song as a joke, making fun of what we had been trying to write. But when I heard it, I said to him, ‘Wait, that’s the song that we’ve been trying to write.’ After that, we wrote the rest that night and recorded it the next day.”

And that’s all it takes!

The video makes me nostalgic. It was so much fun to be young and bored and goofy, hanging out with your crew and doing nothing, cracking each other up. Looking for excitement and never finding it.