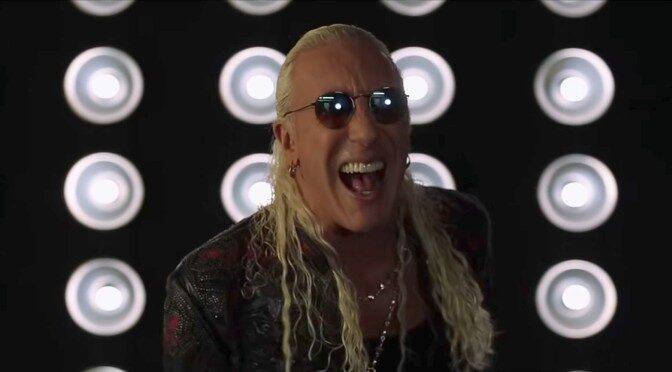 Directed by Paul McGuire. From Leave A Scar, due July 30 on Napalm.

I am a little hesitant to post this because I add every song I put up on GLONO to a playlist that I listen to fairly regularly, and well…I’m not convinced that I’m ever going to want to listen to this again. I wish it was good. I really wanted it to be good. But man, it’s just not.

I like Dee Snider. He seems like a great guy. I saw him at Riot Fest a few years ago and it was a really fun set in the middle of a hot, sunny day.

I’ve sort of felt bad ever since I tweeted a nasty comment about his cover of “Cabaret” and he actually RT-ed it. “You can’t please everyone! lol!” Made me question the whole practice of tagging celebrities. Like, do you really want them to see this? Why are you posting mean stuff at all? Choose the targets of your vitriol carefully. Don’t be a dick.

Because Twisted Sister changed my life. I’ve told this story before, but one day when I was 12 or 13 my mom asked me to make my bed or do my homework or something like that, and I started thrashing around my room screaming “We’re Not Gonna Take It.” My mom had earlier seen me watching that video on MTV and did not approve. At all. Convinced that my defiance was a direct result of my access to deviance like that (garbage in, garbage out), she called up the cable company and told them she no longer wanted MTV in her house. Much to my horror, the cable company disconnected that one channel. It wasn’t even just scrambled, like HBO. Nope channel “I (22)” was blacked out. All the way. I wanted my MTV but it was gone.

Thirty years later, I experienced one of the greatest parenting moments of my life when I introduced my 9 year old son to the “I Wanna Rock” and “We’re Not Gonna Take It” videos. They’re still great and I’m happy to report they still have the same effect on kids today as they did back then. Pure, unadulterated joy.

I wanted this new song to provide even a fraction of that joy. But it doesn’t.

One thought on “New Dee Snider: I Gotta Rock (Again)”