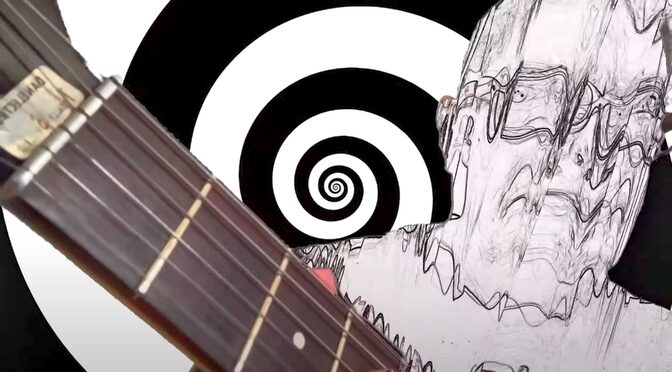 From Born Stupid, due February 12 on Shimmy Disc/Joyful Noise.

True* story: Paul Leary once aimed a shotgun directly at my face and pulled the trigger. I saw the flame shoot out of the barrel and everything. This was at Lollapalooza in 1991 and I was way up on the lawn at Pine Knob, but I swear he was aiming at me.

Anyway the Butthole Surfer is releasing a solo album, his first since The History Of Dogs in 1991, which is the same year that I remember him shooting at me. Thirty years later, it’s time for a follow up. Why not?

With so much strife and peril in this world
I’d like to help make things better
But, instead, I had to be born stupid
Without no sense at all.

Leary told Flood magazine that the song “was born from a revelation I had while riding my bicycle that I am not as smart as I wish I was. The video for this song is my first video ever attempted. And it is stupid.” He is right. But who cares?

Born Stupid will be the first release on the newly relaunched incarnation of Shimmy-Disc, the label founded by Kramer that put out all those Bongwater and King Missile albums back in the 80s and 90s. Kramer is a legend and if you haven’t read his Believer magazine interview about touring with the Buttholes, you really should, because it’s amazing.

Seems like a great day to start something new!

* Fact check: Goddamn YouTube ruins a story once again by revealing it was actually Gibby Haynes who was packing heat on that tour. Oh well.