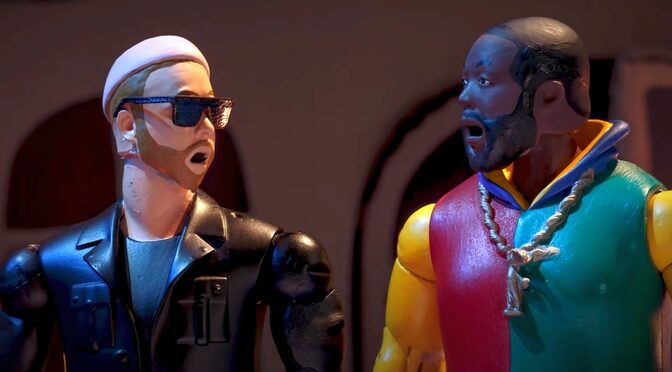 Video: Run The Jewels – “Walking In The Snow”

Run The Jewels - Walking In The Snow (Official Music Video)

Directed by Chris Hopewell. From RTJ4, out now.

It seems like a lifetime ago already, but RTJ4 was rush-released on June 3 last year, just ten days after the murder of George Floyd on camera by Minneapolis police officers. The world was justifiably outraged. There were marches. There were riots. There were violent clashes between protesters and white supremacists. Our cities were on fire. Everything was a mess.

And there’s no better soundtrack to help process the insanity than Run the Jewels.

And every day on the evening news, they feed you fear for free
And you so numb, you watch the cops choke out a man like me
Until my voice goes from a shriek to whisper, “I can’t breathe”
And you sit there in the house on couch and watch it on TV
The most you give’s a Twitter rant and call it a tragedy

While “Walking In The Snow” reflected the moment perfectly, it’s depressing that it was written and recorded six months before anybody had ever heard of George Floyd. “I can’t breathe” was the last thing said by Eric Garner, who was choked to death on camera by a New York City police officer in 2014. This is nothing new. Cops have been killing black people in this country with impunity since the “slave patrols” of the 1700s.

We’ll see if any real substantial policy changes come out of the George Floyd protests last summer. So far, not much. Qualified immunity is still the law of the land, and until it’s abolished law enforcement officers are legally protected from having to face any consequences for wrongdoing.

Maybe 2021 will be the year of systemic changes to policing. But that’s never going to happen unless the people demand it from their elected leaders from the local level all the way up to the president.