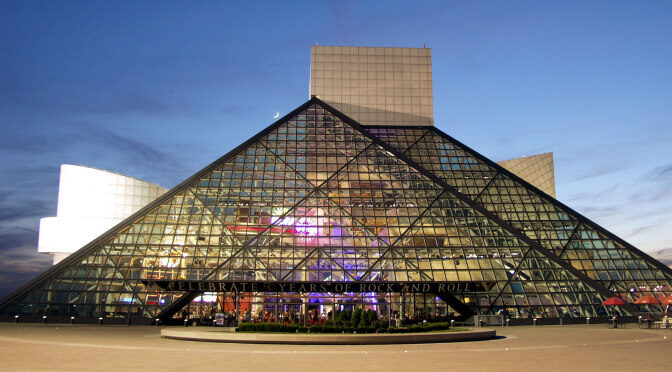 Lillie P. Bliss was an art collector and patron of artists. Mary Quinn Sullivan was an America art teacher and textbook author. Abigail Green Aldrich Rockefeller was, yes, a Rockefeller; she married John D. Rockefeller, Jr., the only son of the oil magnate.

In the late 20s those three women got together and created the Museum of Modern Art (MoMA) in New York, which opened in 1929. According to MoMA, Bliss, Sullivan and Rockefeller wanted to “challenge the conservative policies of traditional museums and to establish an institution devoted exclusively to modern art.”

In 1983 the Rock and Roll Hall of Fame Foundation (RRHOF) was established by Ahmet Ertegun. Among other things, he was the co-founder and president of Atlantic, perhaps the most influential rock label of all time; he sold his interest in the label in 1967. He made millions. Not petro wealth. But comfortable.

Joining Ertegun on the board of the foundation were Jann S. Wenner of Rolling Stone; Seymour Stein, who co-founded Sire Records; Bob Krasnow, whose resume includes being the chairman of Elektra Records, and three others.

The foundation decided it needed a home base. It decided on Cleveland, with a groundbreaking in 1993, with participants including Pete Townshend (did he windmill a shovel?), Chuck Berry and Sam Phillips. Architect I.M. Pei was engaged to design the building, which includes a glass pyramid (it is worth noting that in 1983 Pei designed the pyramid that is part of the Louvre).

The building was dedicated two years later, with the ribbon being cut by, among others, Yoko Ono and Little Richard.

When I looked at the women who founded MoMA, I have the sense that they were in it to promote modern art and artists. Let’s face it, in 1929 the world economy was tumbling into a morass that required years to extricate itself from. Perhaps there was some notion of raising the visibility of modern art and thereby increase the value of whatever pieces they may have individually had, but somehow I think there was more selflessness involved.

When I looked at the people who established RRHOF my first sense of things was that this was largely a play to sell more records. But when you look at the lists of the first class of inductees, that clearly wasn’t the way things worked, at least not at the start.

Now I am not so sure.

A rule of who can be inducted is that the artist must have released their first record 25 years prior to induction.

After all, the place that people go to in Cleveland is a museum. And doesn’t that seem like a place where one finds things that are a least a little old?

(This strikes me as strange: In checking out the ticket prices for 11:30 am on May 16 (an arbitrary time and date), I see that the price of a ticket for an Adult is $28. Then there is the Youth ticket for $18. But Youth is defined as “age 6-12.” So does this mean that in the world of rock and roll as soon as you’re a teenager you’re an adult?)

“THE ROCK HALL’S MISSION TO ENGAGE, TEACH AND INSPIRE THROUGH THE POWER OF ROCK & ROLL IS IMPORTANT.”

If you have to tell someone that something is important, is it really important?

Did the women of MoMA say, “This modern art is important” or did they simply display modern art?

Of those who were inducted this year, Todd Rundgren is the person whose music I have always had the greatest appreciation for; reading Rundgren’s comments to Billboard when he’d been nominated in February makes me appreciate him all the more.

“It’s no secret that I don’t care about it.”

“It doesn’t matter how many times they nominate me. It’s not gonna make me care.”

“True halls of fame are for retirees and dead people, because your legacy has been established.”

A wizard, a true star.

There is something to be said for the curatorial practice for all manner of cultural endeavors.

It was recently announced, for example, that the Bob Dylan Center® will open in Tulsa, Oklahoma, in May 2022, and it will be, according to the announcement from the Bob Dylan Center®, “the primary public venue for The Bob Dylan Archive® collection.” In it: “a priceless collection of more than 100,000 items spanning Dylan’s career, including handwritten manuscripts, notebooks, and correspondence; films, videos, photographs, and artwork; memorabilia and ephemera; personal documents and effects; unreleased studio and concert recordings; musical instruments, and many other elements.”

(The registration mark–®–is a nice touch.)

He also won a Nobel Prize for Literature in 2016.

That, I would argue, is IMPORTANT.