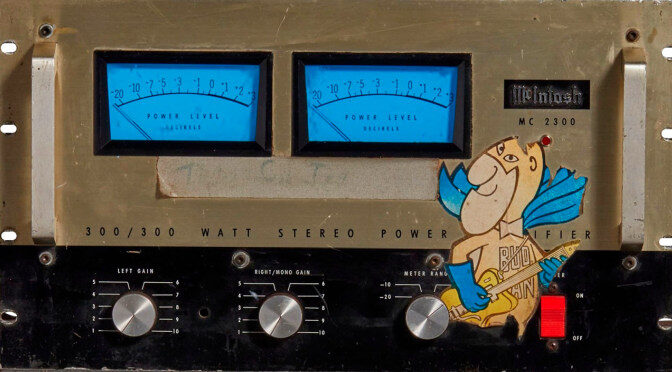 I recently had the opportunity to spend some time in a 2022 Jeep Grand Cherokee. It is, in a word, grand.

One of the striking things about it (no, not that it has 4×4 capability that allows the vehicle, which has civilized comfort, to drive the Rubicon Trail, which is something that is simply unimaginable unless there is a certain level of desire for potential catastrophe that one has) is the fact that it has a McIntosh audio system with 19 custom-designed speakers (including a 10-inch / 25.4-cm subwoofer), 950 watts of power and a 17-channel amplifier.

But Jeep is now the only auto brand on the planet with McIntosh.

What is interesting about the deployment in the Grand Cherokee is that on the 10.25-inch touchscreen in the middle of the dashboard you can see a simulated image of the classic McIntosh dial with the needle sweeping up and down across the face.

Some quick math puts it 52 years ago.

Who knew that vacuum tubes would still be used today? While it might be like a carburetor in a 2022 Jeep, apparently it isn’t.

I recently had (and I promise this is the last paragraph that will open like that) the opportunity to have a drink in Citizen Vinyl in Asheville, North Carolina.

Yes, they are pressing albums there. You sit in an open space and can see, through a glass wall, LPs being produced. While the process is largely automated, with the pressed albums being fed onto a spindle, where they are stacked, the machine operator had to get involved more than occasionally as there was build-up of the scrap polymer that jammed up the process.

Wouldn’t you know it: according to stats from the Recording Industry Association of America (RIAA), there was a unit increase from 9.1 million LP/EPs purchased in the first half of 2020 and 17 million in the first half of 2021. . .and the PVC that is used in the formulation of vinyl for records is being affected by the broken global supply chains.

Of course (see, told you I wouldn’t mention something experiential), streaming accounted for 84% of music revenues in the first half of 2021 and physical media just 10%.

Statista has developed a bar chart indicating the “Average amount of streams needed to reach payout of $1.”

While you might imaging that Spotify is somewhat miserly in terms of its payout to artists, that is far from being the case.

That is, 312 plays equals a dollar on Spotify.

But for an artist to get $1 on Tencent Music Entertainment, a Chinese streaming service, it requires 2,500 plays.

Apple, incidentally, shows itself to be the most generous. Each play is worth a penny, so 100 plays and. . . .

According to a recent story in Scientific American, “Humans have long been the only mammals known to utilize rhythm to create music.”

When you see a phrase like “have long been,” you know something is going to go south.

And lo and behold, a group of researchers went into the jungles of Madagascar to record, then analyze (not in the jungle, but back in the lab),the calls of the indri lemur (Indri indri).

They collected 636 indri songs from 20 different family groups. Based on the patterns measured, they determined the lemurs have rhythm.

Jack Tamisiea writes in his article, “Although indris and human composers may utilize some similar structures, each likely developed musical abilities on their own.” Fair.

And with the recently concluded COP26 in mind, a fact that he brings up should give us concern: “deforestation and hunting have pushed indris (as well as gibbons) to the brink of extinction. Indris are particularly vulnerable; some experts estimate that as few as 1,000 remain in the wild, and all signs point to that number decreasing as Madagascar’s forests are predicted to decline by as much as 93 percent by 2070.”

However, the first thing that was agreed to at COP26 by 133 countries, with their land masses accounting for 90.07% of the globe’s forests, was a commitment to end and reverse deforestation by 2030. Madagascar is one of the signatories.

Yet the BBC quoted Professor Simon Lewis of University College London, an expert on forests and climate, as saying, “It is good news to have a political commitment to end deforestation from so many countries, and significant funding to move forward on that journey.” (There is a government and corporate commitment of $19.2-billion to be spent on efforts.)

Lewis went on to note, however, that back in 2014 there was a similar declaration “which failed to slow deforestation at all.”