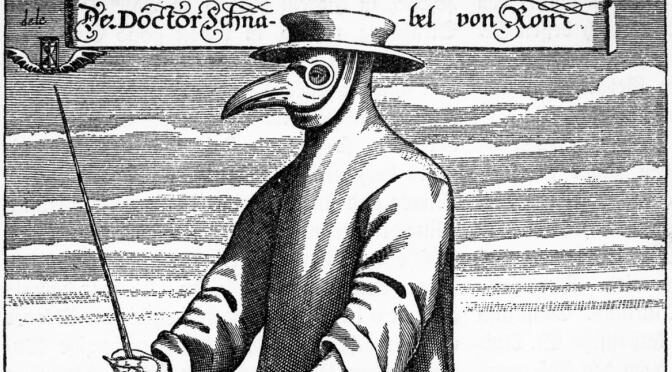 In 1722 Daniel Defoe—of Robinson Crusoe fame—published A Journal of the Plague Year: Being Observations or Memorials, Of the most Remarkable Occurrences, As well Publick and Private, which happened in London During the last Great Visitation in 1665.

The “Visitation” in question was the bubonic plague.

During that horrific event 68,596 people died. That was approximately 15% of the population of London.

According to Britannica (Wikipedia isn’t everything), “The disappearance of plague from London has been attributed to the Great Fire of London in September 1666. . . .”

There you have it. Burn the place down.

It isn’t like they were strangers to plagues. There was the Black Death of 1347 to 1350, which was a pandemic that infected much of the known world at the time. It killed an estimated 75-million to 200-million people. The bubonic plague debut, as it were. Ways people tried to cure themselves included cutting up pigeons and rubbing it on bodies; drinking vinegar (bleach, anyone?) and eating arsenic; sitting in sewers.

Just imagine if our ancestors had the opportunity to go to the local blood-letter, barber or apothecary for a couple of vaccinations.

How many of them do you think would have avoided the opportunity?

And we think we’re oh-so advanced.

According to D. Allison Arwady, the Chicago Department of Public Health Commissioner, Lollapalooza 2021 was not a “super-spreader” event. There were some 385,000 in attendance during the four-day event. Approximately two weeks later there were only 203 attendees who tested positive for COVID-19. That’s 0.05%. Of course, if you’re one of the 203 people and it turns out that you’re going to end up in an ICU, the statistics probably don’t matter much to you, any more than the people who were inflected by the bubonic plague. At least you won’t have to sit in a sewer.

While some people might think the stats from Lollapalooza are some sort of green flag for all manner of outdoor events, it is worth keeping in mind that the attendees had to follow protocols in order to attend the show:

“In accordance with City of Chicago requirements, full COVID-19 vaccination or negative COVID-19 test results will be required to attend Lollapalooza 2021.”

Several musicians have cancelled or postponed concerts of late including:

• Tony Bennett (well, he is 95, so clearly there are some health concerns)
• Stevie Nicks (she tweeted, in part, “Because singing and performing have been my whole life, my primary goal is to keep healthy so I can continue singing for the next decade or longer.”)
• Lynyrd Skynyrd (guitarist Rickey Medlocke tested positive for COVID)
• Counting Crows (someone affiliated tested positive)
• Michael Bublé (like Skynyrd, he is pushing back performances to October—good luck with keeping that schedule)
• Limp Bizkit (it performed at Lollapalooza, but has cancelled its August tour dates, with Fred Durst telling Billboard, “Even if the performers, crews, staff, and promoters do their best to ensure safety on and behind the stage, that doesn’t ensure the safety of the audience as a whole.”)
• Joe Russo’s Almost Dead (yes, even cover bands area concerned about COVID)

And concert-goers who want to see performers including the Foo Fighters, the Eagles, Phish, Maroon 5, and Dead & Company are requiring proof of vaccination or negative COVID tests.

Recently, the Music Venue Alliance of Nashville (MVAN) put out a statement that listed 12 venues in the city that have put COVID protocols in place for those patrons who want to go there. Proof of vaccination or negative tests required.

Here’s something potentially positive about the effect of the virus on music.

The MVAN writes on its site: “MVAN was founded on an idea of collaboration and enlightenment that stat dormant before the novel COVID-19 virus brought the fragile, yet complex ecosystem of Nashville music to an abrupt and unyielding halt. Wrought with the unbelievable difficulty of shuttering our venues and laying off our teams the independent music venues’ owners and operators found strength in each other.”

In other words, collaboration and attention being paid to how they’re going to be able to operate in a way that will keep the doors open without making their employees, patrons and musicians sick.

You don’t want to have to burn down the place. Or sit in a sewer.