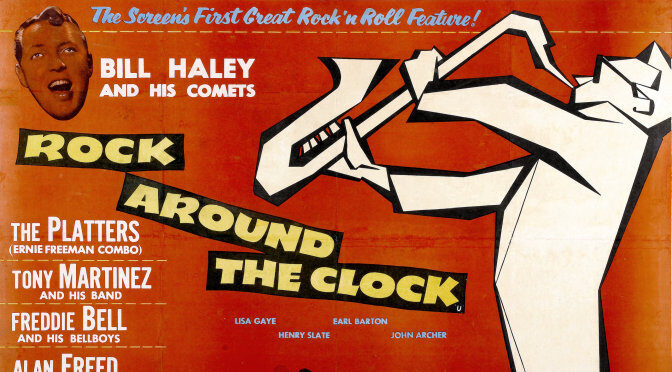 On September 11, 1956, the movie Rock Around the Clock opened in London. And after the showing at the Trocadero there was a bit of a kerfuffle with teens gone rowdy. This resulted in other theaters in England cancelling their showing of the movie.

To which I can only think “Huh?”

Fred F. Sears directed the film, which was shot in January 1956. This was near the end of Sears’ career, as he died of a heart attack, age 44, in November 1957. It is worth noting that 16 movies Sears directed were released between Rock Around the Clock and shortly after his demise, with the five subsequent to Rock being Earth vs. the Flying Saucers, The Werewolf, Miami Expose, Cha-Cha-Boom! and Don’t Knock the Rock. (In all, he directed 60 films—which is all the more remarkable when you know that he didn’t start until 1946.)

Which pretty much gives you a sense of (a) Sears’ oeuvre and (b) the types of movies that were being released back then. Things change.

It was actually the second time the tune had been released, with the first being by Sonny Dae and His Knights, in 1953. Sonny Dae & His Radio Raskals were performers on the “WRVA Old Dominion Barn Dance,” which also featured Lester Flatt, Earl Scruggs and the Carter Family. Which pretty much gives you a sense of (a) how musical performances were taken much less seriously back then and (b) that musical performers, like the Carter Family, are the stuff of Ken Burns’ documentaries today.

When you read the date in the first sentence of this you probably thought back to last Saturday, September 11, 2021, the 20th anniversary of the day that irrevocably changed America.

On that day in 2001 Jake Brown posted this on Glorious Noise:

God help us. I get into work today to find a group of people staring at the television. Just as I realize that the smoking building is the World Trade Center, I see a plane fly right into the second tower and explode. Live on tv.

All the major news websites are totally down right now. Either overwhelmed or just plain off. This is fucked up.

It was fucked up.

As part of The Washington Post’s retrospective on 9/11, film critic Ann Hornaday wrote, in part:

“In the immediate aftermath of 9/11, Hollywood shied away from darkness and violence, giving us easygoing escapist fare like the “Pirates of the Caribbean” and Harry Potter movies. . . . [F]or the most part we’re still in the same escapist bubble that immediately followed the event, and entertaining spectacle for its own sake has even more thoroughly colonized the medium.”

Take any slice of time between 2001 and today and I would argue that we are far less escapist in our entertainment than, say, in the day of Fred F. Sears. Fifty years before 2001, in 1951, Sears directed Prairie Roundup, Ridin’ the Outlaw Trail, Snake River Desperadoes, Bonanza Town and Pecos River. I think that Harry Potter and the Sorcerer’s Stone, released in the U.S. November 16, 2001 (it was released a couple weeks earlier in London, with no reports of rowdiness), is undoubtedly darker than Ridin’ the Outlaw Trail. But I could be wrong.

(Lest anyone think that in 1951 things were just much less sophisticated than they are today, know that J.D. Salinger’s The Catcher in the Rye, William Styron’s Lie Down in Darkness, James Jones’ From Here to Eternity, and Samuel Beckett’s Molloy—among others—were published in 1951. Molloy: “I am still alive then. That may come in useful.”)

Somehow, when it comes to popular entertainment, we may be trying too hard. Or think we are.

Most who died in the buildings in New York and Washington, DC, didn’t see the planes coming.

All who died in hospital beds across the country didn’t see the virus that infected them.

But it is a false equivalency. One was about deliberately killing people. The other is about biology.

In 1957 there were two Sears’ films released as a double bill: The Night the World Exploded and The Giant Claw.

In 1957 both the U.S. and the U.S.S.R. launched intercontinental ballistic missiles.

History is always fucked up.

Maybe we just need to take the serious things like terrorism and viruses seriously.

And put a little more rock and roll of a joyous nature in our lives.

To say nothing of B-movies.