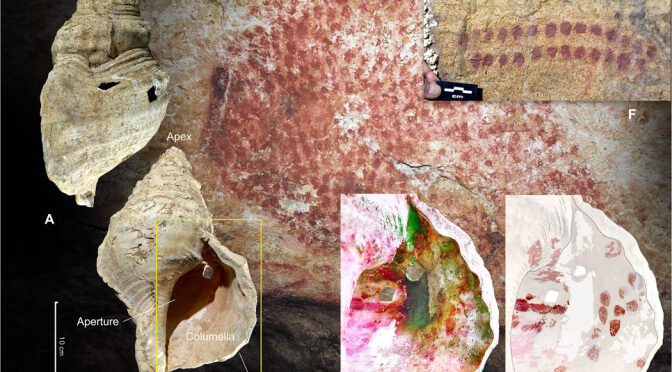 The anthropologists and ethnomusicologists conclude “that the Magdalenian occupants of this site [the “decorated cave of Marsoulas”] transformed this shell into a wind instrument.”

Maybe not brass, but a horn nonetheless.

I will confess to being unfamiliar with The Pirouettes, Fauve, Terrenoire and many other French bands. But it seems that France not only was the home of that early horn, but where music was first recorded.

Seems like the French don’t get the credit they deserve when it comes to music. Of course, who among us didn’t grow up singing “Frere Jacques”?

(And because things like this happen: It is worth noting that on the second, self-titled Blood Sweat & Tears album, one of the better cuts is “Variations on a Theme by Erik Satie.” Satie, a French composer of the late 19th-early 20th century, among other things, developed musique d’ameublement, or “furniture music,” which was were ambient music came from. Brian Eno must thank him every day.)

Édouard-Léon Scott de Martinville invented the phonautograph in the 1850s and at the end of that decade recorded “Au Clair de la Lune,” some 20 years before Thomas Edison recorded “Mary Had a Little Lamb” (1878).

In my recent piece on some music selected by record producer and engineer Elliot Scheiner there were songs by the Eagles, which caused some dyspepsia among some readers. Said readers may be even more disappointed to learn that according to the RIAA, Their Greatest Hits 1971-1975 is the best-selling album, with 38-million copies sold. While Michael Jackson’s Thriller (1984) had held that position for some years, it is 13% behind, with sales of 33-million. And to add a little bit more stomach acid, in third place is Hotel California, with sales of 26-million.

The Beatles make it into the top five, with The Beatles (a.k.a., “The White Album”), with sales of 24 million.

Fourth? Back in Black by AC/DC. Its sales are 25 million.

Which means the most-recent is 41 years old.*

*Rounding out the top 10 are: Greatest Hits Volume I & Volume II by Billy Joel; Led Zeppelin IV; The Wall by Pink Floyd; Double Live by Garth Brooks; Cracked Rear View by Hootie & the Blowfish. The Brooks album is the most recent having been released in 1998.