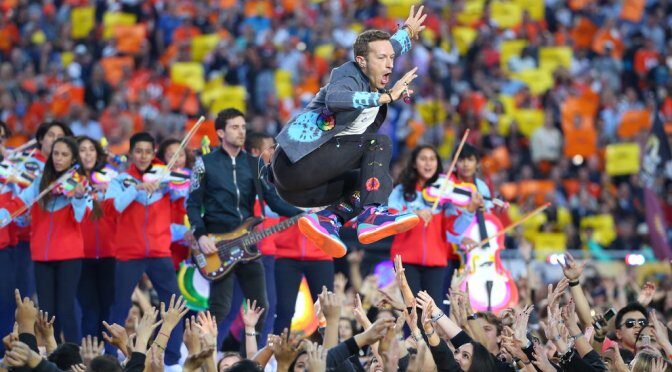 Here’s an interesting development vis-à-vis the existence of a band, a perennial theme in this space (about which Henry Melrose tells me, “You’re not beating a dead horse because you’ve been at it so long that all that’s left are the shoes”).

Chris Martin of Coldplay said in an interview on BBC Radio 2 last week regarding the group, “Our last proper record will come out in 2025 and after that I think we will only tour.”

He added, “Maybe we’ll do some collaborative things but the Coldplay catalogue, as it were, finishes then.”

And on the topic of said catalogue, Martin said to NME earlier this year, “We’re going to make 12 albums.”

Which is to say that there will need to be three more albums before they’re done. Given the cadence with which it had been putting out music, it is going to have to speed things up if the end is 2025.

While Martin’s comment about 2025, including the finite boundary of the number of albums, it seems, is being taken by some people as the end of Coldplay, that arguably isn’t so, even if there is, post-25, no more new “proper” Coldplay recordings. (Whether this is perceived to be a good thing or a bad thing is beside the point.)

But is that the case?

Assuming that Martin, Buckland, Berryman and Champion keep touring under the “Coldplay” banner, the band continues. They are a thing with independent existence (until they no longer exist, or a sufficient number of them decide to give it up in some way).

The catalogue may be finished, but that simply means that the catalogue won’t have new entries in it. It won’t be expanded. But it will still exist. There will still be copies of Parachutes out there.

What if the band decides that starting in 2025 the catalogue is finished such that the band will never play any of the songs that are included on those 12 albums, that they will only perform Elvis or Pat Boone or Björk or whomever covers?

Even though the songs as-written are not Coldplay compositions, it is still Coldplay “music” in that it is something that is being performed by the band.

In 1976 Todd Rundgren released Faithful. The cuts on side one, and the bands/musicians who originally recorded them, are:

As the name of the album indicates, Rundgren’s approach was to perform faithful renditions, not interpretive renditions, of those six works. The objective was to “sound” like the musicians he was covering. Clearly, however, no matter how close he was able to get to the originals, no one was going to think that Rundgren’s “Rain” is The Beatles’ “Rain.” The music as performed on that album is all Rundgren, just as “Tutti Frutti” and “Long Tall Sally” as performed in 1956 by Pat Boone would be mistaken by no one—then or now—with Little Richard’s performances.

This is not going to divert down into the reliability of covers. (OK: a little. Think about this: sound recording was developed in 1854 by Edouard-Léon Scott de Martinville, an editor and typographer who worked for a Parisian scientific publishing house. He called his approach “phonautography.” The original objective was to record spoken words and then have the wherewithal to do analysis of the sounds. However, according to an essay about Edouard-Léon Scott de Martinville’s work appearing on the site of the National Park Service (presumably because it operates the Thomas Edison National Historical Park in West Orange, New Jersey, and while Edison is credited with inventing the phonograph in 1877, which gave rise to the modern music industry as we know it, the historians want to make it clear that there was prior art in this field, which happened to be some 20 years pre-Edison), in 1860 Scott made a number of recordings on a phonautograph: “He sang songs, he recited excerpts of poetry and plays in several languages. Along with his previous experiments these are humanity’s first recordings of its own voice.” (Emphasis added) The point is, for every musical work that was created prior to the second half of the 19th century all that exists are covers.)

So Coldplay fans (and there must be more than a couple of them, as the band has sold more than 100 million records, which is on the order of every person in Tokyo, Beijing, New York, Los Angeles and Moscow getting a copy) need not be concerned. To this day you can hear Edison reciting “Mary Had a Little Lamb,” which he recorded in 1877, so even if the catalogue will soon be closed, the music will continue, live or otherwise, for good or ill.