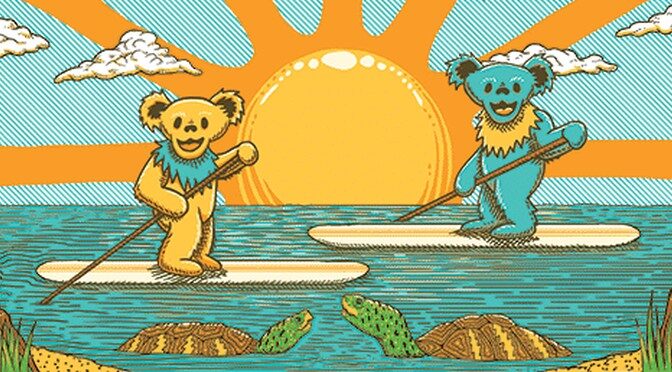 “Despite ambitious protocols, the Omicron variant with its unexpectedly high transmissibility rates is pushing the limits of health safety, travel and other infrastructures. Thus, Sundance Festival’s 2022 in-person Utah elements will be moving online.”—the Sundance Institute

The event timing: January 20 to January 30
The decision to go virtual: January 5

“After careful consideration and analysis with city and state officials, health and safety experts, the artist community and our many partners, the Recording Academy and CBS have postponed the 64th Annual GRAMMY Awards Show. The health and safety of those in our music community, the live audience, and the hundreds of people who work tirelessly to produce our show remains our top priority. Given the uncertainty surrounding the Omicron variant, holding the show on January 31st simply contains too many risks.”—the Recording Academy and CBS

The event timing: January 31
The decision to postpone the event: January 5

“With much sadness and after great consideration of every possible scenario, the @PlayTheSand shows in Riviera Cancun on January 7-10 and January 13-16 have now been canceled by @CID_Presents due to the spiking COVID-19 cases…Dead & Company and @CID_Presents tried everything possible to bring normalcy and to deliver a great experience and amazing music, but with each day it became increasingly clear that canceling is the correct thing to do for the fans and for our crew… Please refer to the Playing in the Sand email that will be sent shortly with all details about refunds. See you soon, hug your loved ones, stay safe and be kind.”—Dead & Company

On January 5 it was announced that John Mayer, Dead & Company front man, was not going to participate in the first weekend of Playing in the Sand; he had tested positive for COVID-19. (Were this to be an issue, arguably, given still-existing airline requirements, he might not have been able to make the second weekend, either.)

CID Entertainment, the organizer of the event, put out a statement saying, “It is with very heavy hearts that we must cancel both Dead & Company Playing in the Sand 2022 event weekends, due to additional COVID-19 cases amongst multiple artists and staff. Despite strict Health & Safety protocols, these unprecedented times have forced us to make a difficult decision, and we fully understand the inconvenience and disappointment it may cause.”

Consider the timing of the cancellation: one day before it was to begin.

Odds are that those who purchased the package (“Each Playing in the Sand package includes concert access, resort accommodations, food and drink, and shuttle transportation between Cancún International Airport and the Moon Palace Cancun”) for the January 7 start bought their airline tickets so that they’d arrive on January 6.

So there is a group of Deadheads at the Moon Palace Cancun, getting an announcement via Instagram and/or Twitter telling them that they are in that hotel and ought to figure out what they hell they are going to do until their return flight. (As you’ll see below, leaving the resort isn’t advised.)

Are they in a resort that offers all manner of diversions and amenities? Yes.

To their credit, CID and the Dead organization are going to provide full refunds to those who traveled to the venue and get a full refund. Presumably this means that they are going to get the “resort accommodations, food and drink, and shuttle transportation.”

And for those who opt to travel to the Moon Palace Cancun for the timing of the second weekend (which would probably be the ideal opportunity for a local Dead cover band to make bank), they will get a refund except for a $600 flat fee for being at the hotel.

But let’s get back to the timing.

Are there more moving pieces in a concert than in a film festival or in a music awards ceremony bringing in acts from a wide array of geographies?

Let’s face it: the film industry and the Grammy machine are not exactly known as being soft-hearted. This is real.

Omicron may be “milder.” But the number of hospitalizations and deaths continue to rise.

Do performers want to be out in the world on any kind of stage, particularly those who have spent their lives doing it and who recognize that the opportunities, even were the world not in the midst of a pandemic, are waning?

Or consider the stats for COVID-related deaths by age in the U.S. and the zeal of Weir, Kreutzmann and Hart is really encompassed: According to Statista, for 2021:

You’ve really got to want to play, N95 masks notwithstanding. (Mayer, incidentally, is 44 and he is part of a cohort that represents 12.3% of the population and 3.9% of deaths.)

On January 5, the day Mayer’s infection was announced, the Playing in the Sand website updated its COVID-19 policy. The verbiage included masking requirements and assurances that “guest-facing” members of the Moon Palace staff are fully vaccinated and tested daily. It explained that guests who are diagnosed with COVID would be put into “complementary” quarantine rooms, and should those rooms be fully occupied, “CID Presents will arrange for lodging at a nearby hotel and cover all associated transportation and lodging costs.” And there’s this: “We highly encourage guests not to leave the resort throughout their Playing in the Sand vacation. Therefore, all CID Presents-hosted off-site adventures have been canceled and will be automatically refunded.”

Do you get the sense from that that organizers realized the fire had started and there was a concern that it would turn into a conflagration?

And then January 6, it gets shut down.

The day before it was to begin.