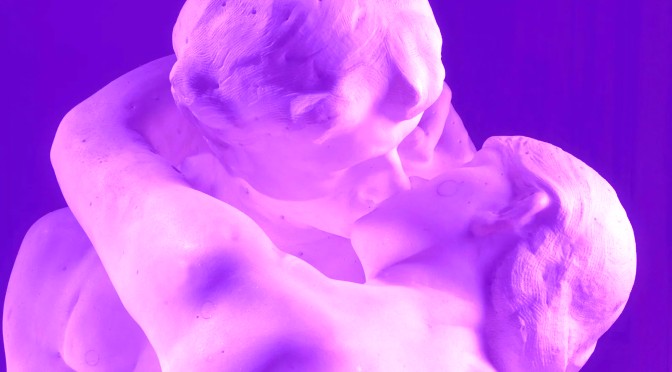 You Just Put Your Lips Together and. . .

Rock and roll, from the very start, has always been about love. Not necessarily deep, abiding love because, let’s face it, the audience for a classic 2:30 song is not someone who is necessarily going to spend time pouring over the Compleat Works of John Donne—

“Come live with me, and be my love,
And we will some new pleasures prove
Of golden sands, and crystal brooks,
With silken lines, and silver hooks.”

–after listing to “I Want to Hold Your Hand,” #15 on Rolling Stone‘s “500 Greatest Songs of All Time”; #1 is Aretha’s “Respect” and there is something about more than kissing going on here:

“Ooh, your kisses, sweeter than honey
And guess what? So is my money
All I want you to do for me, is give it to me when you get home”

And on the subject of kisses, there is the all-time lip-locking Hall & Oates’ “Kiss on My List”:

“But if you insist on knowing my bliss
I’ll tell you this
If you want to know what the reason is
I only smile when I lie, then I’ll tell you why

Which leads to this fun fact of the staple of songs, kissing.

So far as I know, there are no songs about cold sores. (Perhaps an opportunity there for someone.) [I apologize in advance, Mac, for introducing you to this one. -ed.]

According to a study recently published in Science Advances on DNA extracted from a 5,000-year-old tooth, HSV-1, the herpes strain that gives rise to said sores, “hint that changing cultural practices during the Bronze Age—including the emergence of romantic kissing—could have factored into HSV-1’s meteoric rise,” writes Nature.

As the uninestimable Toby Keith has it in “You Shouldn’t Kiss Me Like This,”:

No Static at All

One might make the case that there are as many songs about cars as there are about kissing, although cars might be a subset of kissing. The Beach Boys actually made cars a genre onto itself.

That can’t be added to Rod’s long list of subsequent sins against rock as the song was written by Bernie Taupin and Elton John.)

What is interesting is the response to the audio sources that are used when being in a car.

The study found that this year, 73% responded that the audio source used was. . .the AM/FM radio. That’s right, radio.

While that figure is down from 2020, when it was 81%, it is still significantly higher than any other form of audio:

Another interesting finding—related to all listening—is a finding about whether people listen with other people. As people age, communal listening declines.

The Boomers (55+) are far more solitary, with the frequently number plummeting to 10% and sometimes at 21%.

They very well may kiss less, too.

On the other end of going mobile, there is the increasing trend, apparently, for going nowhere.

A recent story in The New York Times pointed out that Harry Styles is performing 14 shows in Madison Square Garden between August 17 and September 21. Then he moves west to the Kia Forum in Inglewood, California, where there will be 15 shows between October and November.

Writer Ben Sisario goes on to point out that BTS, Maná, Adele, Katy Perry, and Miranda Lambert all have or will book extended runs, and he explains:

“According to talent agents and industry observers, the reasons include clever branding, the protection of artists and crews in the pandemic and a cold calculation of financial efficiencies. More concerts in fewer cites mean fewer trucks on the road and lower bills all around.”

Sisario cites an observation from Omar Al-joulani, Live Nation’s president of touring, who said there will be some 30 residency-type setups in 2023.

And the controversial dynamic pricing? Well, Live Nation, which reported a 40% increase in revenue compared to Q2 2019 to $4.4-billion, an 86% increase in operating income to $319-million, and a 50% increase in adjusted operating income to $480-million, claims, “we expect to shift over $500-million from the secondary market to artists this year.” In other words, the consumer—whether buying from StubHub, Seat Geek, a dodgy-looking guy with an inches-high stack of ducats, or Live Nation’s Ticketmaster—will still pay more. Live Nation will just punt some of its proceeds to the artists.

Here’s something to consider: in Live Nation’s Q2 revenue ticketing accounted for $575,300,000 million. Let’s say that that number holds for all four quarters of the year. That would be $2.3-billion. Sort of makes that $500-million spread across numerous acts (if they had 12,500 events in Q2, then it could be 50,000 events for the year) drive a consideration of buying the tickets from that dodgy guy when you consider the delta between Live Nations’ take from dynamic pricing and the payoffs to the artists.

Just don’t kiss him. HSV-1 could be the least of your worries.