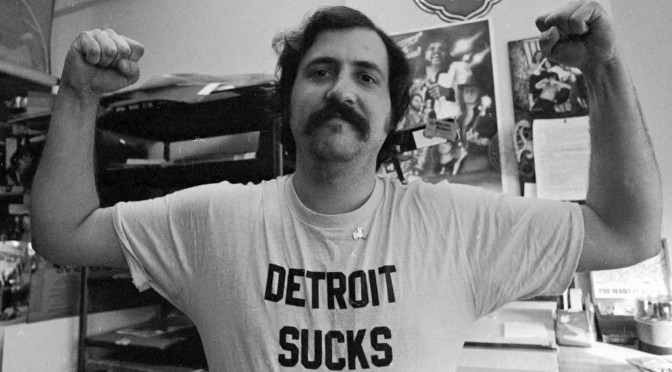 Creem Magazine, RIP 1989, is coming back. An initial reaction, of course, is “Bow Howdy!”, although there have been several returns from the grave in the magazine’s existence. Maybe this time it will take.

After all, the publication, which had its run out of Detroit for 20 years, has a natural demographic that is, well, reading, if much of anything, The Wall Street Journal or Bloomberg BusinessWeek to watch their 401Ks crater.

Odds are there aren’t going to be a whole lot of them who are going to consistently keen on reading about rock history from the Creem archives or buying merch with the brand’s logo on it (unless, of course, they buy the T-shirt to do the chores on Saturday, like washing the Lincoln).

The model for its return has access to its over “69,000 articles, reviews, images, and original advertisements.” That number seems a bit high, given that if there were 12 issues over 20 years, that would be 287.5 items per issue, so clearly they’re counting every tiny bit of what was the magazine.

Yes, yes, reading Lester Bangs as well as early Greil Marcus and Dave Marsh is certainly a worthwhile use of time.

And realize that it was a time rife with wonderful music to write about. Consider only a few of the releases of 1970: Get Yer Ya-Ya’s Out!, Johnbarleycorn Must Die, The Man Who Sold the World, Gasoline Alley, Morrison Hotel, Band of Gypsies, Back in the USA.*

But when you move from that it probably becomes an exercise in total nostalgia for nostalgia’s sake. Consider, for example, that the ads are embedded: this isn’t like the posters and postcards available from Wolfgang’s Vault as much as it is a commercial chronicle of days gone by, the sort of thing that is the Rock and Roll Hall of Fame meets the Henry Ford Museum. Ads from major record companies decrying “The Man” were appropriate then and seem craven now. The only ad that really has legs from that period is the Maxell “Blown Away Guy,” which appeared in 1980.

The financial approach for this reboot is to charge $5 per month for digital access to those archives or $79 per year to get that access as well as four copies of the quarterly print publication that will be created, presumably, as something of a top-drawer publication for those who, more than half a century ago, probably hid magazines under their bed.

Then for those who want to sign up at the “Fan Club” level, for $129 per annum one gets an undefined “annual gift ($60 value)” the four issues, the year of digital access, and 20% off on Creem merch (the $79 package only provides a 15% discount). (Presumably the undefined annual gift is valued at $60 so that Bob from Accounting who wonders whatever happened to his copy of Atom Heart Mother can realize that it is a $10 “savings” compared with the lower tier [129-60=69].)

Contemporaneous, in some regards, with Creem was Tiger Beat, which was founded in 1965. However, covers of that publication, targeted at adolescent girls (and arguably Creem was primarily targeted at adolescent boys), in 1970 featured David Cassidy, Donny Osmond and, especially Bobby Sherman. Tiger Beat had a run in print until 2019. It came back to life for a bit as a website yet it seems that that it is moribund.

All Things Must Pass also came out in 1970. George was right.

What is probably going to do far, far better than the resurrected Creem is a subscription media company named Scriber. (This should not be confused with the oxymoronically named Truth Social.)

Scriber is being backed by the non-Grammy-Award-winning Jonas Brothers. (Although the boys did pick up an MTV Video Music Award in the Pop category in 2019, and when you think about MTV circa 1982 (“I Want My MTV”) and what it became by 2019 it makes the return of Creem seem all the more problematic. Here’s something that seems exceedingly strange: from 1981 to 1985 50% of MTV was owned by Warner Communications—and the other half by American Express. What do you have in your wallet, prospective Creem subscriber?)

Scriber is a means by which celebrities can generate “exclusive content” with their fans. Communications is via SMS messaging. (No need to pay Apple or Google.)

Celebrities decide how much they’re going to charge their fans on a monthly basis and Scriber takes $1 from each subscriber. The Jonas Brothers are charging their fans $4.99 per month for the ability to almost instantaneously get what Tiger Beat readers had to wait weeks to access (and Tiger Beat didn’t include dreamy videos).

Here’s some frightening math: the Jonas Brothers, as a group (Joe, Kevin and Nick have their own massive numbers), have 7.2 million Instagram followers.

Oh, I failed to mention that as part of the Creem $129 Fan Club package there is also “Exclusive cool shit.”

Somehow I think the JoBros are going to come out ahead.

*Back when Creem still had all of its own parts and wasn’t some sort of reassembled cyborg, people in Detroit who cared about what was going on in a socio-political-musical sense turned to the Fifth Estate, a tabloid newspaper that John Sinclair did no small part of promoting. And via Sinclair, the MC5 was something of the house band for the paper.

One thought on “The Defibrillator vs. the Money Machine”