Mm. An in-store by hip, rising Austin band Knife in the Water. You can’t get much better than that, I thought as I settled down (with a good-sized crowd) in the sultry May heat on the disagreeable acrylic carpet of Austin record store 33 1/3. For one thing, we had a perfect view of the trio (they’re a trio for the moment, but just finished a country-wide tour as a five-piece), and could comfortably observe the nonverbal communication between main singer/guitarist/songwriter Aaron Blount and keyboardist/vocalist Laura Krause. This communication was important because, as Laura told me afterwards, they’d never performed a lot of the material they played that day. This accounted for a slightly tentative feel to certain sections of songs, but it didn’t detract, in fact it added to their effectiveness because the songs, with their dreamy, mezmerizing melodies and lyrics, are trance-y and unpredictable, so at times it was almost like the two musicians had just thought of a new harmony or melodic turn.

They began with a soft, dreamy tune with the lyrics: “As I was coming to, and you were coming to/o” – a song that seemed to embody the sleepy feeling of summer, too many late nights but plenty of lovely wakings up. The refrain went: “Cause when I saw you last, was in broad daylight” and as they repeated it, the vocal interplay was fascinating – they use odd, off-key harmonies that sometimes pull the songs into strange areas before they melt into perfect harmonic agreement.

It’s not an exact analogy, but you could say Knife in the Water are to country music what Belle and Sebastian are to rock. They share with B&S a love of 60s-influenced, ultra-sweet harmonies, and a knack for writing extremely pretty, often gentle songs (though they played one really great rocker). Aaron sings some fairly straightforward tunes, some of them reminiscent of early Leonard Cohen, and Laura chimes in with a daring off-center harmony. Their two voices blend beautifully, Laura’s soft, tender singing adding an almost unbearable poignancy to their sadder numbers.

Also subverting their moments (though they don’t have that many) of straight country sound is pedal steel player Bill McCullough. He plucks the instrument hard, punctuating the songs with muffled harmonics that add an interesting Japanese-tinged element into what is already an experimental mix.

But in case I’m making it sound like they’re some kind of trance band mostly interested in harmonic experiments, let me stress again that this band’s songs are exceptional – memorable melodies; intelligent, imaginative lyrics; cool, interesting rhythms. The only thing Knife in the Water needs before it’s a complete knock-out, from what I observed, is a bit more polish. And the lack of it was probably due to the sudden change in their line-up and the unusual setting. As Aaron remarked, observing the fluorescent lights and his circle of seated observers, “I feel like we’re playing in the public library or something.” Partner Laura Krause smiled conciliatorily at the crowd.

I bought their EP, Crosspross Bells, and recommend it highly. They have two other releases out – 1998’s Plays One Sound and Others, and Red River (2000), which was awarded the #14 spot in Spin’s Top Albums of 2000. You could probably order Crosspross Bells from their record company, Peek-A-Boo Records (www.peekaboorecords.com). But watch for Knife in the Water when they come to your town, because they tour a lot and they’re great live.

I was bone ignorant about Certain General when I went to see this show, assuming they’d be a fresh-faced gang of newcomers who would not know life’s darker corners or its propensity for horrid gaping disappointment. Wrong! Certain General turned out to be unbelievably smart and cool. Too bad for the majority of New Yorkers who missed the show. The crowd at Don Hill’s was on the small side, but we were riveted by the band’s thudding, minimalist rhythms and boxy atonal melodies carved out by endlessly inventive guitarist Phil Gammage and bassist Parker Dulany. The songs were set up with martial regularity and force by drummer Marcy Saddy. But Dulany’s vocals, and his presence as a frontman, were what really made the set work. 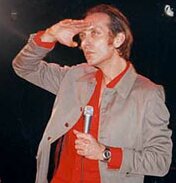 Some bands are worth watching just for their frontpersons. Certain General are one of those bands. Parker Dulany (that name!) embodies subtle but powerful charisma with his pouchy, sad eyes and slender scarecrow elegance. He sang in a haunted, atonal (again) voice that recalled David Byrne at times, David Bowie at others, and I swear a kind of depressive rockabilly affect was in there too, though someone I met at the show disagreed vehemently with that idea. It’s true that the band never sounded like rockabilly, for one guitar lick or drumbeat. The songs have the fast, zig-zag feel of early 80s post-punk, and for good reason – it turns out Certain General began in 1980, in the East Village, and achieved wide success, especially in France. This was a sort of reunion show for them, in honor of a new 2-cd deluxe set that they’re releasing called An Introduction to War.

It was a flashback feel, the whole night. Certain General sang songs that criticized military action, but in a flat-affect, ironic style that reminded me of how much social criticism sprang out of the vicious ironies of the Sex Pistols. “I have a gun, I want to shoot my gun,” one Certain General song goes, over and over (I’m paraphrasing, I think those were the lyrics) and it’s reminiscent of Talking Heads songs like Don’t Worry About the Government (the one with the line “Some civil servants are just like my loved ones”). Compare that to the personal, smaller-canvas furies of a band like Nirvana. But back to the music: the songs had great beats and what sounded like interesting lyrics – as usual the vocal mix was a bit muddy for my taste. The band seemed pretty arty and non-delivering of easy rock pleasures like nice harmony or emotional surges of feeling for the first few songs, but as the show went on they began to play slightly longer songs that resulted in Dulany occasionally throwing his head back, eyes closed, losing himself in vocal intensities, and that was truly great. Within the American tradition of intelligent, storky, white-boy frontmen, his body language is the loosest and he seems to have the most soul. The French don’t always choose the most worthy American icons to elevate, but they seem to be on to something with Certain General.

END_OF_DOCUMENT_TOKEN_TO_BE_REPLACED

Glorious Noise is happy to introduce a new member to the team. Kristy Eldredge is a writer living in Brooklyn. Her new feature article reports from New York on her finding true love in the arms of Quasi. Be sure to welcome her to the group and post your thoughts in the discussion section.