An update to the story of the band who got beat up by cops, the Fork gets the band members’ side of the story: “They were arresting anybody who asked a question,” Vogel said. “All these young kids who were at the show and just wanted to know what was going on, they got arrested.”

Remember kids, you have the right to remain silent. That’s pretty much it. I wish the Fork had asked what the charges were. My guess is “hindering and opposing a police officer.” I was charged with that once for simply asking a cop who invited him into a party I was attending. I spent several hours in jail until my posse rounded up the $500 bond to bail me out. I eventually spent $1,000 on a lawyer and the charges were dropped contingent on me waiving my right to sue for false arrest.

There’s a lesson there, somewhere. But all I got out of it was learning that cops can cost you a lot of money for no good reason at all. Sure, I could’ve taken it to trial, but my lawyer advised me not to; it would have taken a lot of time, and there was very little chance of me being awarded any damages since it really didn’t cost me anything (no missed work, no obvious pain and suffering, etc.).

But I’ll always remember officer Scott Ramburger, GRPD badge #367. And so will karma.

Also noteworthy: “No formal public complaints [against the officer] had been lodged as of Tuesday afternoon, according to HPD Capt. Dwayne Ready.” I never filed an official complaint against officer Ramburger, and I’ve regretted it ever since. It would’ve been a pain—you had to go to the police station, and I just never bothered. But I should have. These kids in Houston definitely should.

Brandon Flowers is a fucking moron. NME has excerpts from The Word‘s cover feature on the Killers, and it’s almost painful to read this dipshit’s sophomoric ideas about Green Day, Bruce Springsteen, and an artist’s role as foreign ambassador.

Some examples of his idiocy:

“You have Green Day and ‘American Idiot‘. Where do they film their DVD? In England. A bunch of kids screaming ‘I don’t want to be an American idiot’ I saw it as a very negative thing towards Americans. It really lit a fire in me.”

Why’s that, Brandon? Because you’d prefer everybody to be as idiotic as you? Did you ever consider that the message of Green Day’s album might have been to encourage American kids to not be idiots. Is the true intention of lyrics such as “Don’t wanna be an American idiot / One nation controlled by the media” a little too obscure for you to figure out? Hint: Green Day is advising people to think critically about what they see on television…

“You have the right to say what you want to say and what you want to write about, and I’m sure they meant it in the same way that Bruce Springsteen meant ‘Born In The USA’ and it was taken wrongly, but I was really offended when I saw them do that.”

Ahem. This mental midget really shouldn’t be allowed to ever mention Springsteen again. Seriously. The song “Born In The USA” is even more critical of the United States than anything Green Day has ever released. Bruce is actually one-upping Kanye West and saying that not only does the American government not care about black people, they don’t care about anybody!

“People need to see that, really, there are the nicest people in the world here! I don’t know if our album makes you realise that. But I hope it’s from a more positive place.”

Yes, we’re all very, very nice. Perhaps the nicest people in the world. And we have the best facial hair, too.

Check out this awesome animation of your favorite album covers. Hilarious.

“Roger Daltrey has been a world-famous star since the early 1960s when he began his career as the lead singer of The Who, and has since become one of the most popular vocalists in rock music history.” So claims a press release from CBS Entertainment, which draws attention to the fact that Daltrey is going to have a role on a forthcoming episode of CSI: Crime Scene Investigation. “World-famous star.” “Most popular vocalists in rock music history.” Well, it would be hard to disprove that, although the pneumatic praise is a little humid and musty.

“Daltrey is currently on a major worldwide tour with The Who, promoting their current album, Endless Wire,” the release notes. Here is something that can be completely disproved. When Daltrey became a “world-famous star” it was with a band consisting of four people. Two of the four are dead. Now Daltrey and one of them, the guy who wrote the song that’s used as the theme song for CSI, are out touring. That’s 50%. Which effectively makes it a duo. “The Who” does not exist, marketing notwithstanding. “The Who” is effectively a part of “rock music history.”

[To put Daltrey’s appearance on CSI in perspective, consider this: Mr. Britney Spears, Kevin Federline will be guest starring in tonight’s episode – ed.]

Yipes! If you own a venue that features live music, be sure to either tell your artists never to play covers, or else you’d better remember to pay those ASCAP thugs their grift…

Restaurant owner says songs may cost him his business:

Dorr says a rep from the American Society of Musicians and Publishers paid an unannounced visit to his restaurant one night and heard covers of the songs performed by local band “Black Notes.”

Because his place features local musicians and covers are rare, he didn’t think he had to pay the musicians and publishers group an estimated $2,000 to cover performances of copyrighted tunes.

But the owners of the songs, including Wonder and Hendrix’s estate, say he does.

Now they’re suing Dorr for copyright infringement – and they’re seeking payment of between $750 and $30,000 for each song, along with attorney fees.

And this is supposed to help artists somehow? Isn’t copyright meant to promote the arts? How’s that, by closing down every fucking coffee house in America?

Section 8 of Article I of the United States Constitution gives Congress the power “To promote the Progress of Science and useful Arts, by securing for limited Times to Authors and Inventors the exclusive Right to their respective Writings and Discoveries.” You think this is what the Founders had in mind? Somehow I doubt it. 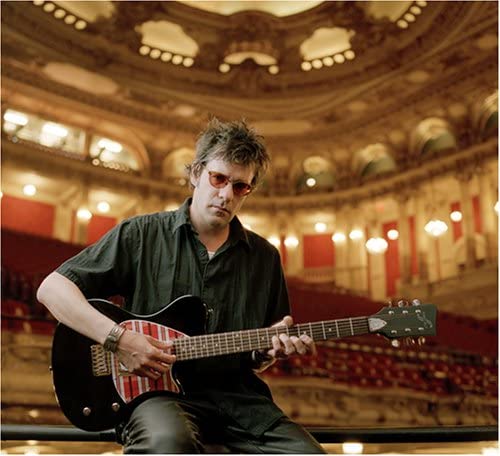 Check out this short film on Chicago’s own the Blisters. Yes, that’s Jeff Tweedy’s son on drums.

The Blisters previously on GLONO here and here.

The season premier of Saturday Night Live is always a bit sketchy (pardon the pun), especially when the show is in a “transition” year and has cut some cast members. This year’s debut was an exercise in “almost.”

This week’s host, internet comedic phenom and chronically over saturated Dane Cook, was almost funny. His monologue was a four-minute sample of his stage show, which is full of near clever observations and all but engaging physical comedy. The first show of the season sets the tone for the year. As the host for the season opener, Cook was…well…less than.

And then there was musical guest the Killers. Front man Brandon Flowers was decked out in a creepy moustache and oddly well-fitted western wear that seemed to be ripped right from the cover of the latest Urban Outfitter catalog. Jerking around and singing almost on-key, Flowers seemed to be trying a bit too hard to be weird. Crsipin Glover, he ain’t, lo though he tries.

If Saturday’s show is any indication, we may be heading to another dark chapter for the longest running comedy sketch show on television. Countdown to the obligatory SNL deathwatch: five…four…three…

So I was waiting for the hostess at a certain Chinese chain restaurant on Wednesday night in Chicago, and when she finally walked up to greet me she looked a little bewildered. As she was seating us, I heard a server whisper something about American Idol, and I looked over in the corner and lo and behold but who did I see? The Velvet Teddy Bear himself!

That’s right! I was in the same room with our second American Idol, Ruben Studdard, the man who beat Clay Aiken!

Of course, I was very excited so I said, “Hey, that’s Ruben Studdard!”

“Is it really?” asked the hostess, unsure of my credibility.

“Yeah, that’s totally him,” I assured her.

No respect! It seems like everybody in the world watches American Idol, and then a couple years later the winner walks into a restuarant to get some lettuce wraps and nobody even knows who he is? I mean, really. The guy won American Idol. It’s not like he was just in the Final 12. He fucking won it. And nobody recognizes him three years later? What’s up with that?

He obviously needs to hire a better publicity team. That, or maybe—just maybe—American Idol isn’t quite the force it’s made out to be… Could that be it? Nah…