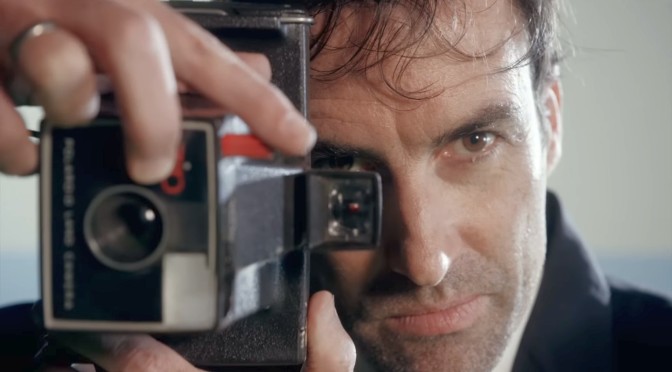 Directed by Matthew Daniel Siskin. From Inside Problems, out now on Loma Vista.

I don’t know about you but sometimes I kind of hate Andrew Bird because he’s so good looking. And talented. And cool. It’s not fair. Felt the same way about Chris Isaak. But that’s a “me” problem. It’s not his fault he’s got it all.

Bird says this new song is about “digesting images from historic events and constituting a narrative for your memory. ‘Tell us what you think you saw. Make a picture.’ We saw a lot of horror and darkness and a lot of inspiring bravery. So, what’s the story we tell after digesting? What’s the synapses’ synopsis?”

Don’t you know that I’m an irrepressible optimist
Working with a fatal flaw
Running in the streets
Like feral cats will be hard to miss
Take a knee and raise a paw.

The video is a combination of implied gore and herding oversized cats. In a fair world, this would go viral. The internet loves cats! And extracting film stock from your veins. Right? 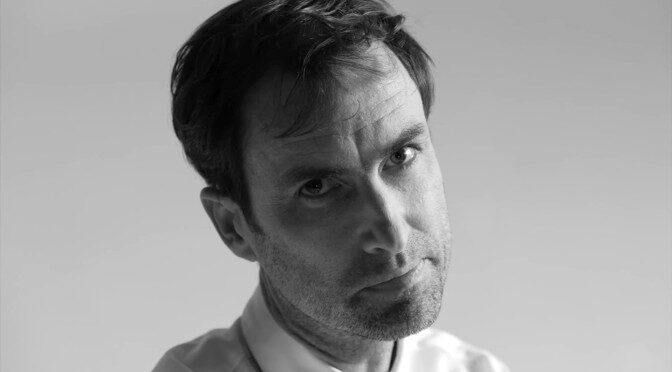 In the 1919 in the middle of the first World War and an influenza epidemic, William Butler Yeats wrote a poem:

Things fall apart; the centre cannot hold;
Mere anarchy is loosed upon the world,
The blood-dimmed tide is loosed, and everywhere
The ceremony of innocence is drowned;
The best lack all conviction, while the worst
Are full of passionate intensity.

Doesn’t require much updating to be relevant today, does it?

In 1967 after spending some time with a bunch of filthy hippies in Haight-Ashbury, Joan Didion wrote an essay called “Slouching Toward Jerusalem,” taking its title from the last line in Yeats’ poem. In the preface of a 1968 collection of her work, she explained why the piece was important to her:

It was the first time I had dealt directly and flatly with the evidence of atomization, the proof that things fall apart: I went to San Francisco because I had not been able to work in some months, had been paralyzed by the conviction that writing was an irrelevant act, and that the world as I had understood it no longer existed. If I was to work again at all, it would be necessary for me to come to terms with disorder.

Andrew Bird says, “Didion was updating W.B. Yeats for the fractious 60s, this song takes it to the pixelated present where it’s not just society that is getting atomized but the self that is being broken apart and scattered.” In Yeats’ and Didion’s defense, I think that was implied all along. But as far as I know, neither Yeats nor Didion could whistle or fiddle nearly as well as Andrew Bird. 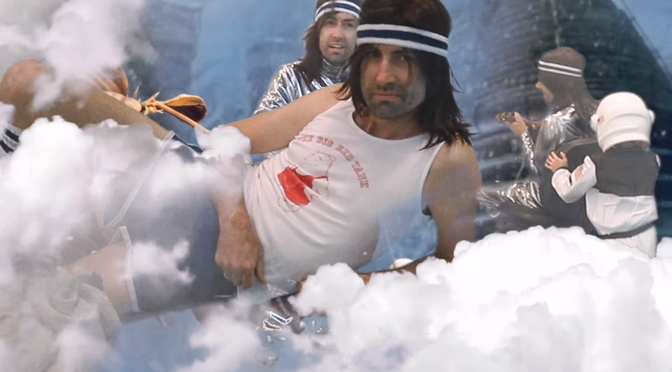 Directed by Matthew Daniel Siskin. From My Finest Work Yet, out now on Loma Vista.

Andrew Bird is having way more fun in his new video than the lyrics of the song might suggest.

Why don’t you come to bed
Instead of stumbling into the light
Of medicine cabinets?
Shaking out pills left and right

Looks like it was “take your kid to work” day on the set. Good times. 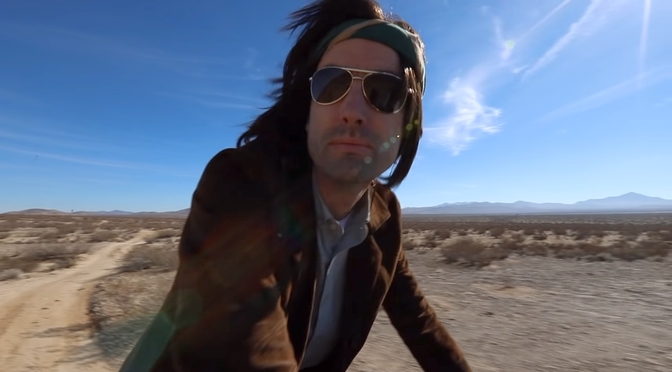 Directed by Matthew Daniel Siskin. From My Finest Work Yet, out March 22 on Loma Vista.

You know the story of Sisyphus: the Greek king condemned to to roll a big boulder up a mountain for eternity. As soon as he gets close to the top, it rolls back down.

Sound familiar? Sounds a lot like the whole goddamn world in 2019, doesn’t it? Feels like we’re all doomed to repeat the same mindless bullshit over and over, and the moment it seems like things might be getting better, we gotta start all over again.

Hopeful people say that the arc of the moral universe is long, and it bends toward justice.

Whatever gets you through the night, but it’s getting harder and harder to believe it.

Bird says the song “is about being addicted to your own suffering and the moral consequences of letting the rock roll.”

Keep pushing, people. It’s all we can do I guess. 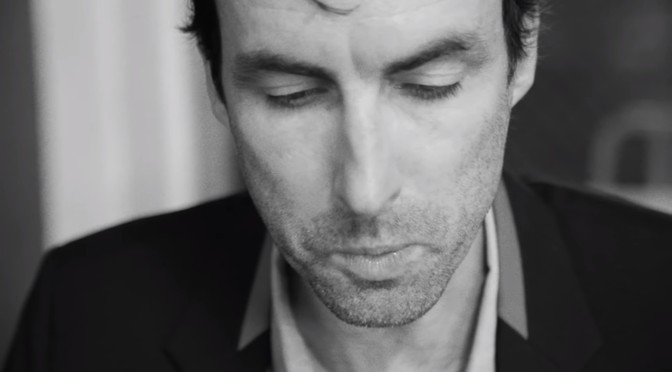 Andrew Bird always sounds cool and calm. Even when he’s scared and angry.

“Bloodless” has a jazzy, mellow vibe but its message is hardcore.

Bird says, “We find ourselves in a cold civil war. Everyone is playing their part too well. Certain actors are reaping power and wealth from divisiveness. Echoes of the Spanish civil war when fascists and clergy win because they put up a united front against the individualistic and principled (yet scattered) left. We can turn this ship around but need to step back and be honest with ourselves about what’s happening while it’s still relatively bloodless.”

NPR is streaming these albums unti their release dates:

AOL is streaming the following albums through Sunday, November 7:

• The Autumn Defense, Once Around (MP3)

Lots more below, including the Band on the Run reissue, and new collections from Elliott Smith, Smokey Robinson, and Ray Charles. Let us know if you hear anything good

END_OF_DOCUMENT_TOKEN_TO_BE_REPLACED 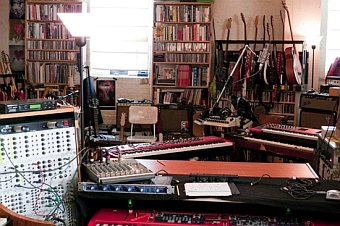 Just last year, musician Andrew Bird spent four days recording at the Loft. He spent the entire first day arranging the studio space just to get the right violin sound. Using microphones placed around the room, he was able to pick up the acoustics of his violin as well as the sound of the amps bouncing off the walls. The sixty-plus guitars sitting around the room all hummed along, as the vibrations from everything else shook and resonated the steel strings, adding even more texture to the sound. The Loft is, essentially, an instrument of its own.

Looks like they’ve done a fine job of replacing all the gear that Jay Bennett took with him after they kicked him out, ha ha. But do they have a Mellotron? There are apparently additional photos in the print version of the magazine.

MP3: Andrew Bird – “Oh No” from Noble Beast, out now on Fat Possum.

This song features all the things you love about Andrew Bird: whistling, nerdy smart lyrics, violin, plus hand claps. What more could you want? The album is a bit of a sleeper, but repeated listenings will reveal more and more.

With the economic crisis this country is facing right now we can’t afford Andrew Bird. There are too many jobless folks out there for us to allow Bird to fill so many roles by himself. In the span of an hour and a half and with the aid of multiple digital delay pedals and the sheer force of his talent, Bird displaced as many as an entire chamber orchestra by dint of sonic cloning. Imagine a world in which each one of us could simply conjure the idea of a car and then build it piece-by-piece before your neighbor’s incredulous eyes. That’s exactly what I saw in Portland this weekend and it is unsettling.

END_OF_DOCUMENT_TOKEN_TO_BE_REPLACED

The big news out of this week’s album sales is not in the Top Ten (nine of which were already there last week), but just beyond that into the 11-20 range. Specifically:

Noteworthy is the fact that Merriweather Post Pavilion “debuted at No. 38 two weeks ago on the Top Independent Albums chart purely on vinyl sales.” Clearly, they found their “room of bros to buy t-shirts and vinyl albums for bros who don’t have record players.”

If you give a crap, you can see the Top Ten after the jump…