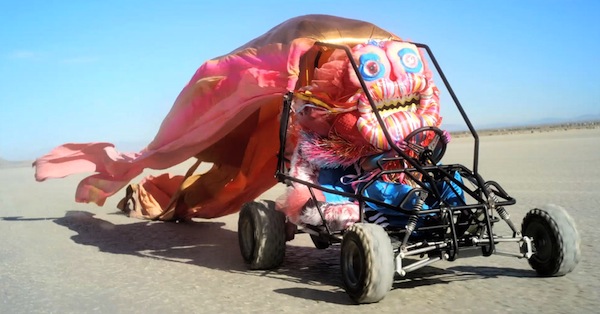 Jeez, how many videos are these guys gonna make for this album? By my count, we’re at five now. Good for them. It’s great to extend people’s attention span.

END_OF_DOCUMENT_TOKEN_TO_BE_REPLACED

The fourth official video from Merriweather Post Pavilion, which was originally released on January 20, 2009. So much for the three month cyle!

The video was directed by Jack Kubizne and stars Christian Gravino as the Boy, Mianarei A.G. Poole as the Girl, Lindsey Flexner as the Man in Overalls, and Jake as Ant Man. Plus various dogs, chickens, and turtles. I bet the parents of those kids had to spend a couple weeks teaching them that it’s not okay to dump paint on the rug and throw eggs at the walls.

Animal Collective samples the Grateful Dead‘s “Unbroken Chain” on their new Fall Be Kind EP. It’s apparently the first time the band has allowed the use of one of their songs as a sample. New York Magazine talked to Animal Collective’s Geologist about it:

We didn’t know that no one had sampled one of their songs before; we just thought it would be really expensive to do it. We had recorded a version of the track live on the BBC, and we sent it over to Phil Lesh. He really liked it, and the band didn’t ask for a lot of money. […] I have respect for the way that they did things. It’s weird to me that punks hated the Grateful Dead so much. They had the same spirit as punk rock. They would put on free concerts, and when they became a huge megaband, they stood up to giant ticket companies. They did things their own way. They were punk before punk existed.

I was initially going to make fun of him for confusing the “spirit of punk rock” with standard, run of the mill hippiedom, but then I thought about it a little more and realized that two of the major tenets of punk were D/I/Y and V/F/M (“do it yourself” and “value for money”). So yeah, I guess the Dead were kinda punk. While at the same time being the polar opposite of punk.

Stream: Animal Collective – “What Would I Want? Sky”

Video: Animal Collective – “In The Flowers”

The song kicks in at 2:30, so if you finding yourself nodding out, feel free to skip ahead. I’m still not convinced this band deserves the hype. But every time I find myself listening to them, there’s a point where I smile and say, I like this song. They’ve got something going on and I can’t put my finger on it. And, as my girl Martha Stewart says, that’s a very good thing.

I’m guessing they released this video now in order to remind everybody who’s compiling their “best of 2009” lists that Merriweather Post Pavilion was released in January.

END_OF_DOCUMENT_TOKEN_TO_BE_REPLACED

I watched this on TV and I kept wondering whether or not that crunching sound that comes in after the first chrous was intentional. It sounded a lot more “broken” on my TV than it does on the computer. But it doesn’t sound like that on the album. Gotta love Letterman’s crack about the “trick-or-treaters” at the end.

But you know who’s really funny? Norm MacDonald, who earlier in the show joked that watching the birth of his child was the most exciting moment in his life. Until he took crystal meth.

But oh, how about David Portner‘s “SPRING BREAK 2009” hoodie? Come on, I thought bros were post-irony nowadays. Are we already into post-post-irony? Oy, who can keep up?

Two years (to the week!) after the release of Person Pitch, Paw Tracks releases a trippy new video for “Take Pills.” Who knew pandas had such long tails? Directed by Brian DeGraw.