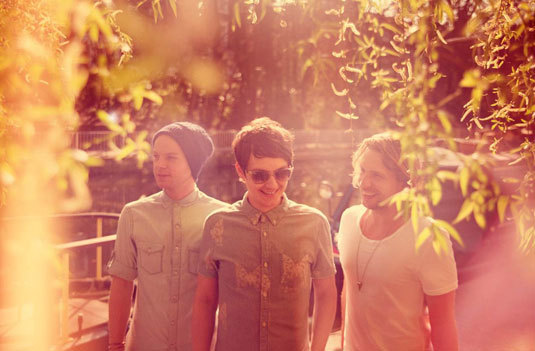 These are from Hamish from Animal Kingdom.

The whole thing is a buzz, from meeting your heroes back stage to getting up and performing in front of thousands of people.

The mud at some of the UK festivals is crazy some years – you feel like you are in a war zone.

Yeah, loads of times. First festival was when I was 15 back in England. I loved it and then started going to multiple festivals every year since.

We have had a couple of nasty crew members in the past but everyone packs their toothpaste these days.

I bought a 2 Bears remix of Disparate Youth by Santigold. It’s pretty fantastic.

I studied at U of I in Champaign-Urbana so spent a year around Chicago. I love the history and the beaches around Lake Michigan in the summer.

I think they might have let us off as we’re not quite at the stage of harming their ticket sales yet!

We’ll be playing Michigan, staying in Wisconsin, unfortunately missing Iowa and Indiana this time and playing in Columbus, Ohio on the way, so hopefully we’ll get to see some of you!

A genius. I grew up listening to Jane’s Addiction. At least three of his records are stone cold classics.

Playing Friday, August 3 at 12:00 PM on the Google Play stage