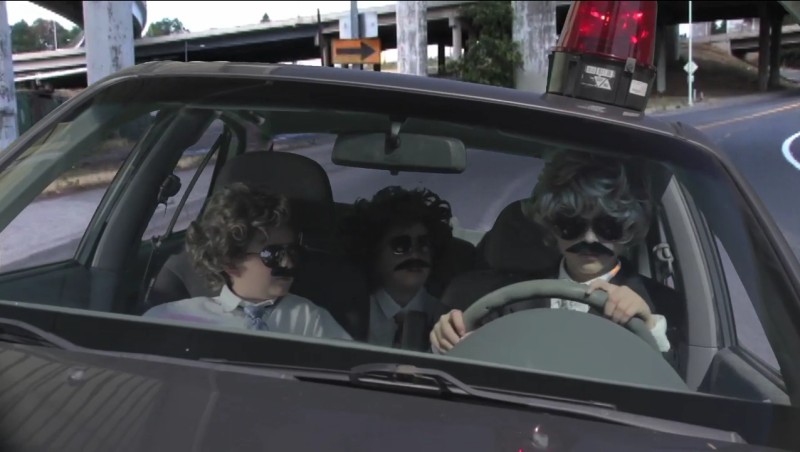 Like any good Gen-Xer I have been sharing my love for the Beastie Boys with my son. It’s become more focused and poignant with Adam Yauch’s passing and so when I see stuff like this I can’t help but smile and feel good knowing there are other cool-ass kids out there learning about the band. I love this video and you just know MCA would too. 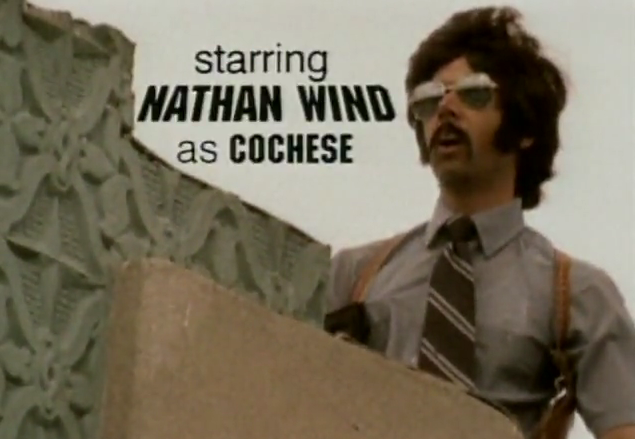 I knew this day was coming. When the Beastie Boys announced that Adam Yauch would be to unable attend the group’s induction into the Rock and Roll Hall of Fame my first thought was, Oh shit.

I loved the Beastie Boys the first time I heard them. A girl I knew told me there was a new song that I had to hear, that she knew I would love it. She was right, of course. What snotty 15 year old boy could resist the charms of “Fight For Your Right (To Party)”?

I bought the tape and enjoyed it for a while but then I pretty much forgot about them until college when friends turned me on to Paul’s Boutique. I remember thinking they were crazy to even bother giving that “joke” group a second chance. Boy, was I wrong. This was the very early 90s and I was just discovering Funkadelic and marijuana and N.W.A. and I was amazed these Bud-swilling dorks had gotten so cool.

I followed them from then on and started collecting the records they sampled on vinyl. In the early days of the internet I contributed everything I knew to a list of Paul’s Boutique Samples and References, including erroneously attributing the “Good God!” to Edwin Starr’s “War.” I tried for years to correct my mistake, but by then it was part of internet history. So yeah, that was me. Sorry.

I read an article somewhere that compared the three Beasties to three parts of the human psyche. Adrock was the id (impulsive), Mike D was the ego (organized), and MCA was the superego (the conscience). This always made sense to me and these verses from “Sure Shot” seemed to prove it:

MCA:
I want to say a little something that’s long overdue
The disrespect to women has got to be through
To all the mothers and sisters and the wives and friends
I want to offer my love and respect to the end

Mike D:
Well you say I’m twenty something and I should be slacking
But I’m working harder than ever, and you could call it macking
So I’m supposed to sit upon the couch and watching my TV
Still listening to wax, I’m not using the CD

Adrock:
I’m that kid in the corner
All fucked up and I wanna so I’m gonna
Take a piece of the pie, why not, I’m not quitting
Think I’ma change up my style just to fit in

The theory oversimplifies things (in the next line Yauch rhymes about his underwear) but there’s some truth in it. And now the Beastie Boys have lost their conscience.

On January 7, 2011, in response to media reports that he had beaten his cancer, Yauch posted the following to the Beasties web site: “While I’m grateful for all the positive energy people are sending my way, reports of my being totally cancer free are exaggerated. I’m continuing treatment, staying optimistic and hoping to be cancer free in the near future.”

That didn’t happen. Cancer claimed another life. I’d love to believe that he’s in a better place, but I’m at least comforted by the fact that he’s no longer suffering from that horrible fucking disease.

He sold merch for the Specials and the Clash. He was the tour manager for the Beastie Boys at the beginning of their career. He got A Tribe Called Quest a record deal. But the first I ever heard of the Captain was in a column he wrote—”In Defense of the Mullet”—in the second issue of Grand Royal magazine, published in 1995. His irreverence at the time was striking.

To me the Mullet is as American as pick-ups with rifle racks, tractor pulls, Wal-Mart, wet t-shirt contests, slapping your girl upside the head with a frying pan and living in the woods. In fact, I think it’s time the Mullet became the official cut of the U.S. Armed Forces. Fuck the crew cut. Crew cuts are soft. You won’t see no Mullet on Christopher Street. The Mullet is the white man’s jheri curl. Hell, maybe I will get me a Mullet after all. A Mullet, an El Camino with Nitros, a six of Coors, an eight ball of meth and just ride.

No surprise that his ever increasingly righteous editors at Grand Royal (the Beastie Boys) felt the need to tame his prose and censored his freeform “Beefs” column. Reading it again today, it’s kind of amazing they printed it at all, considering the shit he throws around about “Baba Yauch,” pistol whippings, “fat women in stretchy pants,” etc. Check it out and have your mind blown (click for larger, legible images). 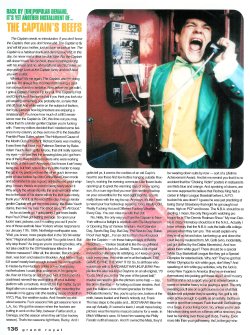 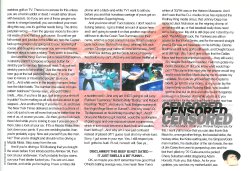 While I hadn’t followed the Captain in the 15 years since then, it turns out he became a major contributor to 4Chan and Encyclopaedia Dramatica, and even stirred up a bunch of trouble with the Church of Scientology, who allegedly poisoned his cat and got him arrested on charges of “Criminal Threats” (which were eventually dropped). He took his own life on Saturday, October 30.

The official word from the Beasties camp: “what the fuck captain !?! we love you and miss you.”

Not sure how much should be read into the latest email from Beastie Boy Adam Yauch, who is recovering from cancer… But anyway, here it is:

wanted to send this out to you guys in case you were into it, or wanted to give it to anyone who you think might be.

a few friends and i are meditating at the same time twice a day. 9:30am and 6:30pm eastern standard time, for about an hour and half.

we are picturing smashing apart all of the cancer cells in the world.

we are visualizing taking the energy away from the cancer, and then sending it back at the cancer as lightening bolts that will break apart the DNA and RNA of the cells. if you have the time, please join us in whipping up this lightening storm. mind over matter……

if you prefer to sit then sit, but if you are not used to meditating, or sitting quietly doesn’t sound like fun, put on some music and dance while you do the visualization, and if you want to do it at some other time, or picture curing some other illness that’s fine too. yoko will be joining the meditation by visualizing all of us dancing with joy to celebrate the world without cancer. all variations are welcome. this is really just being done with a wish for all beings to be cured of all illnesses and to find true lasting happiness.

i’ll also be saying prayers for the earthquake victims in tibet, so join in on that if you can too.

please feel free to pass this onto anyone who you think may find it interesting.

with all my love,

Can’t hurt, right? In the meantime, let’s also encourage all young girls to get vaccinated, which can prevent most types of cervical cancer.

This is awesome. BlackBook has dug up some old public access footage of the Beastie Boys rocking out shortly after the release of “Cookie Puss.” They still had Kate Schellenbach on drums, and she gets more camera time than Adam Yauch. But the best part about this whole thing is Mike D’s windbreaker.

Interview and intro after the jump… So crazy what 25 years will do to the world.

END_OF_DOCUMENT_TOKEN_TO_BE_REPLACED

It’s been a couple months since we heard from Beastie Boy Adam Yauch on how his cancer treatment. But we got an email this afternoon saying he’s “feeling healthy, strong and hopeful that [he’s] beaten this thing.” Since his surgery, he’s travelled to India where he saw some Tibetan doctors and visited some nuns:

they did a puja (religious ceremony) for me to help me get well. one nun said to me “we do prayers and then you are better.” so i’ve got that going for me, which is nice.

No new release date for The Hot Sauce Committee Part I yet, but Yauch is “hoping it’ll be in the first half of next year.” In the meantime, he’s lying low in Massachusetts.

Read the full statement after the jump…

END_OF_DOCUMENT_TOKEN_TO_BE_REPLACED

Received an email update this morning from Adam Yauch a.k.a. Beastie Boy MCA. He says he’s “rapidly recovering” from his surgery to remove a cancerous tumor in his parotid gland. He’s not taking any of the pain medication in an effort to speed the healing process.

In a few weeks, he’ll next start radiation treatments, a few minutes a day, 5 days a week, for about 7 weeks. Get well soon, Yauch!

END_OF_DOCUMENT_TOKEN_TO_BE_REPLACED

The Beastie Boys have canceled their summer dates and pushed back the release of their upcoming album indefinitely. In a video message on beastieboys.com Adam Yauch announced that he’d been diagnosed with a localized form of cancer in his parotid gland and in one lymph node. Yauch says that a complete scan of his body shows the cancer has not spread.

The Beastie Boys were scheduled to headline one night of this year’s Lollapalooza. Earlier this year Adam Yauch (a.k.a. MCA) told EW.com, “[The new album’s] a pretty weird record,” Yauch said, adding that unlike 2007’s all-instrumental The Mix-Up, the new LP will feature “a lot of rhyming and playing and sampling — all combined.”

Best wishes and hopes for a speedy recovery to MCA.

END_OF_DOCUMENT_TOKEN_TO_BE_REPLACED

Have you finished drooling over your newly remastered 20th Anniversary edition of Paul’s Boutique? Well, wipe your chin because now the Beastie Boys are doing the same thing with Check Your Head. And more! This time, they’re adding “16 bonus cuts, rarities and assorted nonsense.” And as with Paul’s, you’ll be able to get it in a variety of formats, including 4 LP vinyl.

This album, more than any other that I can think of right now, defines my college experience. And for a moment I knew what it was all about… Namaste.

The Chicago Tribune‘s Greg Kot got the scoop on the 2009 Lollapalooza headliners:

Depeche Mode, the Beastie Boys and a reunited Jane’s Addiction are expected to headline the fifth annual Lollapalooza Aug. 7-9 in Grant Park.

Though promoters would not confirm the information Friday, multiple sources inside the industry said the three headliners are a lock for the festival. Three more arena-level headliners are expected to be included when the complete lineup is announced next month.

Excited? Or were you hoping for something more…um…timely? I haven’t seen Jane’s Addiction since the first Lollapalooza in 1991. But then again, I’m old and crotchedly.