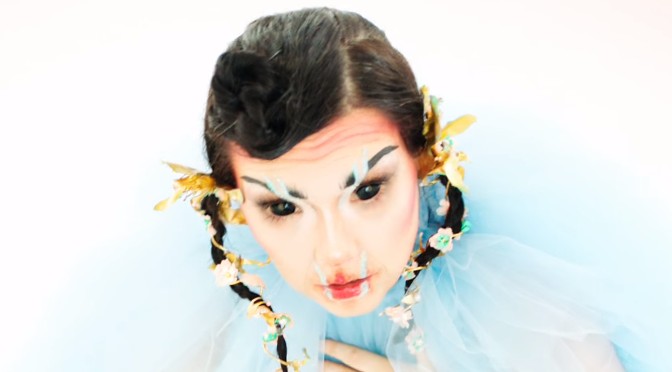 From Utopia, out November 24 on One Little Indian.

Bjork sure is a funny little fairy, isn’t she? Look at her flitting around all ethereally while singing about “excess texting” and “sending each other mp3s.” You have to love her. She might look like an anime princess but don’t let that distract you from what is ultimately a beautiful love song about “two music nerds obsessing” and “falling in love to a song.” Dreamy!

END_OF_DOCUMENT_TOKEN_TO_BE_REPLACED

The Smoking Gun has added a bunch of new backstage riders to its already impressive collection. You can tell a lot about a person by what they like to drink. Or, in this case, what kind of champagne they demand:

Rage against the cheap bubbles!

Over on Detour, JTL catches Bjork at the Fox Theatre in Detroit:

Even up close, it still isn’t clear whether or not Bjork is from the present, future, or some alternate past where animism inhabits not only humans and the lower kingdoms, but electronics and instruments, too. […] And Bjork kept everything on track throughout with that gigantic voice and the classiest hints of audience interaction, which elicited screams of pleasure every time. Did the kids up front dressed up in garish gold and streaks of makeup get tipped off on their heroine’s ensemble? Maybe Bjork really does travel through time, and she left Post-It notes in the past for each of them full of tips on mimicking her tour outfits. “Don’t have any gold taffeta? Use aluminum foil!”

Our man PLP covered a Bjork show for GLONO back in ’03.

Dig through Johnny’s GLONO archive, and relive your favorite moments from years past…

Bjork Who is it HD

and Front streets, the very beating heart of Toronto’s downtown waterfront. I

ferry once or twice, so I figured that was enough to go on. As I crossed

Front street, I fell in with a crowd of very young and enthusiastic concertgoers

who crowded together as they passed through the gates, waving their dayglo

plastic mallets in the air, the kind you usually see filled with candy. As

they broke into a chant (“One! Two! She’s Great!”) I thought that Bjork’s

I expected. It only gradually occured to me that this wasn’t a crowd of concertgoers but was instead a high school field trip.

END_OF_DOCUMENT_TOKEN_TO_BE_REPLACED

Since they no longer play videos on MTV (old news, I know), we must turn to the Web to get our fix that used to at least be satisfied by 120 Minutes. For a while there, I used to tape that show every Sunday night and watch it Monday evening. I was turned on to some great new music that way. I saw the Travis video for “All I Wanna Do Is Rock” on 120 Minutes back in 1997, and that’s still my favorite song of theirs.

But now musicians know how to use the Internet, and I’ve got a broadband connection, so here are three videos that I think you should check out:

Liz Phair – Down. This is a new song from Liz, and I still love her even though she moved to LA as soon as I moved to Chicago. She may be avoiding me, but she still writes great songs. This is a cool video with interesting (for once) use of that goofy, stop-frame/multi-angle technique (as seen in Gaps ads and football games).

Bjork – Pagan Poetry. First things first: Bjork’s boobies are featured in this kinky, unsafe-for-work video. The song is brilliant, and the video is disturbing.

Gorillaz – Rock the House. I initially gave the Gorilllaz album some shit because I was disappointed that there were only two songs with my man Del on them. I’m still upset about that, but I’ve gone back to the album several times recently, and have started to really like it. Except for the handful of songs where the guy from Blur sings in his annoying falsetto. Uggh. But a lot of it is really good. This new video from them is the other Del song.

If you know of other cool videos, please add them to comments section. It’s Friday and I don’t feel like working…

[Update: This was originally posted years before YouTube, but 15 years later we embedded working videos. -ed.]