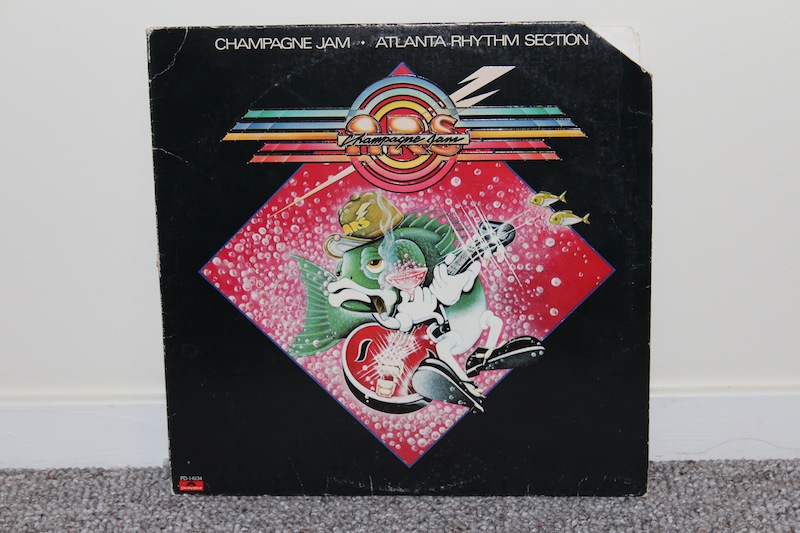 How do you go from playing a gig for the President of the United States on the South Lawn of the White House to nothing in three years? Because if I’m reading the Atlanta Rhythm Section’s bio correctly, these hillbillies from Georgia were an even bigger bust than Jimmy Carter, managing to squander a top ten album that went platinum in just six months in 1978 to have all but disappeared by the time Ronald Reagan took over in Washington.

Champagne Jam is worthy of every bit of its sales success, as it’s perhaps the smoothest blend of southern rock and pop ever recorded. That ARS began careening into obscurity immediately after releasing it only makes sense in the way that a redneck lottery winner can find himself broke after just a few years of living the good life – and have nothing to show for it but a monster truck and a Jet Ski.

Putting this one on my turntable, the first thing I notice is that the sound is fantastic. Champagne Jam was recorded at what was perhaps the pinnacle of analog recording technique and you can certainly hear it. Whatever you do, avoid firing up Spotify to listen to this, because it will not sound good. I wouldn’t even dream of owning this album in a format other than vinyl, not any more than I would consider drinking beer out of a plastic bottle.

The sound here is so live and real that it’s hard not to want to listen to Champagne Jam just to admire the precision of the recording. It’s no wonder, as this is a band that had made its living as session players, and they were bona fide studio pros. The guitar and bass tones are out of this world, fat and punchy. The vocals have that high-in-the-mix quality that I associate with 80’s Top 40 music, like Madonna and Wham. And the drums! On this album they sound rounded and full, like you can actually hear the air moving.

While not every cut on the record is worthy of as much praise as its overall sonic qualities, there are plenty of standouts. “I’m Not Gonna Let It Bother Me Tonight” may not be a lyrical masterpiece, but anyone who can’t get behind the notion that the solution to all our problems is to get out and have a good time should probably be listening to a different band. The title track is as catchy as a bass fishing tournament, with some nice little drum, bass, guitar and keyboard solos that really show off the tightness of the group. A shame that we have to wait until the end of side one to hear it.

Side two is even stronger, opening with “Imaginary Lover,” the group’s big hit, which charted as high as seven. It’s a medium-tempo track that’s so perfectly calibrated to the Lite Beer From Miller era that it sounds like any number of pop crooners could have paid to dub in their vocals. “The Ballad of Lois Malone” borrows that same great blues riff that powers ZZ Top’s “Jesus Just Left Chicago” and AC/DC’s “Ride On.” The final two tracks, “The Great Escape” and “Evileen” provide some measure of understanding for why Pandora will inevitably spit out Steely Dan within the first few songs of a newly created ARS station.

But please, don’t go that route. Yeah, I know, finding some modern way to listen to ARS might be more convenient or even put a few pennies in the pockets of these guys, but no matter how bad I feel about their blowing it 30 years ago, that’s no reason to compromise the joy of dropping your stylus on this album.

Runout Groove: A record as records were meant to be. The medium is the message.