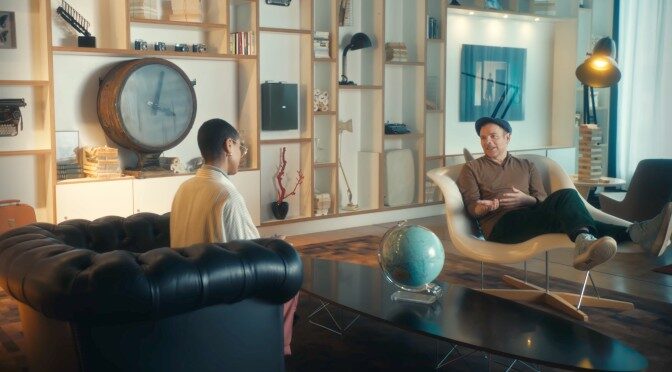 Directed by Kasparas Vidunas & Eric J. Liddle. From A Bit of Previous, out May 5 on Matador.

Unfortunate timing for poor Belle and Sebastian! Just as they’re ramping up to announce their first new album in seven years, the Russians invade Ukraine and start a war and make everything else seem meaningless or silly. They released this video for “Unnecessary Drama” and then immediately followed it up with a Ukrainian fundraiser where they pledged to donate all artist income from “If They’re Shooting At You” to the Red Cross, including streaming, digital sales, and publishing royalties.

So now that our priorities are established, we can get back to enjoying “Unnecessary Drama,” an upbeat B&S jam with a relentless harmonica line (humorously ripped on in the video when the band’s therapist requires Stevie to hand over his harp because it’s distracting the session).

There’s an array of douchebags lining up
To play their stupid parts.

I love it when Belle and Sebastian act tough and mean.

END_OF_DOCUMENT_TOKEN_TO_BE_REPLACED 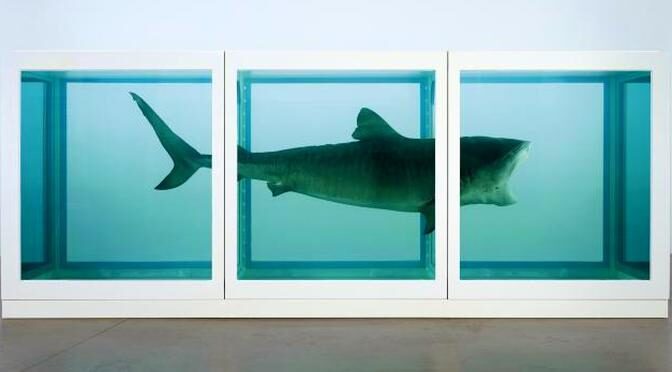 Damien Hirst’s artworks go for millions of dollars at auction. By several accounts, he is the richest visual artist in the world. The old caution that parents made to children: “Don’t be an artist. You won’t make any money until after you are dead” clearly doesn’t hold. Hirst is 56 so he has a long way to go, adding to his ~$400-million personal valuation.

Hirst is an artist who creates works that, by and large, are large such that they aren’t things that he can personally execute. Take, for example, what is arguably his most famous piece to date, The Physical Impossibility of Death in the Mind of Someone Living, which is a 14-foot-long tiger shark in a large aquarium (84 x 204 x 84 inches) that is filled with formaldehyde. Unlike those sailfish that are mounted on the walls of paneled basements that are meant to speak to the piscatory prowess of the residential fisherman, Hirst didn’t go out on a boat in subtropical waters, catch the shark, then bring it back to his studio, where he wrested the dead, slimy object, which probably weighs just under a ton, into the tank.

So because Hirst is as much an entrepreneur as artist, he cleverly created a company named “Science (UK)” that includes staff that at the end of 2020, numbered at 156. As was the case in the U.S., the U.K. had a government program established to address potential job losses caused by the coronavirus pandemic. Companies would get money in order to protect employees.

The same year it gave the shove to 63 of its employees.

END_OF_DOCUMENT_TOKEN_TO_BE_REPLACED 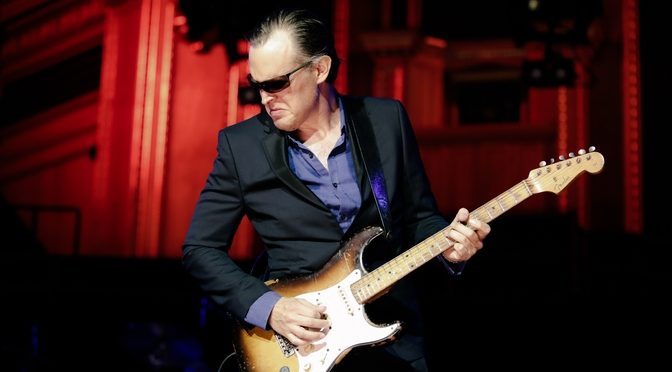 Joe Bonamassa, at age 12, in 1989, opened for B.B. King. Imagine: not only was he 12 but there he was, playing guitar ahead of one of the guitar-playing greats.

That worked out well. Bonamassa has become something of an axe-wielding phenomenon in the 30 years since.

Speaking of the situation that COVID-19 has brought on, Bonamassa said: “Musicians have a tough road ahead and this will help them regroup until they can head out on the road again when everyone gets a green light.”

He is talking about a live-stream fundraising event that he is holding tomorrow night (May 14, 8 pm EST).

Bonamassa is going to perform and talk about his vintage Fender guitars.

The proceeds will go to his Fueling Musicians Program, which is an emergency relief plan that was created by his 501(c) (3) non-profit organization, Keeping the Blues Alive (KTBA).

The program will provide musicians with financial assistance for living expenses as well as pre-paid fuel cards so they’ll be able to literally get on the road.

The Fueling Musicians Program is being supported by Fender Premium Audio and Volkswagen. (VW offers Fender audio systems in many of its vehicles.)

The event will be on the VW Facebook page.

Over the years I’ve cracked car companies on their sometimes-craven use of music.

Musicians need all the help they can get, and credit to VW for its support of Bonamassa’s efforts.

Incidentally, if you’re interested in contributing to the Fueling Musicians Program or if you’re a musician who needs help and would like to fill out an application form for assistance, go here. 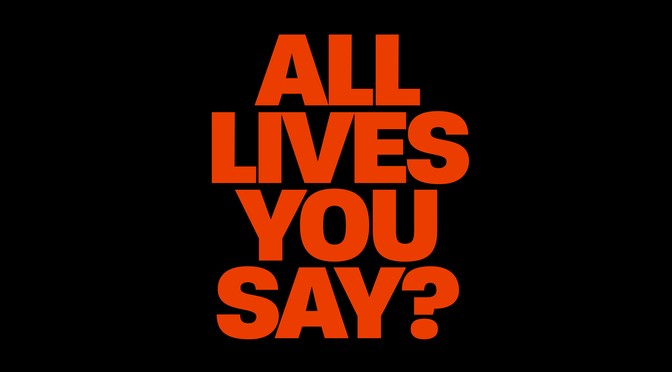 Proceeds will go to the Southern Poverty Law Center, in the memory of Jeff Tweedy’s father, Robert L. Tweedy (1933-2017).

“My dad was named after a Civil War general, and he voted for Barack Obama twice. He used to say ‘If you know better, you can do better.’ America – we know better. We can do better.” – Jeff Tweedy

This gesture, of course, takes on pointed connotations in light of the deplorable events in Charlottesville and our orange fuhrer’s tepid reaction.

END_OF_DOCUMENT_TOKEN_TO_BE_REPLACED 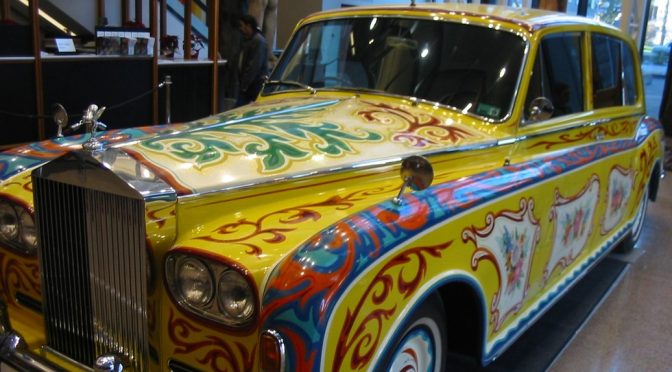 END_OF_DOCUMENT_TOKEN_TO_BE_REPLACED

It’s hard to get overly critical of an album that’s intended more as a fundraising item than an artistic statement, so allow me to mention first that Brent “Fathead” DeBoer’s first solo offering is being released to provide financial assistance to the Oregon Chapter of the National Multiple Sclerosis Society.

DeBoer is better known as the well-maned drummer for the Dandy Warhols, and The Farmer is an extended-play collection of material that he’s been working on with Dandy’s colorist Brian Coates for several years. At Coates’ urging, DeBoer released The Farmer to help with the MS cause, a condition that is unfortunately close to Brent’s home as his father suffers from the autoimmune disease.

END_OF_DOCUMENT_TOKEN_TO_BE_REPLACED

We’ve already ruffled some feathers with our views of bands who seemed to have used the disaster relief efforts in Haiti as promotional fodder so we’ll just let this video speak for itself.

Video: Shane MacGowan & Friends – “I Put A Spell On You”

The big story with this week’s sales data is the fact that the Hope For Haiti charity album is the first digital-exclusive set to top the Billboard 200. Billboard also points out that “as Hope for Haiti is sold through indie digital distributor INgrooves, it gives the Billboard 200 back-to-back independently distributed No. 1 albums, following Vampire Weekend‘s Contra last week.” So how about that? Hope for Haiti is the 13th “indie” album to top the chart.

And there’s even a legitimate indie debut this: Spoon‘s Transference (Merge). So along with Contra, that makes three independently distributed albums in the top ten. That’s gotta be a first, right? 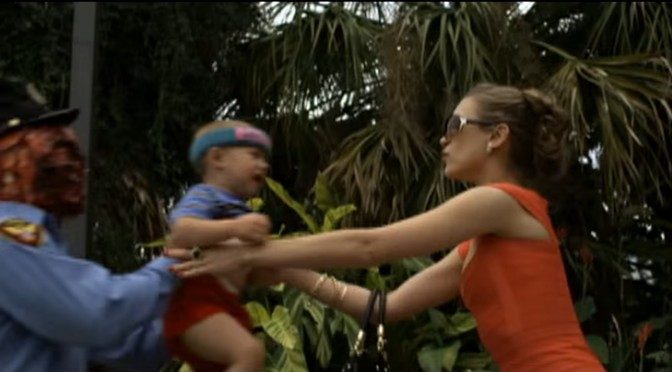