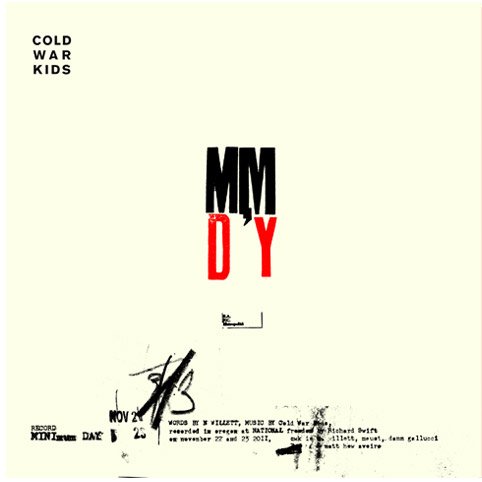 I’ve held a bit of an irrational grudge against the Cold War Kids since 2007 when we ran an interview with them by a new GLONO contributor whose writing read like P.R. copy. We tried to encourage him to put a little more personality in his stuff and he got offended. The whole thing left a bad taste in my mouth and for some reason I’ve taken it out on the Cold War Kids. It’s ridiculous, I know, but what can you do?

Anyway, this new song should clear away that baggage. It’s got more muscle than I remember this band having in the past. Not sure if that’s due to the addition of a new guitar player or what, but I like it. “Minimum Day” reminds me of the Go, which is certainly a good sign.

There’s also a dub version of the song available, but it sucks so don’t bother.

I was hesitant when I heard about Rothbury. Isn’t that the festival the Dead‘s playing this year? Where you…camp? On a ranch? Near the woods? With a shit-ton of tripping Dead Heads? Seriously?

Yes to all of the above. I’m not a camper, never really liked the Dead, entered and exited the jam band scene quickly when younger (Phish), and I still had more fun at Rothbury than I’ve had at any non-camping festival.

Why? It largely comes down to freedom. We may, technically, live in a free society and do mostly as we please, but of course there are the norms of society to consider, along with our own self-imposed behaviors that we use to “fit in.” This is why there’s nothing like being in the midst of huge crowds of people all simultaneously freaking out in one way or another. You can pretty much do whatever you want, it’s a level of freedom that is punctuated by the population of craziness going on around you. It’s a chance to let your freak flag fly; it is empowering to be immersed in a community that celebrates weirdness instead of disdaining it.

END_OF_DOCUMENT_TOKEN_TO_BE_REPLACED

Cold War Kids have the first single off their upcoming September 23rd Downtown Records release Loyalty to Loyalty available for download. You can also hear streams for “Hang Me Up to Dry” and “Hospital Beds”.

MP3: Cold War Kids – “Something is Not Right With Me” (link)