Reduced to cold statistics, Mark MacEwan and Carina Zercher initially seem indistinguishable from the rest of the Prozac Nation youth. Mark, 22, studies computer engineering and philosophy at Cal Poly State University in San Luis Obispo, CA, and embodies total punk rock rebellion in his attire, musical preferences, and everything but his irrepressible smile. Carina, 24, is a philosophy and film double major at nearby Cuesta College, a self-described Anglophile who traveled through Europe in the great quest to find herself come hell or hackneyed cliché. They are outgoing, intelligent, and enthusiastic for the future.

They also answer to their on-air handles, Mark Uranus from Planet Slitoris and DJ Red, at Cal Poly’s celebrated independent radio station, KCPR (91.3 fm). There, they raze the airwaves as volunteer DJs, two among the loyal legion of university students able to drop Fugazi bon mots and bicker on-air about frozen chicken prices. They also serve as the exclusive music directors; the presiding eyes and ears to the world of underground music for San Luis Obispo’s 45,000 residents. Their weekly director duties consume upwards of 15 hours and involve sifting through 150-200 received CDs to select less than 20 for addition to the station airwaves, running new-music meetings for fellow DJs, running the popular New Releases show, charting played albums, and dealing with record promoters with varying degrees of patience and outrage. They juggle their studies with the godlike power/eternal headaches of their roles – and while adults, students, and prison inmates appreciate their work, they still don’t get paid.

END_OF_DOCUMENT_TOKEN_TO_BE_REPLACED

Long-time friend of GLONO and frequent discussion contributor, Helen Wilson, dusts off the four-wheelers for a good cause…

As a past DJ and board member of a struggling college radio station that lost its antenna in a hurricane, I am all for attending any events that support college radio. The Loyola University Chicago radio station, WLUW, learned last fall that for the first time in its 24-year existence it would no longer be fully funded with tuition dollars. Due to the shaky funding situation, the station has launched a prolific fundraising initiative, including a Christmas show at Schubas, a series of shows at the Hideout, and the first annual “indie rock prom” at the Rainbo Roller Rink last Thursday.

In addition to being an advocate of college radio, I just couldn’t resist an event including indie rock and prom in the same phrase, and, moreover, that involved roller-skating. According to Shawn Campbell, Program Director, the event was concocted after she attended another fundraiser at the Rainbo and thought it would be fun to get people to dress up AND roller skate. A creative event, the indie-rock prom featured live music from three local bands and college kids dressed in thrift-store formal attire or costumes from various time periods. I went without a costume, but the chance to revive my long-retired roller-skating skills took me way back in time. 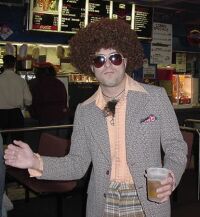 The event brought back memories of the countless evenings I spent at Sparkles Skating Rink in Atlanta between the years of first and fifth grade. Roller-skating parties are probably a vivid aspect of many of our grade school years and were certainly one my favorite activities. The public school I attended had a monthly fundraiser at the skating rink, including prizes for the class with highest attendance, couples skates with disco lighting, and the hokey-pokey. Besides these monthly roller-skating nights, of which I missed very few, birthday parties at Sparkles were quite popular. Despite all the time that I spent roller-skating as a kid, I hadn’t put on a pair of roller skates in at least 15 years. I quickly learned, however, that much like riding a bike, you don’t forget how to roller skate. Racing around the rink to the 80s pop music played between live sets made me especially nostalgic for my childhood days at the roller rink.

The roller rink was among my earliest venues for hearing popular music as a kid. Growing up with parents who didn’t listen to popular radio stations, discouraged MTV, and whose record collection was limited primarily to classical music and a few Dylan and Beatles’ albums, I didn’t have a lot of access to the music other kids my age were listening to. The roller rink was where I discovered Cyndi Lauper, Prince, and Michael Jackson. Favorite hits from my roller skating days include “Thriller,” “The Heat is On,” and “Man Eater.” And I can clearly remember rockin’ out air-guitar style to Bon Jovi’s “You Give Love a Bad Name” during breaks from skating. Perhaps my lack of musical knowledge as a 10-year-old and my under-appreciated skill at the air guitar explains my inevitable lack of a partner during the couples skate, but I think those nights at the roller rink had to have contributed to my passion for rock music.

For information on future WLUW fundraising events, check out their website at www.wluw.org. Donations can be sent to WLUW, 820 N. Michigan Ave., Chicago, IL 60611.