On our way back from All Good this year, we agreed it was – hands down – the best music festival we’ve been to. This is for a whole host of reasons, but must importantly, the music was outstanding. As I noted in our All Good preview, there were a number of bands we were excited to see. One of the great things about the All Good Music Festival is that they set up two stages right next to each other. While one band plays, they are setting up the next band on the adjacent stage. So there’s basically no gap to the music all day, once it starts, and you get to hang out in the same general area – not so much walking from stage to stage.

Add to that generally good weather, non-cramped camping accommodations, and extremely friendly staff, and you’ve got yourself a music festival to remember. Onto the musical highlights.

The music didn’t start until 7 on Thursday, but I could have gone home happy after the first night alone. Bob Weir, Bruce Hornsby, and Branford Marsalis, followed by Phil Lesh and Friends. Both sets were outstanding. I had earlier speculated that we might just see Weir, Hornsby, and Marsalis, without accompaniment. Or maybe just the addition of a drummer and bass player. What we got was Bruce Hornsby and the Noisemakers, with special guests Bob Weir and Branford Marsalis, playing a whole lotta Grateful Dead tunes. Plus two Hornsby tracks. The set started a bit rough, but it only got better as they gelled on stage. You can give their set a listen over at the Live Music Archive.

I also speculated a bit about who was going to be playing with Phil Lesh and Friends. I wrote that I hoped he would have Jackie Greene with him, and he was. Plus Joe Russo on drums, two of Phil’s sons, Grahame and Brian, and – a very pleasant surprise – Larry Campbell and Teresa Williams from Levon Helm’s Midnight Ramble. The set was like Phil Lesh meets the Midnight Ramble. Some Grateful Dead tunes were in the set and some songs that you might have heard at a Levon Helm show – “Chest Fever”, “Long Black Veil”, and “Keep Your Lamps Trimmed and Burning”, for example. It was my first time seeing Phil Lesh and Friends live, and this line up was a treat. You can listen to their set here.

The Flaming Lips were amazing! The first track they played, “Race for the Prize”, ended up being a top 5 rock and roll moment for me. I was standing stage left, in the photo pit, tucked in a corner by a big ass speaker, trying to take decent pictures of the insanity. Confetti and smoke all over the stage… I could have died happily in that moment.
They also played Pink Floyd’s “On The Run” – the psychedelic electronic experimental freakout from Darkside of the Moon – while Coyne climbed into the bubble and walked out over the crowd. He didn’t stay out as long as I’d expected to but it was a thing to behold nonetheless. If you haven’t ever seen the Flaming Lips, you should really try to work them into your live music schedule sometime. They will not disappoint. Q Magazine was spot on when they put the Flaming Lips in their top 50 list of bands you must see before you die. In the meantime, check out the video below of their whole show.
[youtube https://www.youtube.com/watch?v=vkt_y5F88-g&w=560&h=315]

Sunday was the hottest day of the festival, and I was feeling a bit physically run down by then. The good news was that the day’s lineup was a must see for me, the strongest afternoon of music the entire weekend. I think the organizers did a tremendous job lining up a solid block of great music to keep us going on Sunday afternoon. 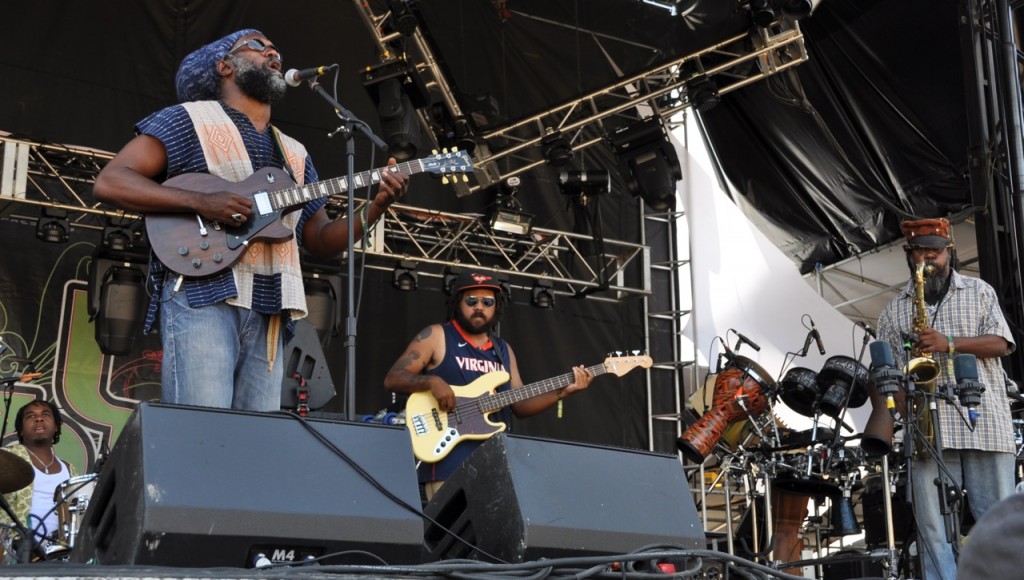 Corey Harris was the first artist of the day. He and his band, The Rasta Blues Experience, brought a rich mix of reggae, blues, rock, and funk to the stage. Harris plays guitar and lap steel. I really enjoyed his slide playing. Great songs that cut across genres, one to the next. Conscious music that’s only occasionally preachy. I would have liked to see him in an evening time slot, but I’m glad All Good introduced me to his music. 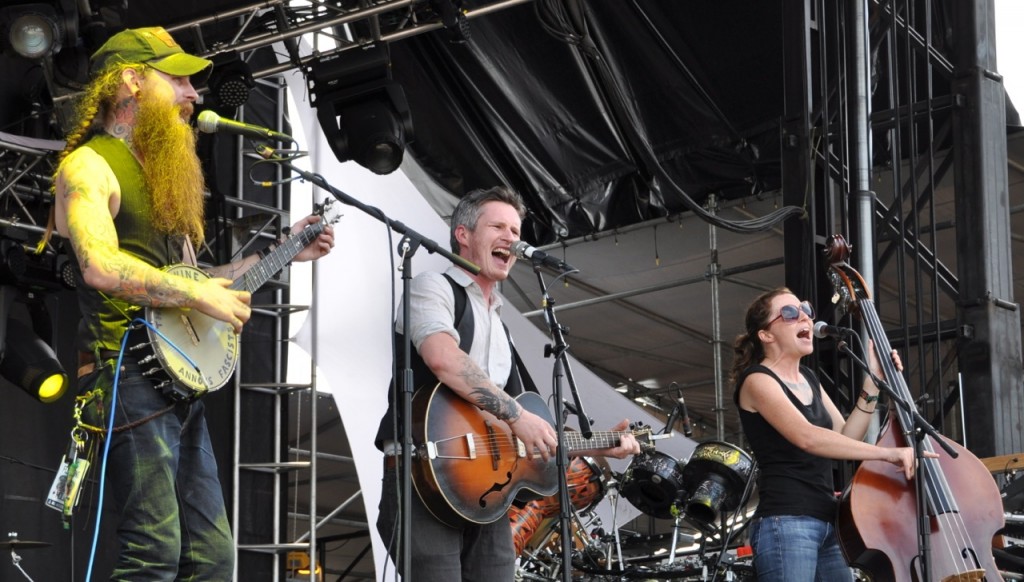 Devil Makes Three was also new to me. They play folk music that bounces with a punk rock sensibility. There’s some rockabilly in their sound, too. They are a three piece – guitar, banjo, and bass. All acoustic. The guitar player seemed to be the “lead” singer, with the other two hopping in on harmony pretty frequently. A particular treat form their set was their cover of Blind Willie McTell’s Statesboro Blues. Definitely want to see these guys again. 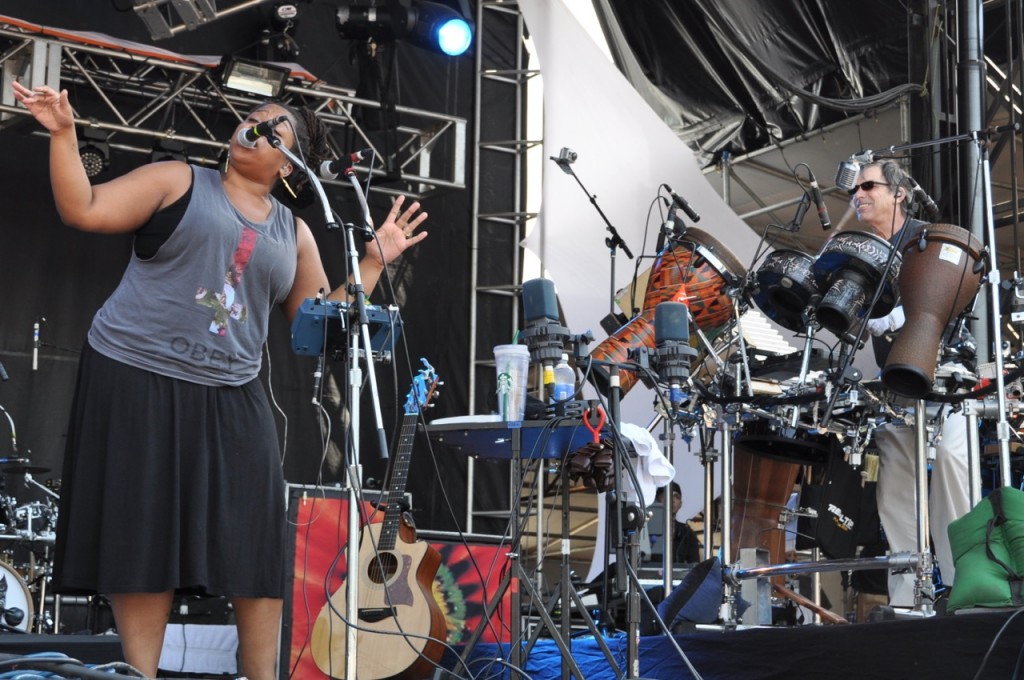 Well, I am now a big fan of the Mickey Hart Band. They had an hour and fifteen minutes to impress the crowd, and they did. Mickey has been able to move the furthest out from the “standard” Grateful Dead sound with his new band. He and his band have created something part Dead, part world music, and part the collective identity of the band members themselves. The lead guitar player is able to play in a completely non Jerry Garcia style of guitar playing – more Santana-ish to me – but will also weave some Jerry-ness into his playing when appropriate. Their version of “Fire on the Moutain” was a case in point. He broke out the familiar MXR pedal, or at least a reproduction of its sound – what my buddies and I called a “fart pedal” when we were kids. I love that sound almost more than life itself. I was dancing around like an idiot for the whole song.

So there you have it. Lots of great music at All Good this year, and I’ve only covered some of it here. I’m already looking forward to next year’s All Good. Hope to see you there.