“It has been nearly a year and a half since Thomas, at 78 one of the world’s leading musicians for more than half a century, announced he would be undergoing treatment for an aggressive form of brain cancer,” the New York Times reported in a story about conductors of classical music. The story, “A Mighty Generation of Musicians. A Moving Final Chapter” by Zachary Woolfe, opens with the conductor, Michael Tilson Thomas, leading the Los Angeles Philharmonic in Mahler’s Ninth Symphony. He is still working.

The story goes on: “The performance came just days after another miracle of a concert from an eminent maestro lately forced to reckon with mortality. On Jan. 6, Daniel Barenboim, 80, stepped down from the podium of the Berlin State Opera. . .after a year buffeted by health problems.”

Woolfe goes on to note that:

The tone of the story is quite elegiac. Writing of Barenboim’s conducting the Berlin Philharmonic in Brahms’s Second Symphony earlier this month:

“Without lacking vividness, the Brahms had a gentle cast in its opening; the allegro finale sent off bright energy, but its colors were the blaze of a sunset rather than daylight brashness. It was just the right amount of goodbye.”

END_OF_DOCUMENT_TOKEN_TO_BE_REPLACED

It seems as though it is an exceedingly long time since Neil Young pulled his music from Spotify* in protest to “The Joe Rogan Experience’s” position vis-à-vis COVID information. It has been less than a year. He was joined by India.Arie, Joni Mitchell, Nils Lofgren, and his former bandmates David Crosby, Stephen Stills and Graham Nash last January/February. Think of those musicians what you will, but odds are Daniel Ek wasn’t shaking clogs with the departure.

At the time, CS&N collectively put out a statement:

“We support Neil and we agree with him that there is dangerous disinformation being aired on Spotify’s Joe Rogan podcast. While we always value alternate points of view, knowingly spreading disinformation during this global pandemic has deadly consequences. Until real action is taken to show that a concern for humanity must be balanced with commerce, we don’t want our music — or the music we made together — to be on the same platform.”

That is in keeping with the peace, love and understanding ethos that characterized many musicians in the late ‘60s, early ‘70s, when there were positions taken about the war in Vietnam and the proliferation of nuclear weapons. They unapologetically took a stand.

Fast forward a few months, and here is David Crosby explaining why his music was back on the streaming service:

“I don’t own it now and the people who do are in business to make money.”

In March 2022—a month after the statement of with a noble stance—David Crosby sold his catalog to Iconic Artists Group. Arguably, Crosby became an iconic artist as a result of his worldview and expression thereof. (Yes, there is his talent, too.)

And like other people in general, Crosby had (and has) a need to pay the bills, and if he was going to be able to get someone to buy his work, then so be it.

The point here is not to pick on Crosby. At least he and his colleagues made a public stance, albeit ultimately a rather limp one.

END_OF_DOCUMENT_TOKEN_TO_BE_REPLACED

It’s hard to imagine that the douchebags in BrokeNCYDE even have parents, nevermind what those parents’ houses look like. But I imagine the same could have been said about The Byrds‘ former member and CSNYmega-hippy David Crosby (pictured with his father, Floyd) or Frank Zappa. That’s what makes this little gem on Apartment Therapy so cool. It’s a series of photos featuring rock stars from the 70s in their parents’ or grandparents’ homes. What an interesting, intriguing concept.

I picked up an interesting though ultimately disappointing bargain book the other day: Stand and Be Counted, by—get this—David Crosby. Yes, hard to believe the man whose first solo album was called If I Could Only Remember My Name actually managed to find the brain cells to write a nonfiction book, but Stand and Be Counted was published in 2000. (How I missed it then can probably be explained by a simple look at the price tag on my copy, down to $5.99 from original MSRP of $25—curiosity got the better of me at the price of a super-size Big Mac meal.) The book was written with Crosby’s friend David Bender, author of The Confession of O.J. Simpson, A Work of Fiction, and subtitled, “Making Music, Making History. The dramatic story of the artists and events that changed America.” The idea was to write a history of musician activism. As are most recent Crosby endeavors—from his artificial insemination escapades to the most recent CSNY album—it’s an idea that might sound good when you’ve had a little doobage, but its execution leaves something to be desired. 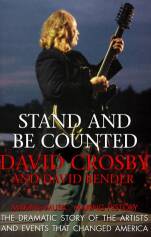 The main problem with Stand and Be Counted is, surprisingly, not Crosby’s writing. His voice comes across loud and clear, like a literary “Almost Cut My Hair”; while there are some really awful passages (“Taking a stand shows a depth of character and a generosity of spirit. It shows the quality in human beings that makes me proud to be one.”), hearing Crosby tell the story is one of the book’s pleasures. If he could tell a more complete story, one that included a deeper exploration of the politics of activism or looked at musician activism before the rise of rock music, it might be a great book. A glance at the contents betrays instead, we’re just getting Crosby’s personal story, his autobiography of do-good-ism, from protesting during the Civil Rights movement through his participation in benefit concerts in the 80s and 90s. Fun reading, a lot of it is—the tales of rich and famous classic rockers as concerned citizens are just the ticket to fuel the fame machine—but at the end, I’m left with an overriding, “So fucking what?”

Like most of the baby boom generation, Crosby once had ideals and goals that would have changed the power structure in America. As we know, they largely failed or at best fell short. But unlike most boomers, Crosby hasn’t gone on to admit defeat, get a suit-and-tie job, buy an SUV and a house in the suburbs, and join the Republican Party. He still hangs on to the myth, figuring if he keeps telling the story about how the hippies changed the world, eventually someone will believe him. This book is the most egregious example of this revisionist history that tends to accompany any discussion of “The Sixties” by those boomers like Crosby who won’t recognize the great sell-out of America that’s led us to the current State of the Union.

As wealth and power in the United States continue to concentrate in fewer hands, while our elected representatives lie and cheat, when corporations can run roughshod over everyone and everything, and we all sit and sweat in this even-hotter-than-last-year summer (yeah, it’s just those tree huggers who believe in global warming), I have a hard time giving Crosby the peace sign for all the “activism” he’s been involved with. Activism has a component lost on Crosby and most of his musician friends in Stand and Be Counted and that’s actually achieving political or social ends.